Gajser on his opposing moto results in Turkey 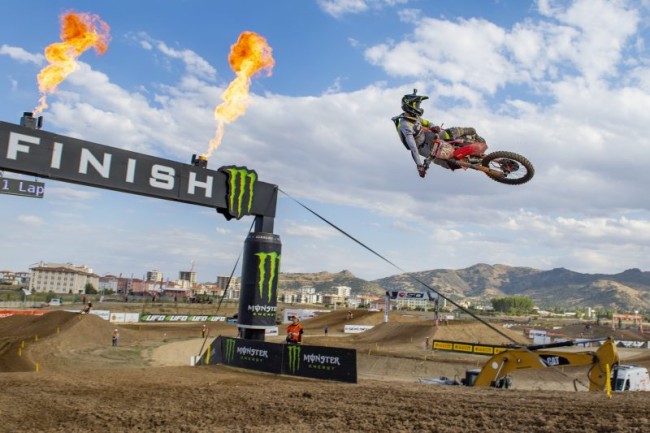 Team HRC’s Tim Gajser put in a superb performance in the second moto at the MXGP of Turkey to win his fourth race of the season and maintain his 13-point lead at the top of the MXGP championship table.

On a hot day at the Afyon track, the hard-pack terrain provided a real test for all the riders for the eighth round of the series but it was Gajser that showed his speed and determination in race two to take the 25 points after passing a few of his title rivals. Posting the fastest lap of the race, he stormed through the top riders before opening up a gap that nobody else was able to challenge, taking the chequered flag by almost five seconds at the end.

This was the perfect way to rebound from what was a slightly disappointing race one, where he got stuck behind another rider for too long and lost contact with those in front. He eventually crossed the line in sixth place, frustrated, but knowing that he had more in the tank for moto two.

The MXGP class now have a couple of days to recover, before lining up for part two of this Turkish double-header, which will take place on Wednesday 8thSeptember. As with previous multi-round venues last year, there are unlikely to be any major track changes but for the Honda CRF450RW rider, that should allow him to hopefully add to his four moto wins and three overalls that he has racked up in this intense 2021 campaign.

Tim Gajser: That was definitely two completely different races today, but I’m glad to have finished on a high note with that victory. In the first race I just got stuck behind another rider for too long and couldn’t find a rhythm. When I did get past, the front guys were too far in front so I couldn’t catch them. In race two, I got a better start and was in third early on. I quickly moved into second and then a few laps later I moved into first. Once I was there, I was able to pull away a bit and control the race until the chequered flag. Overall, it was good and I’m excited to come back on Wednesday and try and get the win here.

Marcus Pereira de Freitas: Once again, Tim proved that when he has a good start and is feeling comfortable, he is the fastest guy on the track. The first race, certainly didn’t go to plan but he showed in race two that his speed and stamina is at a very high level and it was great to see him win another moto. It is definitely a confidence boost, heading into the second round here on Wednesday and the team are working hard to make sure that he can challenge for wins once again.