Gajser on his MXGP of Riga: Not happy with how the day went 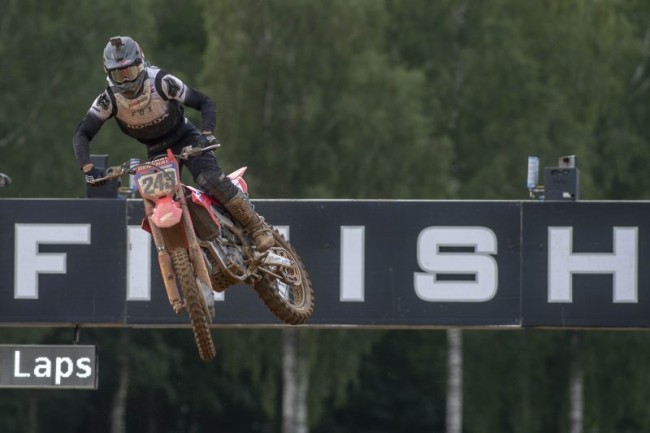 Team HRC’s Tim Gajser fought his way to a fifth place in the second moto at the MXGP of Riga, making sure that he stayed in second place in the world motocross championship. Fellow Honda CRF450RW rider Mitch Evans continued his recovery from the shoulder injury sustained earlier in the year, scoring his best moto finish since the first round of the championship in England.

It was a tough day at the office for the reigning MXGP champion as mistakes in the first moto meant that he had to pull off the track, losing him valuable ground in the title battle. This was after posting the fifth fastest time in a qualifying session that he led a large portion of. Unfortunately, due to the tight nature of the Kegums first turn, the smallest margin can mean the difference between a top five start and one that leaves you battling outside the top 10 and that’s where Gajser found himself in race one when he was forced wide. Due to the competitive nature of the class, it was a real dogfight and further mistakes were made and eventually he had to pull off the racetrack. Thankfully, his champion mindset kicked in for race two and despite another start outside the top 10, this time he put his head down and charged through to fifth place. This secured his second position in the championship which he holds by 13 points with four rounds of the season gone.

After getting caught up in first turn crashes in both motos on Sunday, Evans was once again unlucky as he was hit and knocked over in race one. Remounting down the field, he was then hit again on the first lap, making it impossible for him to get back to a point-scoring position. In race two, the CRF450RW showed its power and he rounded the first turn in third place, well clear of any trouble behind him, finally giving the Australian a chance to show his speed against the best motocross riders in the world. And while his speed was good, his lack of riding due the shoulder injury meant that he gradually fell out of the top 10. When the chequered flag was waved, Evans was in 15th position, giving himself something to build upon now in the few days before round five.

The team now have one more round in Latvia to focus on, when they line up for the MXGP of Kegums on Sunday 16th August for the third of this triple-header of races at this sandy circuit.

Tim Gajser 243
Obviously I am not happy with how the day went because I know I can do better than this. I wasn’t able to get good starts and on this track, that can cause really big problems. My aim now is to get back to enjoying my riding and focus on having fun at the track. Sunday will be the third event here and I still believe I can score good points and get myself back into the championship battle. It won’t be easy but I have a good team around me and we are all working hard to get the best results possible.

Mitch Evans 43
It was a bit of a better day than Sunday so I’m happy with how it turned out, even if it didn’t start off so well. The first moto wasn’t the best, after getting taken out in the start and then again later in the lap so I went into the second race with the mindset that it can really only get better from here, which thankfully it did. I ripped a good start and was able to hang with the top guys but then my lack of bike time caught up with me and I was able to bring it home in 15th. The more laps I do, the better I progress so I’m staying positive and I know I’ll get back to where I was at the beginning of the season.

Marcus Pereira de Freitas
HRC General Manager – MXGP
Difficult day for the team today as it seemed like the little things went against us. We know how important the starts are here and we weren’t able to get out of the gate well enough to challenge for the wins. Being down the field means there is more chance for riders to make mistakes as they try to come through and unfortunately after Tim’s crash, his bike was a little too bent up in order to be able to continue safely. He did bounce back for race two but we know there is more to come and we’re hopeful that he can show that when we return here on Sunday.
For Mitch, it was great to see him get a good start in race two. We got a chance to see his real speed and potential and it was as good as anyone else in the class. Now, we need to get him in the shape to be able to do that all moto long as his shoulder injury really hindered his fitness training these past few months. We’re confident it won’t take long though and he’ll be up front for the whole motos soon enough.