Gajser on getting back to winning ways 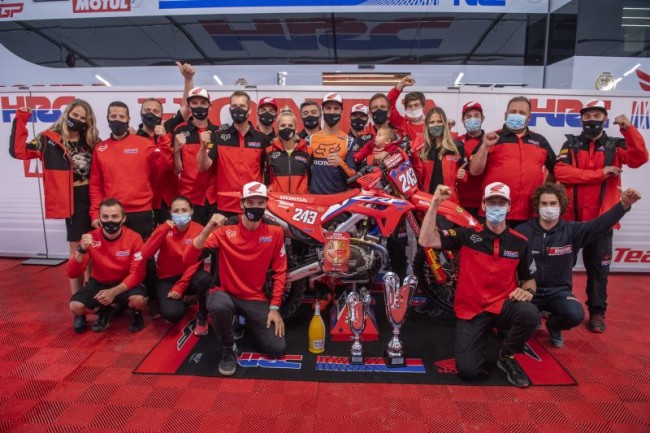 Team HRC’s Tim Gajser put in his best result of what is already a championship-leading season as he swept to one-two races results to take the MXGP of Europe overall.

Held for the third event in succession at the Mantova sand-track, the Slovenian rider got out of the gate well in both races and made passes when he needed to, in order to not only get the win, but also extend his red-plate margin to over 10 points. Teammate Mitch Evans also put in his joint-best results of the year to go four-eight for fifth overall and move to within striking distance of the top 10 in this competitive MXGP class.

For Gajser, it was a culmination of a lot of hard work to step onto the top of the podium and it was nothing more than the Honda CRF450RW rider deserved after his seven race wins in the ten rounds before today. He then added to that total in another display of speed and control on the fast-paced Mantova circuit. The Honda rider then came very close to making it a convincing one-one performance, finishing just a couple of seconds behind the leader after a small mistake mid-race caused him to lose a position. Now, with seven rounds still to race, Gajser sits 11 points ahead in the 2020 MXGP world championship and filled with confidence after he was able to get this overall victory.

Mitch Evans also heads to the next round in Spain with renewed belief that he can battle at the front of the field, after battling hard to a fourth place in the first moto. It is the third time that he’s finished fourth this year and it is further confirmation that the Australian in his rookie year can challenge for podium spots. An eighth in race two wasn’t quite what he was after but it still meant an overall finish of fifth, which was what he achieved at the first round of the series in Great Britain, back in March.

Now Team HRC head to the Spanish capital of Madrid for what is a new venue near the intu Xanadú-Arroyomolinos shopping complex. While no riders have ridden there yet, it is believed to be hard-pack terrain which should suit the Honda duo, who have just a few days to get ready for the racing on Sunday 11th October.

Tim Gajser 243
It’s an amazing feeling to be back on the top step of the podium. I’ve won many motos this year but never an overall, so I’m super happy to have been able to have done that at this round in Mantova. The races were nice, although I did get a little arm-pump towards the end of the first race which made it a little closer than I’d have liked but I still won, so that was good. Then in the second race I had another good start, and passed for the lead almost immediately. Unfortunately, I fell in the middle of the race and dropped back to second. I pushed hard to get the lead back but ended up second for first overall. A big thanks to everyone at Team HRC who have supported me this year and who have kept pushing me towards this goal. Next up is Spain and I can’t wait!

Mitch Evans 43
Today was a good day and a bit of a disappointing day too. In the first moto I got a good start, made a few passes and was in third for most of the race. I ended up fourth but it was still a good moto and I enjoyed running with the top guys. In moto two I didn’t get the best jump which made things difficult because it was still hard to pass, but I got back to eighth for fifth overall. This was the same as in Matterley Basin at the first GP of the year, so I’m pleased with that. I did really want that podium today but it didn’t quite happen but there are still seven more rounds to get it done and that’s what I’m focusing on when we head to Spain.

Marcus Pereira de Freitas
HRC General Manager – MXGP
It was a really good day for Team HRC, especially in the first moto when Tim and Mitch were running in first and third for a long period of time. Tim added to his race win tally but we knew that the second moto was crucial and thankfully, Tim once again showed his speed to get a second place to go one-two for first overall. He is now over 10 points ahead in the championship and it is another confidence booster for everyone in the team. It was also a good performance for Mitch to go four-eight for fifth overall. He showed he had the speed to run up front and he matched his best overall of the season so it is a good sign as we head to Spain.