Gajser and Prado win the French MXGP but it’s disaster for Cairoli! 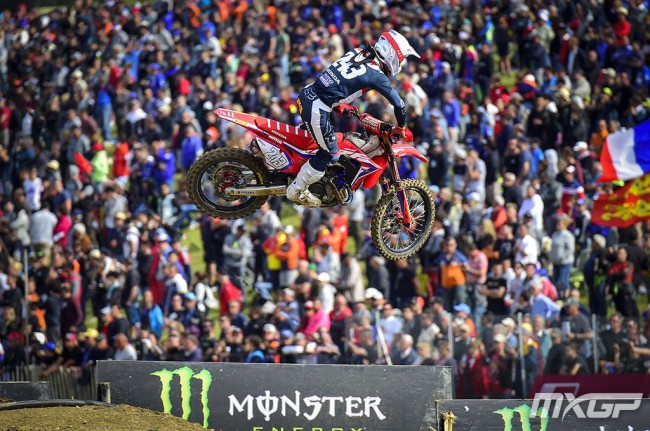 Tim Gajser won both motos in dominating fashion as Tony Cairoli had a nightmare second moto to bring the championship title all to play for again!

Gajser won race one passing Cairoli then Tonus to control the race with Cairoli taking second and doing enough to hold off Tonus in the dying laps.

But it was race two that had all the drama!

Cairoli unbelievably hit the gate at the start of the second moto and took off from last position, he then put in a blistering first lap to get up to 16th, but then while up to 14th the Italian hit the deck and had to come from 24th!

Amazingly, once the championship leader had got back into the points he then stalled the machine and ultimately ended up back in 17th and just four points!

Gajser meanwhile started just outside the top five and made two quick moves into third to stay with race leader and home hero Romain Febvre and Arnaud Tonus.

Febvre had the crowd cheering loudly for the first fifteen minutes as he led the world in only his second race back but Gajser started picking up the pace passing Tonus, and then made the move on Febvre.

The HRC Honda man looked in complete control, like Cairoli does at Lommel, as he calmly moved into the lead and pulled away for a glorious double win and is now only ten points behind Cairoli in the championship with another hard pack track next in Russia!

“I’m so happy, the weekend couldn’t go better, I was enjoying so much the track, I was having so much fun,” said an ecstatic Gajser.

Febvre stayed second to take a fantastic third overall with Tonus third in race two and second overall for his second podium visit in a row!

In MX2 Jago Geerts came oh-so-close to his first ever GP win but Jorge Prado’s starts just gave him the edge despite the young Belgian being the fastest rider on track in both motos!

Geerts rode fantastic in race one to run down holeshot man Prado from fifth and then put the pass on the Spaniard with three laps to go! Prado tried to come back but Geerts held strong to take his first ever GP moto win as the two speedy teenagers put thirty seconds on Thomas Kjer Olsen in third!

Race two and Prado holeshot once more and Geerts again started around fifth. The Belgian had to work his way around Sterry and then a stubborn Ben Watson who had his first good start in a couple of months and was riding strong in second, five seconds off Prado.

But Geerts eventually made the move and with ten minutes left the Belgian started to run down Prado again. He got the gap to under three seconds as the pair left Watson and Mitch Evans behind as they stepped up the intensity going for the overall win.

Then, with four laps to go and charging, Geerts tucked the front end and went down handing the win to Prado. Geerts valiantly remounted in second and reeled Prado in from nine seconds back to three again but he just ran out of time as the cool Spaniard took the overall win.

Watson finished third in race two to finally show his form again with Evans a strong fourth and Thomas Kjer Olsen another brilliant ride from the middle of the pack up into the fifth, and third on the podium but again his starts let him down, “ it’s becoming a big problem for me,” admitted the Dane who is now 14 points behind Prado in the world championship.