Gajser and Prado win in Latvia but Cairoli and Herlings get injured! 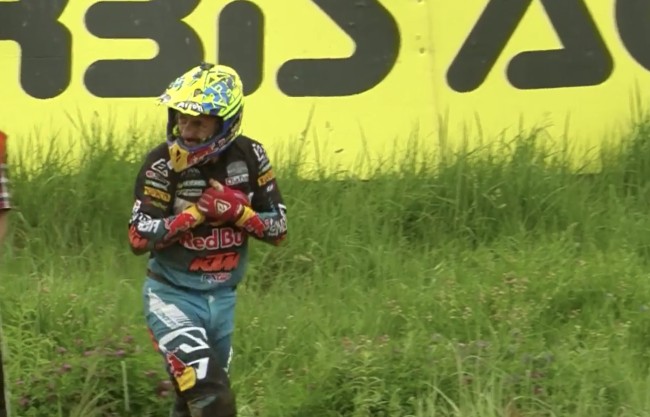 Tim Gajser went 6-1 to win the Latvian MXGP edging the win on the best second moto ahead of Romain Febvre and Arnaud Tonus who all had 40 points!

Jeffrey Herlings has won race one despite riding with a broken ankle sustained when he crashed on the warm-up lap and got his foot ran over by Arminas Jasikonis. Herlings went to get the painful ankle looked at and upon X-Ray went straight to the airport and didn’t race the second moto.

That left Arnaud Tonus, who led most of race one until Herlings went by with just a couple of lap to go, as favourite for the overall but the Swiss man couldn’t quite find the same rhythm and despite lying second at the beginning ultimately finished fourth for third overall.

Romain Febvre snatched second overall and put his teammate Seewer off the podium with an aggressive move, jumping across the front of Seewer in the waves on the final lap as Seewer was trying to get a run on Gajser for the win in what was a very intense end to the moto!

But the big news was Cairoli. The Red Bull KTM rider took third in race one despite feeling unwell to take five points out of Gajser’s lead but it all went wrong in race two. Cairoli was in fourth on lap one when he hit a kicker on a jump and got thrown violently from his machine and hit the deck hard. Cairoli did get up but walked straight off the track holding his wrist and would take no further part in the race.

It means Gajser now has a 33 point lead on Cairoli but it is unknown if the Italian will be able to race next weekend in Germany.

Gajser said: “Today I was a bit sore (after a big crash on Saturday) the first moto I was struggling and didn’t find my rhythm. The second one I had an even better start, pass the guys as quick as possible and ride my race. I didn’t know I had won the overall.

Thanks to a track frustratingly smoothed before both of their motos, the MX2 races didn’t provide too much excitement with all the riders just pinning it to win it for most of both motos as the circuit lost all its technicality.

Jorge Prado holeshot both motos with Olsen in second but the Dane couldn’t make the pass he needed too as Prado stretched the lead both times. Olsen, in both motos, would eventually lose second to Jago Geerts who came through from two starts around fifth or sixth up to second each time out for second overall, but these smooth tracks are doing riders like Geerts, who thrive on navigating difficult tracks and finding good lines to show their skills and fitness.

Ben Watson rode well but didn’t quite have the pace of the top three and took fourth overall with Bas Vaessen taking an excellent fifth overall.