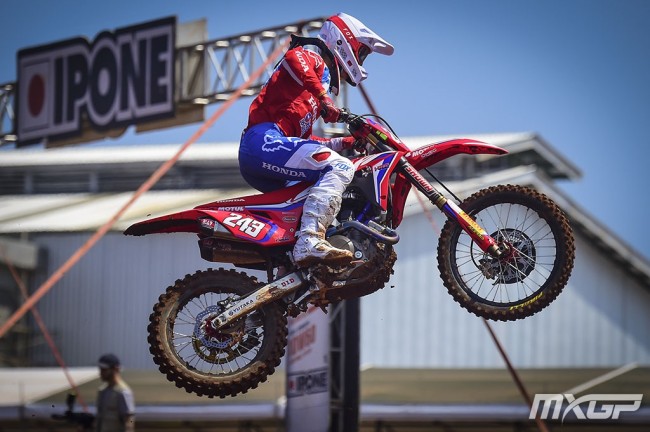 Tim Gajser eased to victory in both motos at a slick Semarang to win his seventh GP in a row the equalling Honda’s consecutive win record from back in 1997 but then it was Everts, Demaria and Beirer who did seven in a row not one rider!

Gajser got a bit of a helping hand in race one when Febvre crashed out of fourth, then Jonass crashed spectacularly out of second before Seewer did likewise with only a few laps to go! Seewer was able to remount and get third with Tonus second but Febvre suffered a DNF after bent bars and Jonass remounted right at the back.

In race two the battle for second behind Gajser was fierce in the closing laps with Seewer ultimately losing out to Jonass then Tonus, but it was still good enough for third overall for the factory Yamaha man.

Tonus put serious heat on Jonass in the last couple of laps for second but couldn’t quite find a way by, but it was still secured second overall.

Jonass should really have been on the podium, he rode great all day but that crash in race one cost him a spot on the box, however he showed he is really feeling the flow on the 450 now.

“Unbelievable,” said a delighted Gajser on another win. “I’m so happy, I was enjoying the second moto so much, the track was brutal, sketchy and slippery in places. I had a big crash in practice and hurt my ankle but I was 100% for the races.”

Jorge Prado controlled both motos with expert precision on a slick but flowing Semarang circuit.

Thomas Kjer Olsen passed Prado a couple of turns in one race one but Prado simply followed him for a couple of lap before outsmarting the Dane to make the pass as Olsen blocked the wrong line, thinking more about Prado than his own forward momentum.

From there Prado edged away and it was a similar story in race two. Prado got the lead again but was challenged early by Tom Vialle, unlike last week, Prado didn’t get rattled and countered straight away to retake the lead and regain control of the race.

Behind him Jacobo got into second and mounted a charge before he seemed to lose his rhythm and drop back to seventh. Vialle was back in second again but the heat seemed to get to the young Frenchman as Calvin Vlaanderen and Maxime Renaux made it a three way battle for second, with Renaux passing both Vialle then Vlaanderen to take the best moto result of his career with a fantastic second.

Vlaanderen’s third got him third overall on the podium, his first of the year in an impressive return to racing with Vialle’s 2-4 still good enough for second behind the dominant Prado.

Thomas Kjer Olsen had a huge crash in the first corner and collected Bas Vaessen meaning both riders couldn’t continue but thankfully they both walked away. However, Olsen is now a huge 78 points down on Prado in the world championship.

A pleased Prado commented: “It’s a good feeling to come to Indonesia and win both races. I felt very good. The track was way better today, I enjoyed it. I pulled away in the beginning and put it in cruise control.”