Gajser and Honda happy in Qatar! 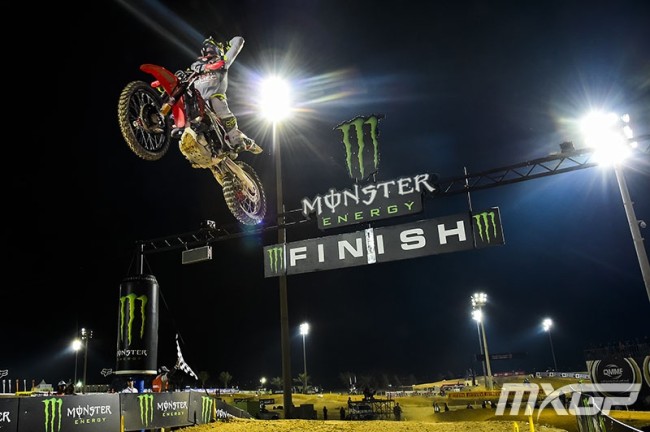 Evgeny Bobryshev started his 2016 MXGP campaign in fine form under the floodlights of the Losail track in Qatar, finishing second and third in the two races to take third overall in the Grand Prix classification.

Bobby’s ridden strongly throughout these last two days of racing, winning yesterday’s qualifying heat and taking the holeshot in race one aboard the CRF450RW. Only a small crash in race two prevented what would have otherwise been a pair of second places, but nevertheless the Russian lies third in the World Championship standings, tied on points with Romain Febvre in second.

In the second race, it was a Honda 1-2-3 from the start as Gautier Paulin took the holeshot, followed by Bobby and Honda Gariboldi’s Tim Gajser, also on the works CRF450RW.

Whilst the race continued strongly for Bobby and Gajser, Paulin was not so lucky as he was forced to retire whilst running third.

Gajser took the overall victory on his debut in the MXGP class to put two Hondas on the first podium of the 2016 season.

“We did a good job today and I’m really happy to start the season like this on the podium. The first race was pretty easy for me in second, but in the second race I had a small crash when I hit a stone that I didn’t see, but I came back to third place which I’m happy with. It’s a long season and this is just the first race but I’m happy with this weekend and feeling good. We’ve worked hard with Honda and HRC to put a good bike together over the winter so big thanks to the team that we’re starting this season in this way. I’d also like to say big congratulations to Tim for his win today – he rode really well.”

“In the second race my bike stopped today. It shouldn’t happen, but this is now part of my 2016 season. But I never give up. I remember all my training and everything I did and all the work I put in over winter, and I never give up. It’s like this. I can do nothing, except look to the next race.”

“Actually I didn’t expect this before this weekend! I expected to do well, but not to get my first 1-1 so I’m really happy about that. All weekend long I have been feeling so good here, and I was riding smart and with good lines and just felt comfortable, like I was riding in training. It’s the perfect way to start the season, and maybe a nice birthday present for my mother! I feel so well on the 450, and I’ve been feeling very relaxed and with no pressure before this weekend. I’ve been waiting all winter for this race, and it’s just amazing to start like this.”

“To start the championship like this is fantastic – it’s been a good weekend overall. The guys are riding well, especially Tim in his MXGP debut, and in the second race it was great to see Hondas in the top three with Gautier getting a great start. Unfortunately he then had the issue which forced him to retire, and which we’re looking into very carefully now to figure out what caused it. A lot of people questioned moving Tim up to the bigger class, but I think we’ve proved our point already today.”