Gajser and Bobryshev ready for MXDN! 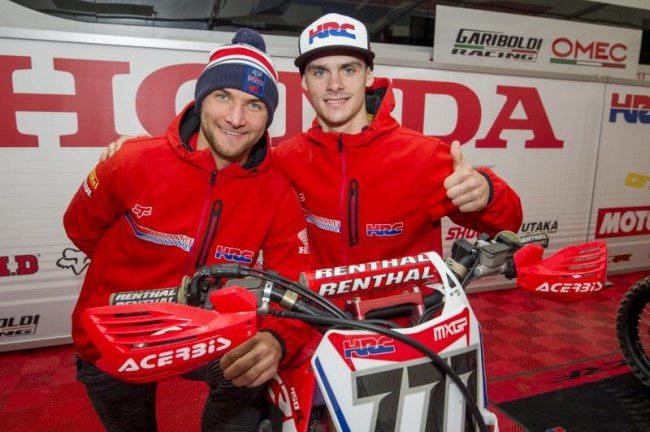 Tim Gajser and Evgeny Bobryshev have been selected to represent their countries; Slovenia and Russia at the Motocross of Nations this weekend riding the CRF450RW.

With the hectic MXGP season winding down in France less than two weeks ago, the selected riders will be back behind the gates this weekend in Matterley Basin. The track was originally designed for the 2006 Motocross of Nations but has since become a staple of the MXGP calendar. One of the qualities which makes Matterley Basin a unique venue, is its panoramic views. You are able to view almost the whole circuit from anywhere around the circumference of the track.

The Motocross of Nations is an annual event that selects the best three riders from each participating country to compete for national pride. Action on track gets underway on Saturday 1st October for practice and qualifying. The racing gets underway on Sunday in three races pitting MXGP, MX2 and Open class riders against each other.

Tim Gajser 243
I am excited to have been selected to represent Slovenia and to be racing at a track as good as Matterley Basin, in the nations this year. I love the track there, I know there have been a couple of changes there so hopefully it hasn’t changed the layout too much. The nations is always a really fun event and the atmosphere is totally different to a GP, so it should be an enjoyable weekend.

Evgeny Bobryshev 777
The nations is always a special event to be involved with as you are racing in a team of three people, for your country. It is also strange as although the pressure is off for the championship, you are racing for your country, so it is a different pressure. I feel honoured to have been asked to represent Russia again this year. The track at Matterley is really good for fans to view all of the racing. So, the atmosphere as it always is at the nations, will be on another level.

Roger Harvey
HRC General Manager – MXGP
With both Tim and Bobby being selected to represent their countries, we are pleased they are both heading into this fit and well. The nations is unique as it is more of a ‘team’ event than a solo rider event, so it is down to the strength of the three riders selected, as to how well their countries do over the weekend. It is a fantastic event though and having it back in the U.K. this year, at a track as good as Matterley, is exciting for the local and Worldwide fans.