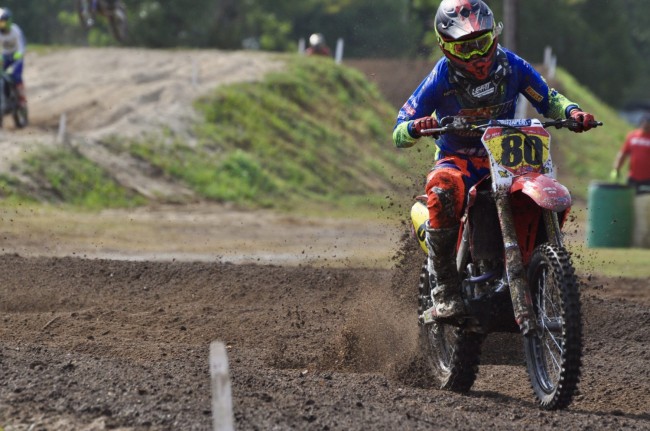 The Rocky Mountain ATV/MC AMA Amateur National Motocross Championship at Loretta Lynn officially started today with the free practice. A total of 35 motos made the day really busy, starting from the first moto at 7:30 a.m. and finishing at 5:00 p.m.

Andrea had a really tough first day, having a hard time in getting the right confidence with the bike and with such a difficult and tricky circuit. In the first moto of the Schoolboy 2 Andrea did the sixth time, while in the 250B he finished with a fifth place.

The Loretta Lynn’s track made the game hard for every single rider, specially for the fact that due to the soft mud the track kept on changing and getting slowly more and more difficult.

Andrea after the second session said:

“Today was difficult for me to find the right setting and feeling on the bike but thanks to the great team on my back I slowly started to feel better lap after lap. In anyway even if today I was not even close to do my best, the results don’t lie. Some riders were much faster than me and this motivates me to change mentality and give my best starting from tomorrow.“

After the long day of free practice the opening ceremony gave an official start to the week of racing. During the ceremony Davey Coombs, the promoter of the race, wanted to remember to everyone that the Loretta Lynn is  not just a race but it is first of all a week of Vacation for families and motocross passionate from all over the world. This is underlined by the fact that over more than the 1500 athletes that passed the qualifying rounds only 6 riders did not showed up at the registration on Sunday morning!!

For all the ones that wants to watch Andrea in live during the races it’s possible to follow him through the live broadcast on the webpage RacerTV.com, starting from Tuesday morning at  10 a.m. (GMT +6) and finish at 6:30p.m. (GMT +6).