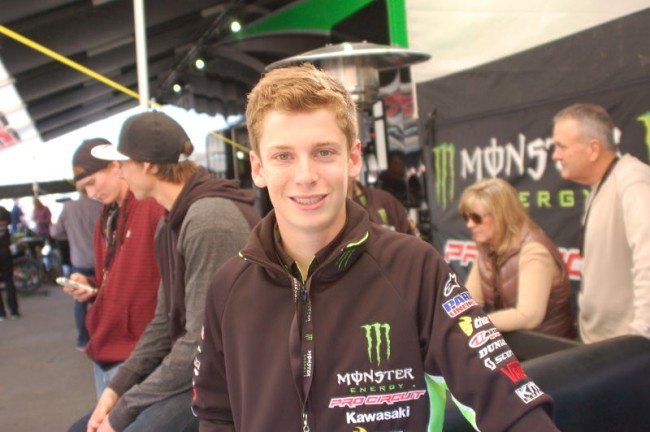 It is a big year for Adam Cianciarulo as he attempts to show everyone just why he had so much hype.

Injuries have hampered Cianciarulo’s attempts at being the next Ryan Villopoto but if truth be told, Adam has never shown that jaw -dropping raw race winning pace that Villopoto, Stewart, Roczen or Herlings showed when they broke through.

Now three years in, it’s time Adam got the results if he wants to justify the hype and his own belief that he is on the level of the very top tier, title-winning riders in the sport.

But there is an extra problem this season, and one he isn’t used too. Not only does he have to prove he beat his old rival Cooper Webb and defending champion Jeremy Martin, which will be no easy task, but he also has to show he can beat the rookie in his own team, Austin Forkner.

The PC youngster has been the top amateur for the next few years, and while not receiving quite the level of hype Cianciarulo himself got, big things are expected of Forkner.

Forkner recently said himself, in an interview with Transworld motocross, that he would like to be on the podium or top five in races this year. So the kid has confidence and at 17 the fearlessness of youth. If he can stay injury free expect him to be a force in some races, especially if he gets the starts.

Of all people, Cianciarulo will not want the next generation of highly touted amateurs literally speeding past him as he tries to deliver on his own hype from three years ago. He wants to win and he wants to show he can be a champion. It would be the ultimate confidence sapper, even for a rider as incredibly self-confident and ambitious as Cianciarulo.

In addition, Pro Circuit have Joey Savatgy who has already proven himself as a quality outdoor rider and a hard worker who won’t get tired in the heat of the summer.

Then there is the dark horse of the team, Arnaud Tonus. The Swiss is without doubt the most naturally talented of the quartet and if fit and confident could well be a title contender. But you have to question where his confidence is having barely raced in a year and a half.

It means that Mitch Payton has four top class riders but is waiting on them all to deliver the results he believes they are capable of and, he might have a bit of rivalry with the two youngsters, Forkner and Cianciarulo on his hands especially if Forkner comes out swinging at Hangtown!

It’s going to be exciting to see who comes out on top between Forkner and Cianciarulo and who is top dog in the PC team by the end of the nationals, nevermind the championship!