Forkner not happy with penalty decision! 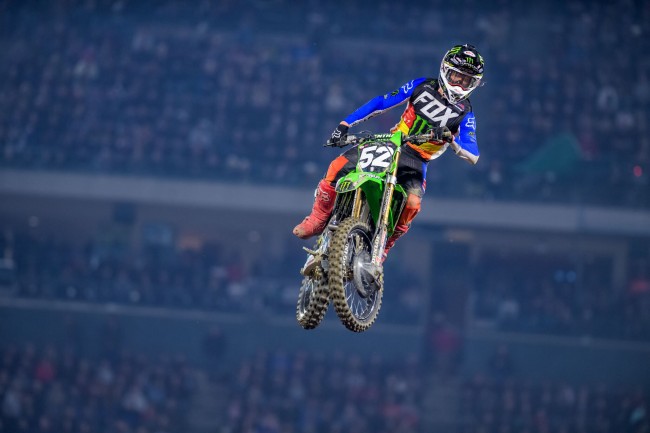 After two seasons competing on the east coast, Forkner made his return to Anaheim where he made his professional supercross debut. The rider from Missouri was ready to get back out on the track after taking the whole summer off to rehab a knee injury. With no main event gate drops since April 27, 2019, you wouldn’t have known it with Forkner nearly taking the holeshot in the main event.

He quickly made his move into the lead and kept the pressure from second at bay. With roughly five minutes left in the race, Forkner went into a Tuff Blox and was forced off his bike. He rejoined the race in third where he would finish, but was eventually docked two positions for cutting the track and finished the night in fifth.

“It was a split-second decision to be as safe as possible,” said Forkner. “That’s what they always tell us to rejoin safely and with me pointed backward and slightly left, I thought that after the next rider went by I would be fine. I didn’t gain any position by doing what I did. It’s a bummer they (the officials) didn’t feel the same way. After knowing I was able to put a good pace out front, I’m more fired up than ever to get back out there next weekend.”

McAdoo was making his team debut in Anaheim and was excited to start racing aboard his new Kawasaki KX250 machine. McAdoo didn’t get the start he wanted in the Main Event but raced into the top 10 after the first lap. By Lap 5 he was in sixth position, keeping pace to come across with a solid result in his first outing with the team.

“After so much preparation, it’s nice to finally get on the track and get a finish under my belt,” said McAdoo. “We took away a lot of good from this round that I’m hoping we can work on this week to go after an even better result. I would love to be challenging for the podium and proving to these guys that I am able to run up front.”