Fontanesi on her fifth world title! 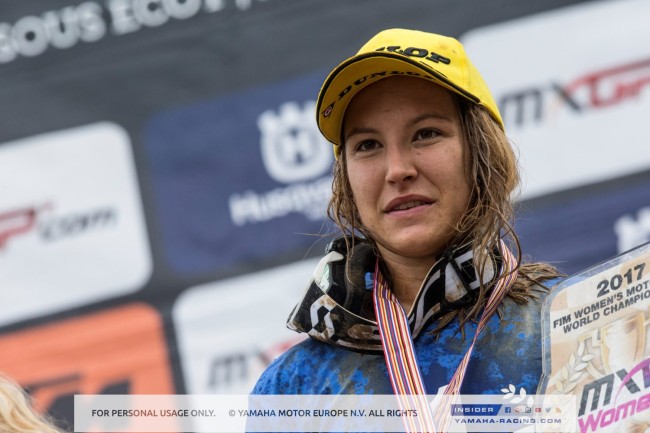 FontaMX Yamaha Official WMX’s Kiara Fontanesi has claimed her fifth FIM WMX World Title for Yamaha after a thrilling season that went down to the final race. Altherm Yamaha Official WMX’s Courtney Duncan finished third in the WMX Championship Standings, two points shy of the newly crowned champion, Fontanesi, after she bounced back from a devastating penultimate race with a massive win in Race 2.

A dramatic start to the sixth and final round of the FIM Women’s Motocross World Championship saw MXFonta Yamaha Official WMX’s Kiara Fontanesi take her second race win of the season out on the rain battered circuit of Villars-sous-Ecot. The skies opened up at the start of Race 1, saturating the steep clay hills and making them almost impossible to ride.  Fallen riders covered the circuit as Yamaha’s three title contenders Kiara Fontanesi, Courtney Duncan and Nancy van de Ven did their best to keep their YZ250F machines on two wheels.

Duncan and van de Ven were the early race leaders before both riders fell foul to the condition of the track. The duo made a strong comeback; Duncan in particular as she took the lead on lap six and charged away to the tune of 22 seconds.

Luck is usually a factor in treacherous conditions and on this occasion it dashed the title hopes of both Duncan and van de Ven. In the opening race, Duncan got cross-rutted on a daunting down-hill while battling for the lead. With the clay being extremely slippery she lost the front and fell. The New Zealander made a strong recovery where she eventually took the lead and pulled a 22 second lead on Fontanesi before reaching a section of the track that was completely blocked by fallen riders. The ‘Kiwi Girl’ did her best to swerve the chaos but was forced off the track and off-balance. She crashed on an incredibly slick hillside where despite her best efforts she struggled to pick up her bike. Once she finally got going again, she crossed the line in sixth place.

Van de Ven recovered from a small crash to finish in second place, 26 seconds adrift of the race winner Fontanesi, who claimed her second race win of the season.

After more overnight rain, some of the steepest sections of the track had been taken out although the majority of the circuit still remained a quagmire. After the devastation of Race 1, Duncan had a point to prove. She fronted the field right from gate drop and led every lap to win by a whopping 45 seconds.

Nancy van de Ven was sitting in a comfortable third place – with the world title in hand – for all but two laps. The young Dutch lady’s dreams of winning the FIM WMX World Championship were shattered when she fell and got stuck in a sticky mud hole.

With van de Ven desperately trying to escape the muddy mess she was in, Fontanesi inherited third place which catapulted her from fourth place in the WMX Championship Standings to first place where she managed to complete the final lap in third place. She posted a 1-3 result to win the Grand Prix of Pays de Montbèliard and her fifth FIM Women’s Motocross World Title by the narrowest of margins, a single point. Courtney Duncan’s 6-1 result landed her on the third step of the podium, which was also her place in the 2017 WMX World Championship Standings despite winning the most amount of races this season. Van de Ven was the third Yamaha inside the top-four.

The tightly contested 2017 FIM WMX World Championship will go down in history as one of the best, particularly for Yamaha with the brand going unbeaten in the manufacturer standings, to be crowned manufacturer of the year for the third consecutive time. In addition, Fontanesi’s incredible achievements have earned her a place in the history books as the most successful female motocross rider ever.

“It has been such an incredible day. I still haven’t realized what has happened. I am extremely happy to have won the title this year, it has been the toughest my career. There have been many ups and downs this season. It was always my dream to win the FIM Women’s Motocross World Championship, and my first one will always be the best but if I was to pick a second favourite, it would be this one. All of the best riders were here this year, and it was a hard fought victory.”

“I arrived here in Villars-sous-Ecot on Friday and walked the track. I really liked the look of this track, I was really feeling it. I went out in qualifying which is always my weakness, I am not so strong in the qualifying sessions and put in quite a good lap-time. I knew that this was going to be my weekend. I got off to a decent start in the first race and was leading by more than 20-seconds, but then my worst nightmare became a reality. I came around a corner and couldn’t see a line up the hill with riders all over the track. I can’t describe how devastating it is to lose the championship this way, but on a positive note, I regrouped for today and managed to get a decent win by more than 40-seconds. All we can do now is close the book on 2017 and look forward to the 2018 season.”

“My weekend started good. I was second in the first race and still led the championship heading into the second race. In the final race of the year, I had a small crash at the start of the race but I got back to third where I felt strong. I was still leading the championship but with two-laps to go, I fell on the uphill because there were many fallen riders. I got stuck there until the finish, and I lost everything out there.”