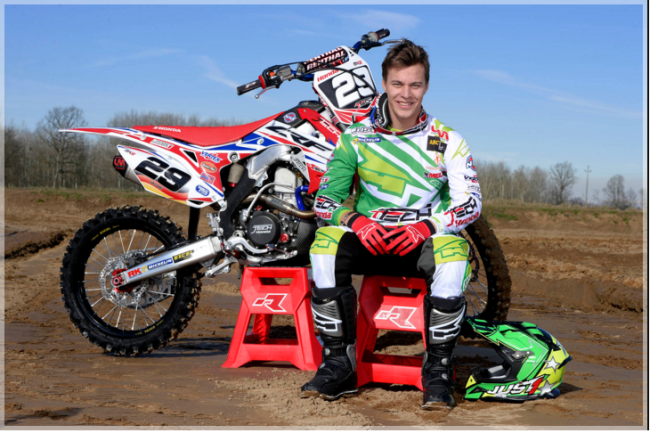 It’s crazy how big the impact of one title can be. But when Germany’s Henry Jacobi snatched the FIM 85cc Jr. World title at the tender age of 13

it was only confirmation of what people in the German scene already knew; this kid is something else. Now the talented Jacobi will enter his first full season in the MX2 World Championship with the ambitious Honda-Jtech squad.  The friendly Thuringer is looking forward to his best year yet!

Hyped, neglected and resurrected. Henry has yet to celebrate his 20th birthday but  already things have come full circle. Coming from the same region has Ken Roczen and following in his footsteps on K-Roc’s handed down bikes Henry too won all junior classes. He even equalled Roczen’s early succes until that 85cc world crown. “That was in 2010 and actually it came as a surprise,” Jacobi says. “I didn’t race the European championship that year, everyone was talking about how fast those guys were. But when I saw how it went in practice I knew I was in for a shot!” Unfortunately 2011 turned into a nightmare after breaking both feet and missing most of the season.

The following seasons Henry re-established himself in the EMX125 and EMX250 European championships. Rather than staying in the European Championship for 2015 he decided to jump to the world stage. “Many people believed I didn’t have the speed (yet) for GPs but I proved them wrong. At times I was able to show what I’m capable of. In my first MX2 Grand Prix in Trentino I crashed at the start together with Petrov. Still I managed to come back from way back to finish 14th. In Germany  I made it into the top 10 twice and in France I was lying 8th in both motos when I suffered a technical DNF. In Mantova I also grabbed the holeshot award.”

For the first time in his career Jacobi got acquintated with a different bike manufacturer over the winter on top of switching to a new team. “It seemed like this huge step at first because I have been with another brand since I was four. Actually I got used to the Honda CRF250R quite quickly. The amazing thing is how well and precise the bike handles. Especially the feeling at the front is incredible. This allows me to place the motorcycle wherever I want, the bike now does what I want. Before this was not always the case. It’s really sweet and gives a lot of confidence!” Off the bike the Axo rider has worked hard as well. After an intense physical training camp in Fuerteventura he’s now ready to do the i’s and cross the t’s with his preparation on the bike. “As a team we work really hard and everyone is very friendly. The guys do everything to give me the best possible bike so it’s great to receive that kind of support.”

With both his team mate Damon Graulus and himself locked in at Honda-Jtech for long-term deals, the common vision is clearly one of development.
“The belief in myself has always been one of my strong points. I feel 2016 could be a really crucual year. Last season I wanted to get a top-10 at least once. The next step is to get a top-5 at least once. That’s easier said that done because the difference in speed between me and those regular top-5 is still there but I want to improve gradually. I know it can be done and I’m never intimidated by anyone. I don’t care who it is I’m racing against. In 2014 I rode for team Germany in the MXoN. On the starting line I was standing between Eli Tomac and Tanel Leok on my 250 bike, still I smoked them in the start,” he remembers fondly. “Perhaps GPs suit me better than the European championship. If you don’t start in the top-5 it’s super hard to come back in EMX2. I know where I need to improve. My consistency hasn’t always been the best so that’s an important area. Look at Ryan Dungey, he’s not always the fastest but he’s always there.”

Translating his 2016 goals in clear-cut numbers can be tricky. “I want to step it up in terms of speed but to finish well overall you also have to stay healthy. You could be inside the top-15 all the time and be 10th by the end of the year, you never know.” Although he’s 100% focused on the bike the Honda-Jtech recruit is laidback when he’s not racing. “Five minutes before the start I could be making jokes and have a laugh! During a race weekend I don’t feel any kind of stress or pressure.” It’s the same carefree attitude that gained his youth friend Ken Roczen a huge following. Even after all those years Henry and the former world champ  have remained friends. “Yeah, Ken is cool. He doesn’t think of himself as a big star or anything like that. We keep in touch altough he’s obviously very busy. It’s nice that he didn’t forget where he came from!”

The same can be said for Henry Jacobi himself. You can count on Jtech’s number 29 rider to turn it up another notch when he rides in front of his home crowd in Teutschenthal. “The track is only one hour away from my house so it’s really special to race there, I like it. But I also love Matterley Basin, it’s a track like no other! Strangely enough I’m also quite good in the sand although we have none of that type of tracks where I come from. As I will be doing the overseas as well I can’t wait to discover tracks like Losail, Neuquen and Glen Helen!”