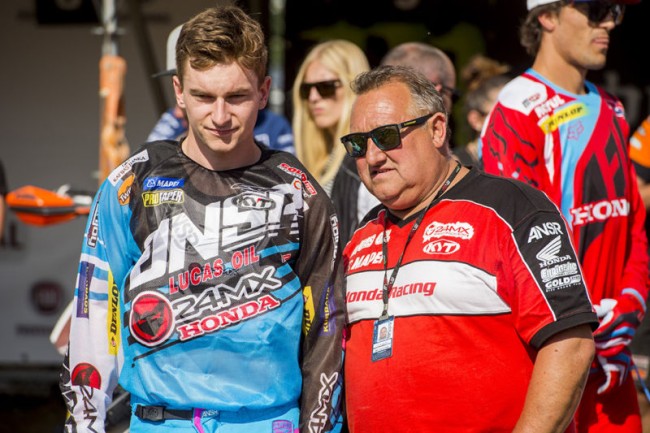 Making the switch from one team to the other mid-season is difficult. Joining the toughest motocross class in the world at the same time poses a huge challenge. MXGP rookie Damon Graulus is hitting his stride again after he picked up an unfortunate thumb injury at the GP of Great Britain. We sat down with the 21-year old Belgian ahead of the famous Keiheuvel sand race in Belgium and the final European MXGP in Assen where Graulus scored a double moto win in EMX250 last year.

How do you look back on your first five MXGP races?
Damon Graulus: “You mean 4 and a half? (smiles) I was knocked down at the start of the qualification race in Matterley Basin where I sustained a thumb injury that’s why I missed both motos on Sunday. It’s been a very exciting time and a great learning experience in MXGP though. From training on the CRF450R in winter time I already knew that the bike suited me. We’ve seen that I’m capable of running top-15 when I’m fit so that’s positive. But each and every session, every qualifying and every moto you’re a competing in what’s probably the deepest motocross field ever. You can be fighting for 12th or 13th with Gautier Paulin or Max Nagl, that’s crazy!”

Every detail counts you mean?
Graulus: “Yes, absolutely. I know I can match the speed of the guys between 10 and 15 but to do that consistenly you need a good start, you need to be in shape, stay focused to avoid mistakes and you need a competitive bike. All factors must be in place. Switzerland was pretty good because I felt I had the speed and I was making progress again. I’m working well with the 24MX Lucas Oil Honda team so that’s been definetely a big help to get me as a comfortable as possible with the class and with the bike. It’s also about continuously strive for small improvements. That’s one of Patriek Heydens’ (ed. Technical director of the team) strengths. Like in Frauenfeld we tweaked my seatfoam to make me more at ease in the start when you might have to respond quickly in the hustle and bustle.”

It took you some time to get back up to speed?
Damon Graulus: “After Matterley Basin I had no other choice than resting so I had to sit out Mantavo. My preparation for Loket was minimal. In the Czech Republic I suffered some inflammation to the thumb so before you know it one thing leads to another. You can not train properly in between GP’s while your competitors are getting stronger and faster. What could look like a pretty long time on the calendar suddenly boils down to very little riding in such a case. Right now I’m fit enough to do 30 minute motos because physically I’m fine. My conditional base is good and I like to train so that’s not an issue. Just to be able to push until the end you need the bike fitness as well. You can only reach that with racing!”

You’ve been riding together with your team mate Ken De Dycker this week, it must be a boost for the whole team to have him back!
Graulus: “It was overdue for a long time man! That’s unfortunately how it is with an injury like his (ed: femur fracture). All the time we’ve been doing quite a lot of physical training together but it’s for sure nice to ride together again. Of course he needs more race rhythm and time on the bike. But just when you saw his first laps again you can see that the hunger his still there, his speed was pretty good as well for such long lay-off. I’m looking forward to race Keiheuvel Motocross in Balen with him on Monday. It’s awesome to have Keeno back!”

Tell us something more about the Keiheuvel race and the track.
Graulus: “It’s a big tradition. Every year the race is organised on the 15th of August and it’s a very busy event with a huge crowd. The track is gnarly, it’s a tough and technical sand track. Compared to Lommel the sand is slower. Especially because it’s a good preparation for Assen the field will be strong too with Herlings, Simpson, Nagl, Strijbos and Jasikonis, Butron, Getteman, Paturel and Van Doninck… The Keiheuvel is the second round of the Belgian Championship and we have the third round of the Belgian Championship in Or-le-Grand next weekend. For family and friends it’s cool That I’m racing close to home. So I’m looking forward to doing both Balen and Orp-le-Grand. Orp is an interesting track as well. It’s unique and old school, some sections remind you of Namur. It’s a lot of fun… when it’s dry!”

You rode well in Assen last year too.
Graulus: “I have good memories of Assen last year, that’s true. I won both motos the EMX250 series. The facilities are nice and the crowd was really into so that was awesome. As a track it’s not my favourite but I know I can do well there. You need to be in your best shape ideally! It’s an artifical sand track which means that not only the ground is loose but you have bumps and ruts everywhere. Assen leaves you no time to rest, nothing is flat there. I’d like to end the season strong and we’re in a good place to do that.”

What do you think of the 2017 Honda CRF450R that was launched online today?
Graulus: “It looks like an amazing bike. Based on the features and specs it seems Honda has achieved a breakthrough in the 450 class. I’m looking forward to ride it!”