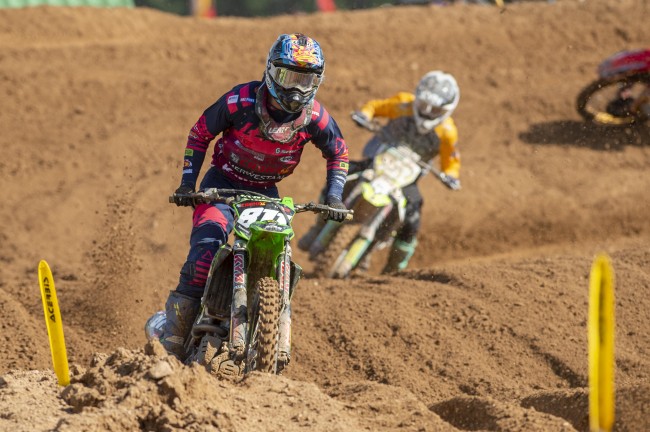 After winning the Russian round of the EMX250 series F&H Kawasaki rider, Roan van de Moosdijk went to Latvia, Kegums with a good feeling. The talented Dutch rider didn’t disappoint either has he won round five of the series. After the win he’s cut the points deficient down from 21 points to 7 – the EMX250 championship battle is hotting up. Both Adam Sterry and Henry Jacobi both showed the speed they have to offer in Latvia but results didn’t go all their own way.

When the gate dropped for the first moto, Sterry got a great start – something that hasn’t happened too much this season. The Brit was sitting in third and battling with EMX250 champ, Boisrame. However, Sterry made a mistake and then collided with the French rider as a result. It left Sterry down on the deck and a lot of work to do. It took him a long time to re-start his F&H Kawasaki machine and by the time he did he was way back. The riding was good though and he was able to carve his way through the pack to fifteenth, a good ride under the circumstances. As for German rider, Henry Jacobi, he was locked in a battle with Ben Watson for fourth but towards the end of the moto he had a bike problem which meant he couldn’t finish the race – disappointing considering he had fifth in the bag. There’s certainly nothing wrong with Jacobi’s speed.

Sterry was able to prove that his good start in the first moto wasn’t just a fluke as he got another good start in moto two. He was with the leading group sat in fourth and he was able to keep himself there for the first four laps. On lap five, Geerts found his way past Sterry but he was able to hold onto fifth, a great moto for the Brit who had good speed all weekend long, it’s just a shame about the first moto crash meant he couldn’t do better than ninth overall. Jacobi got a disastrous start in the first moto as he was outside the top twenty-five and had a lot of work to do. The aggressive German sat into the challenge and was passing riders left, right and centre. He couldn’t catch his teammate but he rode well through the field up to sixth.

It was the perfect weekend for Roan van de Moosdijk as the 18-year-old dominated both moto’s to go 1-1 and more importantly gain championship momentum. In the first moto, the Dutch rider got a good start in second and once he found his way into the lead opened up a thirteen seconds lead.
Another good start in the second moto was key for van de Moosdijk as he was sat in fourth, but it didn’t take him long to find his way to the front.

Jacobi: Still quite happy with my weekend got 4th in quali race and was battling for 4th in moto 1 as my bike got mechanical issues.  Second race I got a bad start and came from 26 with much fire to 6.

Sterry: Felt good all weekend just some bad luck first moto with another riders bike getting stuck in my back wheel making me come from really far behind. Good speed in all the sessions and solid 5th in the second moto, I’m excited to get back to work this week and improve for Germany.

Van de Moosdijk: Perfect weekend for me as i went fastest in free and time practise and got 2 good starts which made it a lot easier, i was not really happy about my riding in moto 1, did too many little mistakes but in moto 2 i rode a lot smoother and controlled the race. Happy to gain good points in the championship

Both the MX2 World Championship and the EMX250 championships continue next weekend in Germany at the Teutschenthal circuit – Jacobi will be in action in front of his home fans.