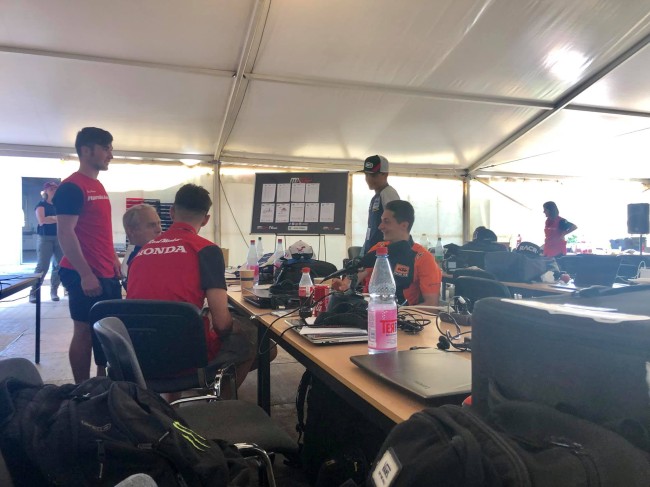 They say a picture can speak a thousand words and after the MXGP of Germany in the media room, some French riders and FFM (Federation Française de Motocyclisme) coach, Pascal Finot all shared a joke and a laugh together.

There’s one thing that’s pretty clear and it’s that the FFM clearly work hard with the younger riders to help them improve for the future.

The French riders and coaches clearly have a good relationship off the track too which is important for a good atmosphere.

It would be fair to say that the French have made some questionable selections in the past for the Motocross Des Nations, but can we really fault them for that? They have won the event for the last five years after all so their decisions have been well and truly justified.

During the MXGP of Germany in Teutschenthal even though a French rider never won an overall in the World Championship, you could say they dominated the event. There were five French riders on the podium over the four classes which is pretty impressive. French riders also won the EMX250 and EMX125 classes with Stephen Rubini and Tom Guyon respectively.

Watching the second MX2 moto with Mathys Boisrame and Tom Vialle running 2-3, you can see that the future for France looks to be in good hands.

When you add in the likes of Tom Guyon, Maxime Renaux, Brian Moreau and there’s many others then things are looking good.

The FFM clearly care about the young riders, it’s no coincidence they’ve won the Motocross Des Nations for five years in a row with riders they have helped nature from a young age, it’s a winning formula.

It would be nice to see other federations follow FFM’s example and step up their game in order to help the younger riders make it in what is a very tough sport.

As for the French Des Nations hopes in 2019, it will be hard for them to retain their title for a sixth year in a row. It looks like Gautier Paulin and Romain Febvre picks are guaranteed but the MX2 selection will be a tough one!

Will they look to the AMA paddock and select Dylan Ferrandis? In MX2, they have Tom Vialle, Mathys Boisrame and Maxime Renaux all riding well. It’s going to be a difficult selection but they’ve got it right in the past so they will probably make the right call.