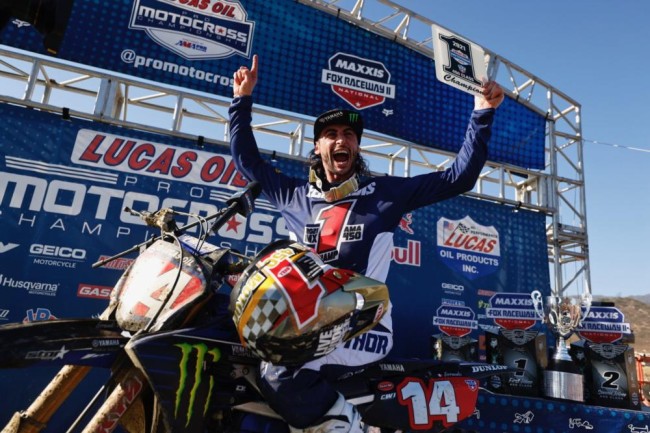 Ninety-eight days after scoring a moto win in his premier class debut, Monster Energy Star Yamaha Racing’s Dylan Ferrandis returned to Fox Raceway and clinched the 2021 Lucas Oil Pro Motocross 450MX Championship. The Frenchman secured the title in punishing triple-digit conditions with a 1-2 result for a second overall finish at today’s penultimate round in Pala, California. His teammate Christian Craig put in a solid ride to score a top-five finish with a 5-4 tally.

Ferrandis fired the first shot and took the fastest qualifier honors in the final moments of the second qualifying session. In the first moto, he got a good start in third and stayed with the lead group. He made his move to second on Lap 5 and started chasing down the leader. He put in some fast times to cut the gap in half and then passed his rival on the inside a couple of laps later. From there, Ferrandis built a comfortable lead to secure his seventh moto win of the season.

In the second moto, Ferrandis narrowly missed the holeshot, and although he was shuffled to third early, he kept the leaders in sight. It was a thrilling battle on that opening lap, and the red-plate holder wasted no time to pass both riders and claim the lead. He started to build a gap but had a moment four laps into the race and ultimately was shuffled to second. Ferrandis managed his race to finish comfortably in the runner-up spot to secure second overall and, more importantly, the title.

It was an emotional championship victory for both Ferrandis and the team who made their debut in the premier class this season. It has been a landmark year for the rookie who earned five overall victories and has finished on the overall podium at every round thus far. The 2020 250MX Champion has also added his name to the record books by being the first Frenchman to secure the 250 championship and the first to win the premier class title in 30 years.

Craig had a solid race back after missing the previous round due to his crash at Budds Creek. He had two good starts in the top five and battled the challenging conditions to score a 5-4 result for another fifth overall finish. Still not feeling 100% from his big get-off at Unadilla, Aaron Plessinger sat out of the Fox Raceway National II to work on returning to full fitness for next weekend’s season finale at Hangtown.

The Monster Energy Star Yamaha Racing team heads north to Rancho Cordova, California, for the final round of the 2021 Lucas Oil Pro Motocross Championship at the Hangtown National on September 11.

Dylan Ferrandis: It was another tough day, and I had to dig really deep to get this result. The weather was really hard on us, hard on the body, but I had this championship in mind, and I really wanted it. I tried the best that I could, and it looked like it was enough to grab it. It’s just unreal to be the champion in my first year on the 450. When I was young, I dreamed of being a 250 champion, but I never really dreamed of being a 450 champion. So, it’s not even a dream come true; it’s more than that. It’s just the best thing that I have ever done in my life. Today I’m really out of emotions. It was just such an awesome year for me, and it’s so awesome to win with this Yamaha bike and with this team. I’m really happy for everybody involved in winning this championship.”

Jeremy Coker (team manager): “Today was a day I’ll never forget in my life. Even though I’ve been involved in a lot of championships on the 250 side as an engine builder and crew chief, this is really special. To do this as the team manager on this team and to orchestrate things from this side; it brings tears to my eyes. The crew was incredible! There was not one person on this team that didn’t have the same goal, and we all worked hard to achieve it. It’s something none of us will ever forget. I’m proud of what Dylan did today. He rode amazing. It was a really tough day and very hot outside, but he pulled off the championship a weekend early. As for Christian, we didn’t even know if he’d be able to race, and he came out here and did what he did; it was just an awesome ride. We’ve still got one more to go, and we’ll be out there to win at Hangtown.”