Ferrandis on Craig A2 incident: It was not my intention 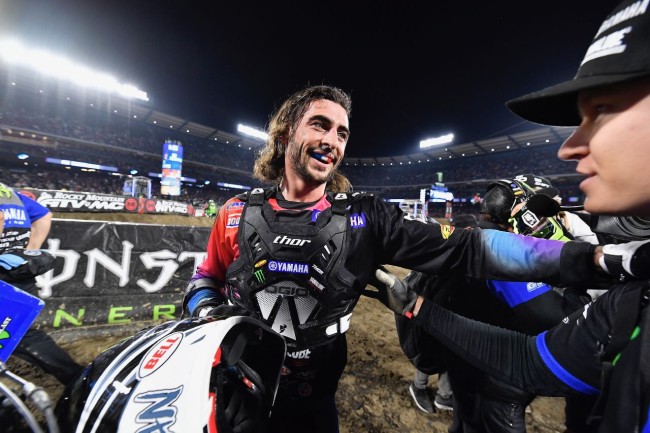 Defending Monster Energy AMA Supercross 250SX West Champion Dylan Ferrandis scored his first win of 2020 on Saturday night, in a wild Anaheim 2 Main Event. His teammate Justin Cooper ran a smart race in challenging conditions to join him on the podium to expand his points lead and bring another 1-2 finish at the Angel Stadium of Anaheim for the Monster Energy Star Yamaha Racing team.

Both Ferrandis and Cooper got off to a bad start in their respective Heat races and had to battle their way back to finish third. In the Main Event, they both got a better start but found themselves battling for sixth. The Frenchman, however, was able to quickly gain a couple positions and make his way into the final podium spot by lap three. The 2019 champ put his head down to close the gap on second. Around the halfway mark, he made his move after crossing the start finish line and came together with a competitor vying for the same position.  Both riders went down

but Ferrandis quickly rejoined and was able to hold onto that second position
while his teammate advanced to fourth.

The tough technical track continued to catch riders out. Cooper’s championship rival crashed out of third not long after. Then the race leader also crashed, allowing Ferrandis to close the gap and have another shot at fighting for the lead. He put his head down and made his move on the inside of the right hander before the whoops to take the lead on the last lap. His competition tried to retake the lead on the final run to the finish, but in the heat of the battle crashed. Ferrandis went on to take the win and Cooper crossed the line second to expand his points lead to 12 points.

Next up is Round 4 of the Monster Energy AMA Supercross Championship at the State Farm Stadium in Glendale, Arizona on Saturday, January 25.

Wil Hahn
Monster Energy Star Yamaha Racing Team Manager
Tonight was one of the craziest races I’ve ever witnessed! To score another 1-2 finish here in Anaheim is great, especially on a tough, technical track like today’s. The team worked hard today. We’ll keep working hard and keep our momentum rolling into Glendale.

Dylan Ferrandis
Monster Energy Star Yamaha Racing
I’m really happy to get this first win, especially after some struggling in the first two races. We had some issues with the start and we figured it out this week with the team and made some good improvements there. I got caught up with some riders at the start (of the Main) but was able to move forward. The race was going good and then the moment with Christian (Craig)… Obviously
it was not my intention for us both to crash, but it was just a racing incident.

We had one of the most technical tracks that we’ve ever had. I did like the track. I felt really good all day, but there were a lot of things going on in the Main. A lot of riders crashed. I’m glad to get this win and we will keep working during the week to prepare for next weekend.

Justin Cooper
Monster Energy Star Yamaha Racing
It was just a tough day all day, but we were able to come through when the time was right and land on the podium again. We got some good points. The track was definitely tough tonight; it was pretty tricky. It was hard to find a flow out there, but I did the best I could. Knocked off some consistent laps, rode smart and ended up with a good result.