Ferrandis: Maybe I’m not used to riding at the front that soon 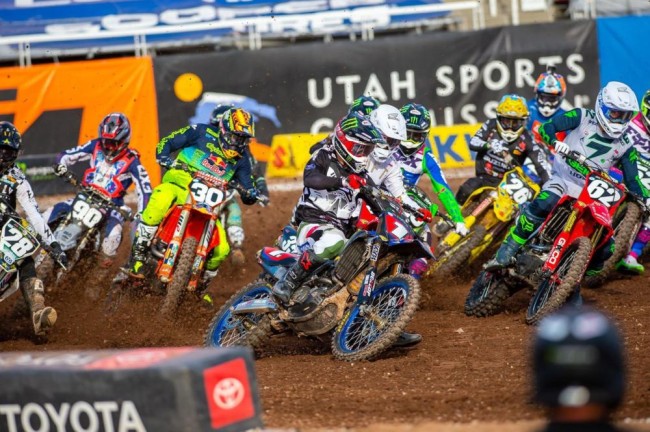 Dylan Ferrandis took the holeshot for only the second time during his Supercross career at the weekend. The French rider’s weakness is clearly his starts as he’s used to having to play catch up from behind. However, at SLC5 he got the holeshot but Forkner found his way around Ferrandis to take the win. The Star Yamaha man says he’s maybe not used to riding at the front that soon and needs to protect the inside more.

“I knew were Austin was. I made a small mistake not jumping a rhythm when I saw a yellow flag and it cost me a few seconds and he broke the gap and was able to attack me the next lap. It was a big mistake from me. I feel that I’m better than before but just on race day, the first one (SLC1) was tough. I struggled physically with the bike with the setting but this round I was feeling awesome. I crashed in the heat but in the main I don’t know, maybe I’m not used to riding at the front that soon. I don’t know what happened, I missed one rhythm section and I think it cost me a lot. It’s okay because after Austin passed me I was feeling great, came back and came back strong. At the end of the race I wasn’t tired at the end of the race so I feel good but maybe now I need to protect more the inside”, Ferrandis stated at the press conference.

At the end of the race, Ferrandis didn’t look happy and it was down to frustration – he didn’t like getting beat the way he did and had no excuses.

“It was frustration. It’s been a long time I’ve been beat like that so easy so I was really mad with myself. I was frustrated because it’s not normal to have the red plate and number one and get beat like that so I was mad at myself. I was also thinking about what to say on the podium – obviously no excuse, I wanted to stay professional. I was so mad so I just took some time to breath, I lost the race but I still have seven point lead so it’s fine but I was still mad”.

With the final round being the final showdown and containing riders from both the West and East Cost, Ferrandis is expecting Shane McElrath and Chase Sexton to be right at the front.

“We will have more good riders, also in the East Coast, I feel like a lot of riders are injured now – it’s Shane and Chase that are on top. I feel like they can match our speed but after those two there’s a gap. For sure it’s going to be crazy because we have our championships and they have their championships so it is going to be a crazy showdown for sure”, Ferrandis concluded.