Ferrandis: I feel like the bad starts cost me the win 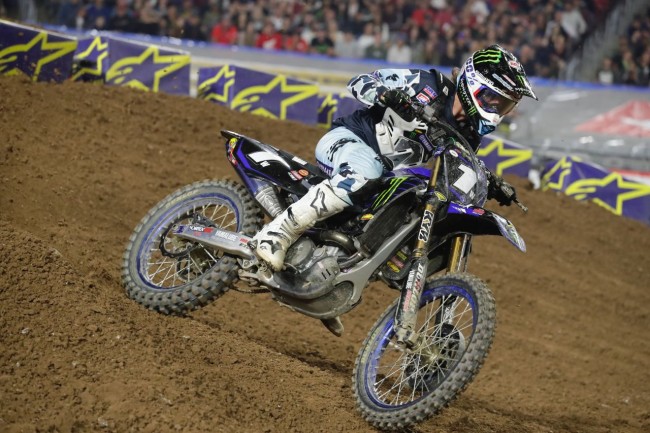 Dylan Ferrandis scored three second-place finishes to end the night second overall at the first Monster Energy AMA Supercross Triple Crown of the season on Saturday night at the State Farm Stadium in Glendale, Arizona. His Monster Energy Star Yamaha Racing teammate Justin Cooper recovered from crashes in the first two Main Events and took the win in the final race to finish ninth overall and hold on to his points lead.

Ferrandis got the day off to a good start, taking the top spot in qualifying for the fourth week in a row. However, in the first Main Event, he was unable to capitalize on that top gate pick. The Frenchman quickly worked his way up to third from fifth and started to close the gap to second. On lap eight, he made his move for second. His competitor tried to counter shortly after, but Ferrandis was able to regain the position and hold onto it to the finish.

In the second Main, starts continued to be an issue for Ferrandis. He found himself back in ninth and once again, he had to charge through the pack and battle for a podium position. The reigning champ showed strength in the challenging whoops section and made the pass for third. He kept pushing and was able to catch up to second and this time make the pass after the sand section. Unfortunately, there was not enough time left to catch up to the race leader, but he had a solid second-place position in the overall going into the final Main Event of the Triple Crown.

Ferrandis’ start in race three was better than his first two, but he still had some work to do back in fifth. Once again, he advanced his position in the whoops and then soon after took third. A couple of laps later he moved into second and held onto it until the finish, ending the night second overall to make the trip to the podium for the fourth time this season. Although not the win he was hoping for, Ferrandis was able to close the championship gap to just three points behind his teammate.

It was a difficult first Main Event for Cooper. Like his teammate, he didn’t get a great start and then crashed after the sand section on the first lap. The series points leader lost valuable time trying to get back in the race, but he didn’t give up and was able to work his way into 17th to salvage some valuable points in the Triple Crown. The New Yorker got off to a much better start in the second race and got into the lead early, but unfortunately it was more of the same. He crashed once again, this time in the righthander before the whoops. Cooper got back in the race and charged from the back to cross the line ninth.

He was able to redeem himself, though, in the final Main Event of the night. The series points leader got another great start, quickly took the lead and held onto it for the 10-minute-plus-one-lap race to end the night ninth overall. His efforts allowed him to hold onto the red plate and the top spot in the 250SX West Championship.

WIl Hahn
Monster Energy Star Yamaha Racing Team Manager
“It wasn’t the night we were hoping for, with Justin getting ninth overall, but I think we salvaged what we could out of it. Dylan rode really well and gained some points in the championship. Justin came around in the final Main and showed what he was capable of and was able to keep the points lead. It’s plain and simple – there are some things that we have to work on, but I think it was a positive night overall.

Dylan Ferrandis
Monster Energy Star Yamaha Racing
“I can’t say it was a bad day because it could’ve been much worse. I’m a little disappointed to miss the win. I feel like the bad starts cost me the win tonight, but the speed was there and I made a lot of passes. I was really stoked with my physical feeling because I was not tired at any point, my riding was really good and the bike was awesome. We just need to improve on the starts. I don’t understand why I’m struggling with the starts right now, but we are working with the team and have made some changes. Now we are three points from first place in the championship – that’s the big goal.

Justin Cooper
Monster Energy Star Yamaha Racing
“It was a roller coaster night in Glendale. The track conditions were really tricky and traction was very hard to maintain. I was able to come back with the win in the third Main and hold onto the points lead. We’re going take the positives and learn from the mistakes and move on to next weekend and go for the win again.”