Ferrandis & Cooper on their Southwick podiums 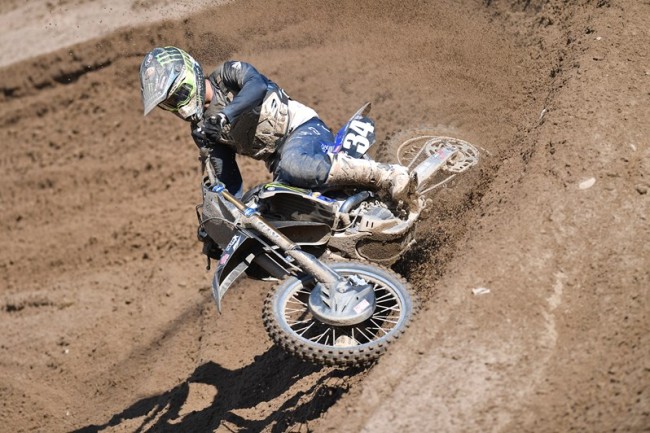 Monster Energy Star Yamaha Racing Team’s Dylan Ferrandis and Justin Cooper collected second and third respectively as they conquered an incredibly demanding and rough track at The Wick 338 in Southwick, Massachusetts for the sixth round of the Pro Motocross Championship. As the series hit the halfway point the duo continued to collect valuable points in the championship standings with Cooper sitting second and Ferrandis third. Teammate Colt Nichols started the day strong, helping him earn eighth overall. Ty Masterpool had a great first moto run to earn his best finish of the season in 12th, while Mitchell Oldenburg was 16th overall.

Ferrandis entered the weekend on the heels of his first moto win of the season just one week ago. As the gate dropped in the first moto, Ferrandis came around in the top 10 and moved into fifth by lap two. He was pushing and caught up to third and started to build a gap, which was needed as he made two off-track excursions while still managing to hold onto the final podium spot. With some positive changes between motos, Ferrandis got a better start and was quickly stalking the leader by the fifth lap. He was able to make the pass on lap seven and finished 10 seconds ahead of the runner-up.

In what has become a normal sight, the Yamaha riders were a fixture at the front of the first turn. Cooper nearly grabbed the moto one holeshot and settled into second. With the track already becoming very rough in just the first moto, Cooper settled in and maintained second until the end. His moto two start pinched him outside the top five, but he was quick to make his move to the front. He caught up to teammate Ferrandis by the fourth lap, but had to focus on holding his position as he encountered some back pain in the big bumps that had formed throughout the track. When the checkered flag waved, Cooper’s 2-3 helped him earn his fifth podium finish in six races with a third overall.

Nichols continued his consistency of top 10 finishes on one of the roughest tracks of the year. In moto one he tucked in behind Ferrandis on the opening lap, but wasn’t able to make the push he was hoping for to the front pack. He would eventually make it up to fifth by the end of the race. Moto two was a different story as the Oklahomian started 37th and had to use every lap to keep his top 10 streak alive. By lap four he was inside the top 20 and continued to pick off riders, finishing the moto in 11th. His 5-11 placed him eighth overall.

The rookie Masterpool continued his learning experience and tackled an incredibly tough track with determination. He moved through the pack in moto one and after starting 13th he broke into the top 10 to finish eighth. Masterpool’s strength was put to the test in the second moto after dropping down to 30th on lap two. He never gave up and finished out the moto in 15th to give him his best overall finish of the season in 12th.

With the Southwick stop only Oldenburg’s third race since returning from injury, he had to quickly overcome adversity in moto one. He went down on the start straight with several other riders and came around the opening lap in 29th. Even with being so far back, Oldenburg was able to make it up to 19th at the moto’s end. With a lot of his endurance going into fighting back in the opening moto, Oldenburg was still able to take advantage of a good start and finish the second moto in 14th for 16th overall.

The Monster Energy Star Yamaha Racing Team head to RedBud MX in Buchanan, Michigan for Round 7 of the Lucas Oil Pro Motocross Championship on Saturday, July 6.

“Today was another solid day for the team. It was big to have Justin and Dylan get on the podium, especially with Dylan winning the second moto. We have to keep building, get our holeshots back and we will be right where we need to be.”

“I feel like even with the heat, I’m still alright. It’s nice to get another moto win. We improved between the motos after going the wrong way for moto one. We talked a lot and we figured it out for moto two. I’m exhausted but happy to be up here and we’ll go after the overall again next weekend.”

“The track was the roughest I’ve ever ridden Southwick. Not that I’ve been here much, but even watching it on TV has never seemed to be this rough. I made some good changes between motos but the breaking bumps were really tightening my back up and I just wanted to make sure we maintained through the whole moto. It was gnarly and a really physically and mentally demanding track. I gave it my all out there today.”

“Bike was great all day and I’m honestly happy with the changes we have made in the past week or so. Conditions were brutal. The typical Southwick rough and tough you could say. I’m bummed I had a crash first lap of the second moto but that’s racing. We get to try again next weekend.”

“First moto I got a mid-pack start but worked my way up to eighth. In the second moto I went down on the second lap and was in dead last place. Then I had to do a pit stop to fix the bike but still ended up 15th so if I can keep it up I might be able to break into the top 10.”

“It started off really good in qualifying but I just didn’t have it today when it came to the motos. It was a tough track and it’s not easy when you’re not at your best. We’ll go back and work hard this week to try and make up for it next weekend at Red Bud.”