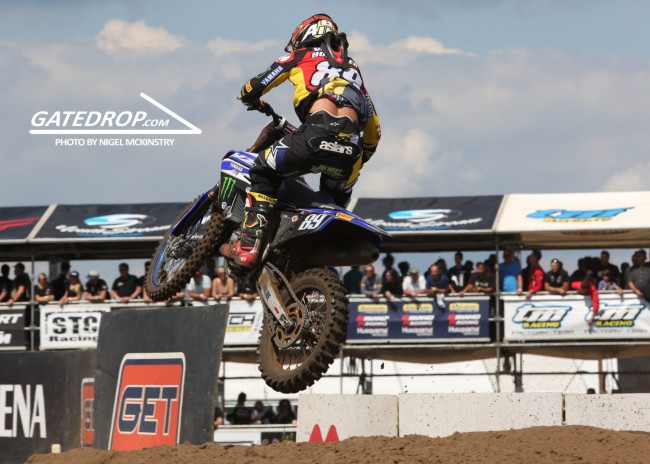 The 2017 MXGP tour will continue this weekend with the fifteenth round – of the nineteen round series – taking place at Frauenfeld-Gachnang, Switzerland, a new venue that made its FIM Motocross World Championship debut last year. The Swiss Grand Prix is an exciting prospect for Yamaha’s MXGP stars. Monster Energy Yamaha Factory Racing’s duo, Romain Febvre and Jeremy Van Horebeek, want to shake off the sand of Lommel and put their YZ450FM’s back inside the top five, while there is a different means of excitement for Wilvo Yamaha Official MXGP’s very own Swiss sensation, Arnaud Tonus, as it will be his first ever home Grand Prix.

The Swiss Grand Prix could bring something special for Romain Febvre as it was the last time he was seen uncorking a bottle of champagne on the MXGP class podium. The Frenchman earned his place on the third step of the box in 2016 after charging from outside the top-ten, to finish second behind the eventual champion, Tim Gajser, in the final race of the day.

Jeremy Van Horebeek, on the other hand, has been chasing ‘race fitness’ over the last few rounds after spending six-weeks recovering from a severely broken finger. The Belgian is feeling strong on the bike, he has only been lacking a small amount of physical endurance, particularly in the second races. Meanwhile Arnaud Tonus is bound to feel at home – in more ways than one – on the firm Swiss soil, and should be one to watch onboard the all-new 2018 Yamaha YZ450F.

Situated in the North East of Switzerland, the man-made track in Frauenfeld-Gachnang offers an all-new experience to the world’s fastest MXGP riders with its unique, flat yet rough, rutty, fast and jumpy layout. The circuit was built specifically, last year, to rebirth the Swiss Grand Prix which before making its vibrant return to the calendar – that saw the grand stands swell with 45,000 screaming fans – last hosted a round of the FIM Motocross World Championship back in 2001, at Roggenburg.

“Normally I am pretty fast in the sand, and I proved that in the first race in Lommel, but the result didn’t show it, but in Switzerland it’s completely different. The track is on firmer ground and it’s quite difficult to find places to ride faster than everyone else because on tracks like that, everyone can ride quite fast, but I am happy with how I feel on the bike. We have made some changes to improve the bike on the start and I think we did improve quite a bit in Lommel and I also felt good on the track so I am looking forward to racing in Switzerland.”

“I like the track in Switzerland. If it doesn’t rain, it will be really cool to ride. So far it has been harder to come back from my injury than I thought, in terms of race fitness because the level is really high this year. I hope after one more week of training and recovery, I will be almost back to 100%, and the track there is not as gnarly as Lommel, so it should be good.”