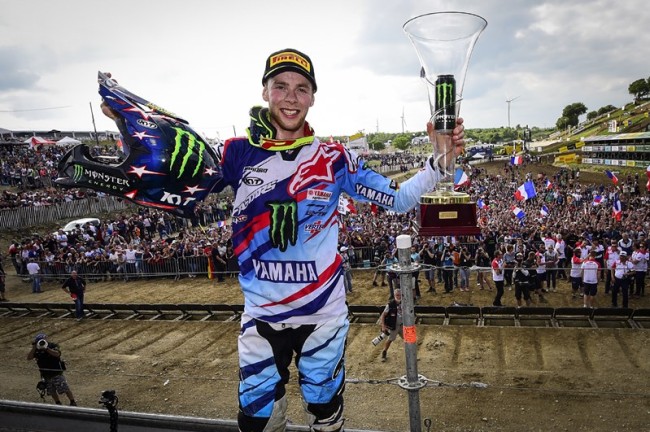 Monster Energy Yamaha Factory Racing Official MXGP Team rider Romain Febvre won his home GP on Sunday, calling on his early-career Supermoto skills to demonstrate steely mastery of the steep uphills and long downhill jumps at the MXGP of France. The overall victory in front of tens of thousands of French motocross fans came one day after Febvre signed a three-year contract extension with Yamaha that will keep the 2015 FIM World Champion on a YZ450FM until 2019.

Kemea Yamaha Official MX Team rider Valentin Guillod finished seventh overall in France, struggling in the second race with a broken rear wheel after a competitor knocked him sideways on the track. Febvre’s teammate Jeremy Van Horebeek had excellent starts in both motos, finishing fifth in race one, but also fell victim to bad luck when a rider crashed into him after the start of race two.

Febvre finished second in the first moto, less than one second behind Slovenian Tim Gajser in a race-long duel up and down the track. The two riders pulled away from the pack early, with Febvre kicking up a steady stream of stones and roost as he kept his competitor behind him, thrilling the crowd on a sunny day in the French department of Charente Maritime. Only in the final two laps could Gajser come around Febvre, and the distance between them at the finish line was just 0.610 seconds.

In race two Febvre changed tactics, putting Gajser up front and then waiting until opportunity knocked and a door opened, allowing the French champion to pass and quickly distance his competitor. Thousands of fans rose to their feet to cheer as Febvre opened up a gap and went on to win race two by 10 seconds, taking the overall victory and rising to the top step of the final podium.

Guillod again demonstrated top speed in his first season on a YZ450F, circling the top five in race one and adapting mightily in the second race when a broken rear wheel changed his ability to accelerate and brake on the constantly up and downhill race track. The Swiss rider finished in the top 10 in race two and seventh overall, and is closer each weekend to a breakthrough top five.

Van Horebeek had top five speed and perhaps faster in France, and showed in race one that his lingering wrist injury has improved with treatment and training. But bad luck after a great start in race two put the Belgian at the back of the pack when a crashed rider beneath him could not remove his tangled motorcycle from Van Horebeek’s YZ450FM, and the two riders spent nearly one minute to right themselves.

Van Horebeek chased back from 33rd to 18th in race two, and salvaged 11th overall in France. The MXGP riders will take next weekend off and return to racing at Matterly Basin in the UK on June 18-19.

With his win in France, Febvre remains in second place in the 2016 FIM World Championship standings, and adds distance to Antonio Cairoli behind him. Van Horebeek is sixth, 83 points clear of his nearest rival, and Guillod climbs one spot to eighth, four points ahead of Kevin Strijbos of Belgium.

“To celebrate my new contract by winning at home makes me very happy. I’d like to thank Yamaha with this victory today. To win a GP, especially the home GP, in front of the crowd is awesome.”

“We had a good feeling in the morning and worked hard on the start for the track here at Saint Jean d’Angély. The mechanics and directors saw every detail in the paddock and every turn on the course and we won this all together.”

“After three of four laps in the second moto I broke my rear wheel, and every corner was sliding and slippery, and that made acceleration difficult. I tried to do my best, but it was just bad luck.”

“I made really good speed in the first moto, and I was really happy with the result. I think a top five is a very good possibility, and I’m looking forward to Matterley Basin in two weeks.”

“I had an awesome start, and then I couldn’t avoid the guy who crashed in front of me. It took me a minute to get the bike off of him, and it was just bad luck, because once the race is gone all you can do is chase and try to hold on to some points.”

“I’m really happy with what I did today, but bad luck just ruled the day. I really hope my wrist gets better in the next two weeks, and I think a podium is coming soon.”