Febvre talks about his weekend in Mexico 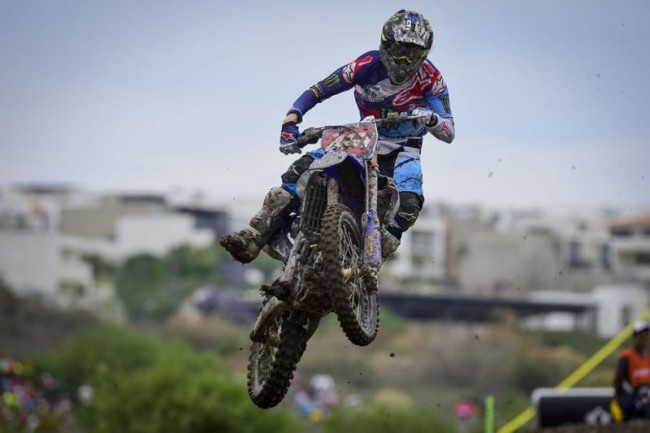 Febvre pushed his YZ450FM out on the morning race to a clear lead after qualifying conservatively on Saturday under much cooler weather conditions. Sunday’s 30-degree heat meant water spread by organizers on the high-altitude, hard-pack track pooled in some corners and evaporated in others, leaving the track in a highly variable state that challenged riders and provided for dramatic race action as the day wore on.

When Russia’s Evgeny Bobryshev bobbled his 2nd place after five laps, Febvre pounced from 3rd and set off after race leader Tim Gajser, keeping the Slovenian within 2-3 seconds until lap 14 when the race leader made a mistake and Yamaha’s 2015 World Champion sailed through to victory in moto one. Van Horebeek started in 10th and found himself caught in a quartet of unpassable riders through most of the morning race, passing Tommy Searle of of Great Britain and then being passed by Glenn Coldenhoff of the Netherlands before finishing 11th.

Guillod regained some of the start speed he had in Thailand, where he scored his first MXGP holeshot, and then showed off phenomenal corner speed on Sunday against Searle and Italy’s Antonio Cairoli for a mid-moto game of cat and mouse before crossing the line 9th in the morning race.

For moto two Febvre and Gajser quickly slipped away from the rest of the pack and set themselves up for a challenging duel on the deeply-rutted track that had turned loose and marbley under a blazing Mexican sun. The French World Championship points leader regularly showed the fastest lap times as he chose to leave Gajser in front of him by less than two seconds through uncrossable lines and jumps that turned hard and slick but provided excellent traction.

But Gajser proved the elusive in the late race, and when Febvre bobbled his rear end on the unforgiving track the gap became unbreachable, with Gajser soon easing out to a 10-second advantage until the finish. With a 1-2 finish in the motos and 2nd overall in Mexico, Febvre keeps his 2016 World Championship red plate by a secure but slim 3-point margin ahead of MXGP Latvia at the end of April.

Van Horebeek rose steadily in moto two, passing through the same tough quartet of challengers he faced in moto one and then stamping his authority on 7th as gaps in front and behind stretched to nearly 10 seconds in both directions. Overall the Belgian rider finished MXGP León 9th, but slipped to 6th in the 2016 World Championship.

Van Horebeek’s chief mechanic Luigi Rossino showed heroic effort at MXGP León, working full-speed to support the Belgian rider and his YZ450FM despite catching a flu virus in the week between Argentina and Mexico.

Guillod caught Cairoli again after lunch and gave the 5-time World Champion a tough race to finish in 8th, his first ever double-moto GP Top-10, and a morale-boosting 7th overall in Mexico. the Swiss rider moves up to 11th in the 2016 World Championship and helps Yamaha secure valuable points to keep its lead in the Manufacturer’s Cup over Honda by two points.

“We made a few changes on the bike for the second moto, and it seemed to work well because in the first corner the start I was right at the front and ready to chase. I was faster in the beginning that Gajser because I could choose a better line, but soon he found the right one and after that the track was like one single line and it just wasn’t possible to pass.”

“I’m a little disappointed that I couldn’t pass him, but the key today was the holeshot. The team did everything right today and we still have a very good result so I am thankful to them and ready to go to Latvia.”

“We waited until Saturday morning to receive the bike, and the mechanics woke up really early in the morning and did a great job to make everything ready before one o’clock. The guys from the electronic GET did a really great job on the injection, because here the altitude is really high, and everyone knows the bikes have less power. I can’t thank them enough.”

“This is the first time I finished a race with two Top-10s, so I’m really happy about that and I took good starts in both race and rode with the guy in front of me all day. It’s really important to go at the higher speed and learn more in these races.”