Febvre talks about his epic win at Valkenswaard 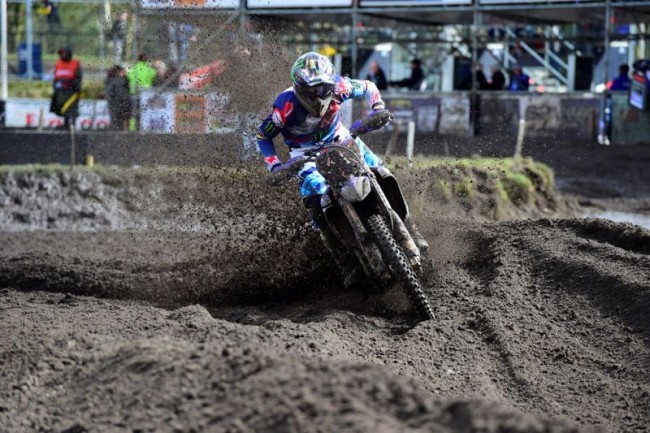 Monster Energy Yamaha Factory MXGP rider Romain Febvre won his second Grand Prix in a row today, fighting a tricky and unpredictable course of compact, wet sand in Valkenswaard and a pack of hungry challengers at the MXGP of Europe.

Febvre began today having qualified third in dry conditions on Sunday, and rode the first moto in search of a rhythm that he could’nt quite catch, finishing third. Monster Energy Yamaha Factory teammate Jeremy Van Horebeek came off a much poorer gate selection to gain spots steadily in the morning race, finishing fifth with much optimism for the second moto.

Kemea Yamaha Official MX rider Valentin Guillod rode steadily from a good start to finish 12th in moto one, while DP19 Yamaha Official’s David Philippaerts crashed in the opening lap, injured his back slightly and leaving him unable to finish the early race.

In the afternoon race the sun shone brightly, but on top of wet pools of muddy sand and tricky bumps that defied easy riding and required constant focus. Van Horebeek guided his YZ450F expertly over the constantly climbing first half of the Valkenswaard track and held a steady second place throughout the moto, until teammate Febvre passed him in the final two laps to challenge the leader and ultimately win the race.

Guillod crashed on the opening lap and struggled to regain position throughout the race, finishing 16th. Philippaerts recovered from his back injury to place 19th in the second moto.

MXGP will next race in two weeks in Argentina at the popular Bariloche circuit in the Patagonia region.

“The race was tough and in the first moto I never really found my rhythm. The sand here is very wet, very compact and very tricky, and each lap was different with a lot of bumps and not a lot of lines.”

“I had a small crash in the second moto and lost some time but no positions, and then I found the missing rhythm and tried to race to the finish for the lead. In the last lap I found Cairoli ahead of me and did everything I could to pass him and take the victory.”

“The first moto I had a bad start, but I worked up through the race and kept a good speed to the finish. In the wet sand it’s very heavy and difficult, and the track here is a big challenge even for riders with a lot of experience in this kind of motocross.”

“It’s good to start the season in Europe with this race in the Netherlands, and we have a lot more tracks and conditions ahead of us until the end of the championship in October.”