Febvre, Simpson and Van Horebeek on their Swedish GP! 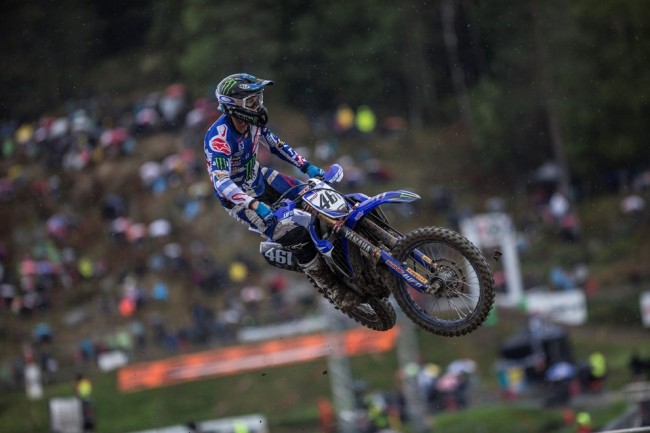 Monster Energy Yamaha Factory Racing’s Romain Febvre was a beam of light out on a track that is shadowed by a stunning rocky mountain – Uddevalla – as he celebrated his first race win of the season with a bottle of champagne on the second step of the podium. Jeremy Van Horebeek bounced back from an unlucky start to the weekend to finish sixth overall.

Monster Energy Yamaha Factory Racing’s Romain Febvre was fast right from the first moment he put his Pirelli tyres on the complex dirt here in Uddevalla – where round sixteen of the FIM Motocross World Championship took place. The Frenchman got off to a good start in the opening race where he entered the first corner in third place before ripping around the outside of his fellow countryman Gautier Paulin to take over second place at turn-two. Less than half of a lap later and the initial race leader Evgeny Bobryshev came up short on a small double and handed the Yamaha ace the lead.

The slick and edgy surface of Uddevalla proved difficult to read this weekend with sporadic showers making certain areas of the track rough and rutty. Febvre was a victim to the brutal terrain and fell from the lead when he lost the front-end on a left-hand turn and dropped back to twelfth place.

A decent start and an impressive return to racing had Wilvo Yamaha Official MXGP’s Shaun Simpson in seventh place on lap two with Monster Energy Yamaha Factory Racing’s Jeremy Van Horebeek hot on his heels. Being inside the top-eight so early in the race was already an achievement for Van Horebeek after he was denied a good gate-pick when another rider caused him to crash in the Qualifying Race. His back brake reservoir was destroyed in that accident by a rider that tried to wheelie over-the-top of his bike which meant he couldn’t re-join the race and had to line-up today with the thirtieth gate-pick.

Heavy rainfall in the latter part of Race 1 today made the already tricky conditions even more challenging. The track demanded a keen eye for lines that were smooth, as well as a tender touch on the throttle because certain areas of the circuit were incredibly slick. Febvre redeemed himself as he clawed back positions to eventually pass Arminas Jasikonis and his teammate, Van Horebeek for seventh place with 3-laps to go, which eventually turned into sixth with Bobryshev facing an issue that dropped him back to eighth. Van Horebeek survived a last-ditch attack from an overly eager Antonio Cairoli to finish seventh, while Simpson was impressive in his first race back, going the distance for eleventh.

The second race was cold hard evidence that the Febvre of old is back. The former champ took his fourth holeshot of the season, got his head down and inched away from the defending champion Tim Gajser for his first race win of the season – and first since June 5th 2016 where he won the final moto at his home grand prix in France. His excellence in the second race also landed him on the podium – the second step – for the first time in 2017.
Van Horebeek used much of his YZ450FM’s torque and power as he charged from the outside gate to emerge from turn-one inside the top-eight. Fired up and hungry for more, he barged past Clement Desalle and Glenn Coldenhoff to complete the opening lap in fifth place before undoing all of his hard work with a small mistake. By the middle of the race, Van Horebeek was back in the flow of things and managed to hold off the defending champion, Antonio Cairoli, for seventh place and sixth overall.

Simpson’s return to racing was superb with the Scot moving from fifteenth place on the exit of turn-one and quickly into the top-ten. His speed and strength was amazing after having more than three-months off of the bike. Only a stroke of bad-luck with a rock smashing and bending his gear lever ruined the result of the final race, although he managed the adverse situation as best he could and came home in fourteenth, for thirteenth overall.
The next race of the FIM Motocross World Championship, round seventeen – of nineteen – will take place in Jacksonville, Florida, USA on the weekend of September 3rd.

Romain Febvre
2nd MXGP Overall, 6th MXGP Championship Standings
“It was a good weekend overall. I had almost two holeshots. In the first moto I was leading from the first lap but I crashed on my own and then got hit by Max Nagl once I was back on my bike, so I crashed again. I still came back to sixth, so I know my speed was good. I just feel that I should have won the first race, but in the second race I led every single lap and won. I am happy to be back on the podium, I want to thank my team and also all of my sponsors that still believe in me.”

Jeremy Van Horebeek
6th MXGP Overall, 8th MXGP Championship Standings
“This weekend was not too bad, 7th and 6th for 6th overall which is pretty good because yesterday was a disaster with the crash and the guys hitting my bike and damaging it. I had to have 30th gate pick. I still managed to get inside the top-ten off of the start which was the key to my weekend. The other boys also had good starts, they were all inside the top-ten so it was hard to move forward, but I didn’t do so bad. I still want to be on the podium but I still felt as though we took a step forward in comparison to last weekend. I just feel like it’s a shame I got hurt, it broke my rhythm big time, but it is what it is. I will keep working. We still have three GP’s and the nations to go. Plenty of time to get back on the podium.”

Shaun Simpson
13th MXGP Overall, 17th MXGP Championship Standings
“I am really pleased with how the weekend has gone. Coming in, I just wanted to get through the weekend, ride, and get some information about the bike. But it seems that we were still competitive. I was just outside the top-ten in both races, which I can’t complain about. In the first race I was behind Herlings for a few laps and he didn’t pull away too quickly. I feel really good about the new 2018 bike and about the new set-up. We had some small problems in the second race like I think a lot of people had, I think the really deep ruts bent my gear lever. But I feel positive and look forward to going out to America and getting inside the top ten and before the season is out, hopefully the top-five. I am loving to be back out riding. I am happy to be going home healthy and I am looking forward to the rest of the year.”