Febvre on dominating Loket – We are back 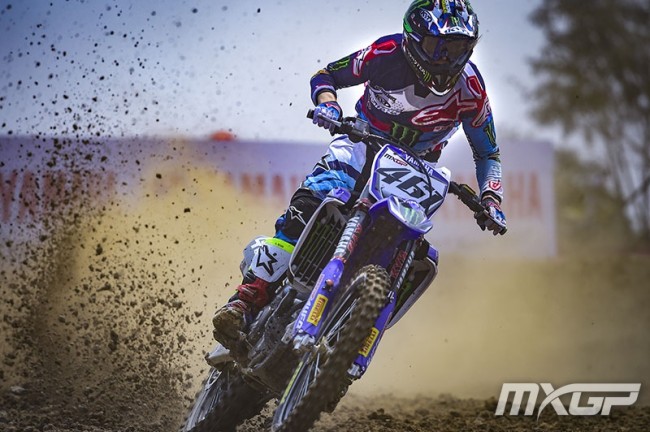 Monster Energy Yamaha Factory MXGP’s Romain Febvre made a welcomed return to the top step of the podium after dominating the Czech Grand Prix as the pole-man and winner of both races. His victory ends a three-year drought with his last victory being at the French Grand Prix back in 2016. The 27-year-old Frenchman was joined on the podium at the thirteenth round of the MXGP World Championship by his Monster Energy Yamaha Factory MXGP teammate Jeremy Seewer, who uncorked a third consecutive bottle of champagne to celebrate a personal achievement of four podium finishes this season.

In the opening race of the weekend, the YZ450FM mounted teammates Jeremy Seewer and Romain Febvre rocketed out of the gate and led Monster Energy Wilvo Yamaha MXGP’s Gautier Paulin around turn-one. A frantic first lap saw Paulin drop back to fourth as Febvre made a pass for the lead and instantly aired a small gap.

From there, Febvre was flawless as he stormed to a second race victory of the season, while Seewer was demoted to third with 3-minutes left on the clock. Paulin finished 1-second further adrift in fourth position, while his Monster Energy Wilvo Yamaha MXGP teammate Arnaud Tonus struggled for energy as a result of a bacterial infection he has been fighting since his return from Indonesia 11 days ago. The number ‘4’ of Tonus rounded out the top-ten.

An incredible start to the second and final race of the day saw all four YZ450F mounted MXGP riders emerge from turn-one inside the top-five. Seewer led the chase, while Febvre trailed, but it was the ‘461’ who did not mess around on the opening lap as he charged past everyone including the championship leader, Gajser, to challenge his teammate for the lead.

After a thrilling 4 lap battle for the top spot, Febvre managed out-brake his teammate and take claim of the position on one of the steep downhills. Gajser also applied the pressure and forced a pass on the Swiss sensation a lap later but could not catch the ‘461’ who was in a league of his own on the choppy, slick and slippery clay of Loket.

The trio finished in that order. Febvre won, Seewer was third while Paulin and Tonus rounded out the top-five.

Paulin has moved up into third in the MXGP Championship Standings after posting a 4 – 4 scorecards for fourth overall, while his teammate, Tonus, remains fourth in the championship chase after a tenth in Race 1 was significantly improved with top-five finish in Race 2, for eighth overall.

Both teams look forward to the MXGP of Belgium next weekend, which will take place in Lommel, a track that is less than 30km from the current residence of all four riders.

Romain Febvre
MXGP Grand Prix Winner, 50-points
“I feel amazing. The whole weekend has been good for me. Right from the beginning my speed has been good, and I managed to go 1-1. I am really happy. It has been a long road back to victory and not an easy one. Many tough GP’s and some injuries. We are back! I am so happy, and happy for my team Monster Energy Yamaha Factory MXGP. It means everything.”

Jeremy Seewer
3rd MXGP Overall, 40-points
“I struggled to set-up the bike here, on a 450cc it’s really tricky because on a track like Loket we have a bike with so much power, but no traction. I managed to turn it around and find my flow. Romain was on another level today, but I think I had the same speed as Tim (Gajser), so it would have been nice to have kept second position. I am happy to be on the podium though, and the most amazing thing was to take three holeshots.”

Gautier Paulin
4th MXGP Overall, 36-points
“4-4 was my place today. I was fast all weekend. Starts were key on this track. I did make a few mistakes, but that is part of racing. I am happy with the full crew and I am happy to be back at a good level and to be pain free, which is a big deal. Fourth was my place this weekend, so it was a good weekend overall.”

Arnaud Tonus
8th MXGP Overall, 27-points
“With how I felt, this weekend was quite OK. I was really sick for a week and a half. I had a bad bacterium that infected my body and made me very sick. In the last 10 days I could only ride once, so I knew it was going to be a tough GP. To come away with 10 and 5 in the races, was not so bad considering how I felt.”