Febvre on a difficult weekend 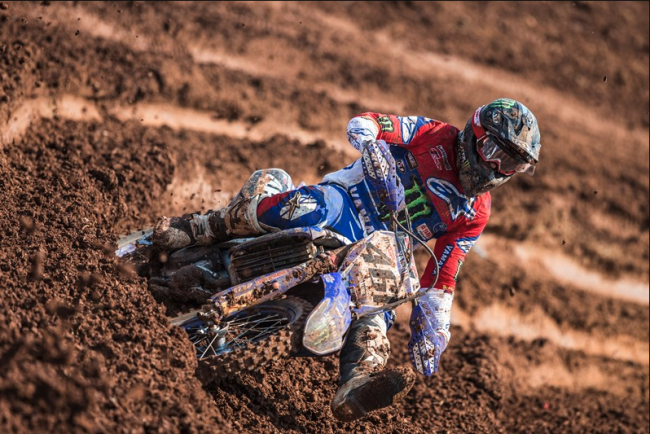 Monster Energy Yamaha Factory MXGP’s Jeremy Van Horebeek made a welcomed return to the top-ten at the thirteenth round of the FIM MXGP World Championship in Semarang, Indonesia this weekend. After a dramatic start to the Grand Prix with Wilvo Yamaha Official MXGP’s Jeremy Seewer and Monster Energy Yamaha Factory MXGP’s Romain Febvre crashing out of Race 1, Seewer was able to redeem himself with an encouraging top-five finish in the final race for eleventh overall, while Febvre was sixteenth overall after another dramatic turn of events in Race Two.

The circuit in Semarang was widely considered one of the most spectacular tracks on the calendar. It was wide, fast and flowing with enormous jumps and plenty of changes in elevation. Wilvo Yamaha Official MXGP’s Jeremy Seewer and Monster Energy Yamaha Factory MXGP’s Romain Febvre were two of the fastest riders around the all-new circuit. Febvre set the fastest lap time in Timed Practice and did the same again in the Qualifying Race where he finished in fourth position behind Seewer, who drove home a third-place finish, while Jeremy Van Horebeek was eighth at the flag.

With the scintillating sun cooking the clay, any water that was used to combat dust made the surface of the track slippery. If the riders had the choice between a dusty circuit or a wet and slippery one, they would say that the water was the better of two evils. With the stifling hot temperatures rising above 33 degree Celsius, the track crew was left with no choice but to put water down on the fiery orange clay. One of the first victims was Wilvo Yamaha Official MXGP’s Jeremy Seewer who had another rider cut him off on the up ramp of an enormous triple jump. The Swiss rider managed to walk away unscathed from the spectacular crash, but the damage to his bike after such a heavy impact meant he could not rejoin the race.

Romain Febvre was silky smooth on the throttle of his YZ450FM as he charged past his arch rival Clement Desalle to take over third place before being pushed back to fourth by the championship leader Jeffrey Herlings a couple of laps later. With five minutes left on the clock he spied another opportunity to reclaim third place. He took the position from the defending world champion Antonio Cairoli with three minutes left on the clock, but less than a lap later all of his hard work came undone when he lost traction on the face of a jump, fell and broke his handle bars which meant he could not finish the race.

Jeremy Van Horebeek was left to fly the flag for the Yamaha riders as he rediscovered some of the speed he had lost over the last few rounds. The Belgian was happy with the progress he made on his way to an impressive sixth place in the opening race.

The start at the all-new Semarang circuit was an interesting left hand turn into a dragon-back, which is a collection of jumps that are various heights. In the final race of the day, Febvre and Van Horebeek were caught in a first turn incident that saw Febvre fall while Van Horebeek lost time and positions over the ‘dragons back’ as a result. Seewer was out for redemption and launched into third-place, as Febvre dusted himself off and re-entered the race in last place.

A good start was critical this weekend with the rock-hard clay developing a very limited selection of fast lines. Van Horebeek did his best to re-group after losing a handful of positions at turn-one, while Febvre did his best salvage valuable championship points. The Frenchman managed to cross the Finish Line in twelfth place after he passed his teammate on the last lap.

Febvre’s twelfth place allowed him to claw back enough points for sixteenth overall, while Van Horebeek’s 6-13 scorecard was enough to wrap up the Grand Prix in ninth place.

Up front, Seewer was hungry for a good result. The rookie was all heart as he put chase on the top-three after losing one position to Clement Desalle. The twenty-three year old was able to keep Cairoli at bay for the entire race before a small crash dropped him back to fifth. Nevertheless, a top-five finish was a positive end to a challenging weekend where he almost finished inside the top-ten.

The next round of the FIM Motocross World Championship will take place in Loket, Czech Republic on the weekend of July 22nd.

Jeremy Van Horebeek
9th MXGP Overall, 9th MXGP Championship Standings
“It was a good weekend. It’s been a long time since I felt this good on the bike. It’s not an easy road back when we are riding at such a high level. It’s been a long time since I was sixth, but I still want more. I felt like I used all my energy in the first race, but I am happy to have achieved one good result this weekend. In the last race I thought the track was a little sketchy and I just wanted to go home safe. Now we have two weeks to keep building, and hopefully the good results will be back soon.”

Jeremy Seewer
11th MXGP Overall, 8th MXGP Championship Standings
“It was a positive weekend. I was third yesterday but I had a big crash in the first race when a rider came across on a big triple. Luckily I saved it, but then I hit a wall really hard and destroyed my bike. I was not hurt, but my race was over. I was really happy to come back in the second moto with some decent speed. I was fourth all of the race but had one silly crash and finished fifth, and I am angry at myself for that, but I am happy to have still finished fifth and unhurt after that really crazy first moto crash.”

Romain Febvre
16th MXGP Overall, 5th MXGP Championship Standings
“Not a good weekend for me. I crashed in the first race and broke my handlebars into two pieces so I could not finish. That was frustrating, and then in the second race I had a decent race but I fell and was run over. I was destroyed, but I kept going and got back to twelve. It sucks for the championship, but it was just one of those weekends.”