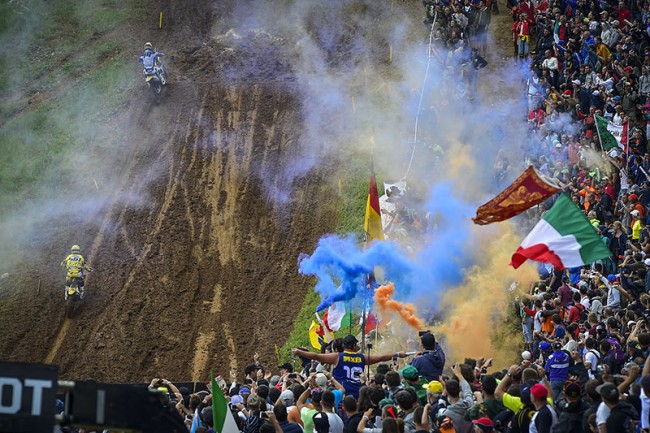 MXGP of Italy, round nine of the FIM Motocross World Championship just added a mudder to the already extremely diverse series. Torrential rain flooded the premises earlier this morning, which left the track drenched and the riders caked in mud. Thankfully, the rain stopped around 11:30 in the morning and managed to hold off for all of the races.

Although it wasn’t the worst mud race ever, it was still extremely tricky especially with the classic track of Maggiora being clay based with a lot of elevation and cambered turns. Mud is known to be a bit of an equalizer in motocross circles, which may have been a contributing factor to the results in MXGP, but nevertheless the deserving overall victories went to Yamaha Factory Racing Yamalube’s Romain Febvre in MXGP and Honda Gariboldi’s Tim Gajser in MX2.

Yamaha Factory Racing Yamalube’s Romain Febvre is on fire at the moment. The Frenchman is definitely a legitimate threat for the MXGP crown this year, which he confirmed with his heel-clicker sealed win in race one. Despite having a humungous crash in race two where he clipped Hitachi Construction Machinery Revo KTM’s Shaun Simpson, he bounced back for sixth and his second consecutive MXGP overall victory. “I am happy for my team because it is Yamaha’s 60th anniversary and we are in yellow, so that is nice. In race two there was a little bit of sun on the hill so I had to change my line quick and I crashed. I had to ride with no front brake, on this track you can’t imagine how hard it was but I wanted to win the GP so I kept pushing.”

Rockstar Energy Suzuki World MXGP’s Kevin Strijbos put in an outstanding performance on his return from injury with an epic last lap pass on the championship leader, Max Nagl, to win the final race of the day. Strijbos doesn’t appear to have lost much speed in his time off and was stoked to have made such a solid come-back, “I was happy to be back here and with my thumb and my wrist everything was fine. I was pretty happy it rained because I like that a lot.”

The Red Bull IceOne Husqvarna Factory Racing squad are getting used to hanging around the podium. This time, instead of being there for their red plate holder, Max Nagl, it was the happy go lucky AustralianTodd Waters, who landed on the podium for the first time in his young MXGP career. “It’s hard to talk because of the smile on my face. There was a few emotions, I came past pitlane in the last race and I got a pit board ‘podium position’ so I wanted to stretch those throttle cables and go for it for sure.”

It was an amazing weekend for the former FIM Motocross World Champion DP19 Yamaha Racing’s David Philippaerts who played a huge part in the marvelous atmosphere here at his almost local circuit of Maggiora. Philippaerts was unfortunately edged off the podium with Strijbos’ last minute pass on Nagl. Nevertheless, the Italian who tied with Todd Waters on points, was undoubtedly a winner in the eyes of the public.

Yamaha Factory Racing Yamalube’s Jeremy Van Horebeek had a rusty start to the season which was topped off with a broken foot at MXGP of Trentino. The injury vanquished all hopes of bettering last year’s result of vice-world champion. Nevertheless, the Belgian is mounting his come back which is seemingly moving in the right direction with a third place in race one that was followed by a remarkable ninth in race two, which he obtained after stacking it on the first corner. Van Horebeek rounded out the top five.

With torrential rain being a huge factor in how the results shaped up today, the red plate holder, Red Bull IceOne Husqvarna Factory Racing’s Max Nagl was forced to do some damage control after he went down on the opening lap in race one. After only coming home in fifteenth, the German evened out his day with a near race win in the final moto but it was only enough for seventh overall.

As for the defending champion Red Bull KTM Factory Racing’s Antonio Cairoli, the Italian star put in a brave performance today riding with a broken hand. Tony said on the heels of race two, “the first moto was the hardest of my career, the track was so bumpy and rutty & I could hardly hold on to my bike but it was good for the championship.”

As for Assomotor Honda’s Alessandro Lupino, he also added to the crowd intensity with a fantastic start in race one, which resulted in his season best finish, fifth. Unfortunately a great day was bought to a Holt for the Italian who could only manage twentieth in race two after a series of crashes.

m Gajser mastered the slip and slide circuit here at a very slick and treacherous Maggiora. The Slovenian had the balance between attack and respect dialed on the chewed up track, which saw him awarded with the grand prix victory. Gajser smiled, “I had a couple of bad weeks where I was crashing and not riding so well but then everything changed and I’m back at the front again. It was great to win another GP.”

Expecting perfection in a mud race is more than unrealistic, which the maturing Red Bull KTM Factory Racing’s Jeffrey Herlings knows better than anyone. The Dutchman mentioned after dominating every lap in race two that he couldn’t find his rhythm in race one and also had some issues with vision due to water between his tear-offs.

Rockstar Energy Suzuki Europe’s Jeremy Seewer is one rider who always has his head screwed on. He doesn’t take a lot of risks yet is extremely talented. His smooth and smart riding style landed him on the third step of the podium for the second time in his MX2 career, “I am happy to get my second ever podium today, the track was really difficult with the weather, so the start was actually the key. I got two really good starts and two really good finishes, so I am really happy and I’m already looking forward to the next GP’s.”

Wilvo Nestaan Husqvarna Factory Racing’s Aleksandr Tonkov claimed his first ever race win this weekend and added his name to the terse list of MX2 race winners in the ‘Jeffrey Herlings era’. The Russian was in line for his first ever grand prix victory today but a crash with Red Bull KTM Factory Racing’s Pauls Jonass left them both on the deck and dropped him back to fourth for the day.