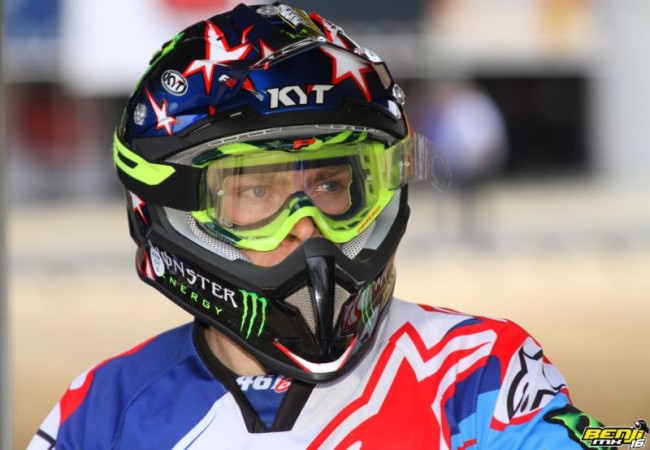 Watching a round of the motocross grand prix at Saint Jean d’Angely is one of the best ways to experience just how spine tingling this sport can be. Everyone at the venue had a front row seat to round ten of the FIM Motocross World Championship this weekend where the fans were entranced by the phenomenal speed and skill of their nations own Monster Energy Yamaha Factory Racing’s Romain Febvre and the Flying Dutchman, Red Bull KTM Factory Racing’s Jeffrey Herlings who put in two mind blowing performances each to stand on the top step of the podium in their respective classes here at the MXGP of France.

It’s official! Honda Gariboldi’s Tim Gajser and Monster Energy Yamaha Factory Racing’s Romain Febvreare from another planet. It’s obvious these two have raised the bar in motocross globally and what they are bringing to the 2016 MXGP world championship is nothing short of incredible.

An exuberant crowd was treated to some of the best racing of the season today as their home soil hero Romain Febvre threw everything but the kitchen sink at Gajser for the win in race 1. There wasn’t a lot in it at the checkers as the duo went hand in hand across the finish line, but it was the championship leader, Gajser who was deemed the winner by a very narrow margin.

Fired up, the Frenchman and defending world champion, Febvre, some how turned it up a notch in race two when passed Gajser for the lead and got his head down. On the fence line, Febvre Fever was spreading like wildfire as the 461 laid it all on the line in bid for victory here at his home grand prix.

No words will do the racing today any justice as it was just unreal with Febvre getting the job done to have the national anthem played for his nation as the winner of the MXGP of France.

As for the Slovenian… or maybe we should say ‘Fast-venian’? The nineteen-year-old rookie sensation was nothing short of incredible today as he tied on 47 points with Febvre and maintained his 24-point championship lead.

Team HRC’s Evgeny Bobryshev had to fly the flag for HRC after his teammate Gautier Paulin withdrew from racing this morning after his ridiculously massive crash yesterday. The Russian, Bobryshev, was the top qualifier here in France but couldn’t quite work out how the youngsters were riding so fast “I don’t know how those young guys were riding so fast, I have to check because I tried to follow them but I couldn’t, they were really quick.” He said, “but I’m really happy to be on the podium, it was important to me to do well here because I thought that I could, so I am really happy.”

Red Bull KTM Factory Racing’s Antonio Cairoli looks hungry for wins but he seems to be just left scratching his head at the pace the youngsters are running. The eight-time world champ put in a solid ride in race one, but didn’t have anything for the young guns, Febvre and Gajser. who stormed away for the top two spots. The day was made a little more frustrating for the Italian in race two when he hit the deck at turn one and then dumped it again while trying to pass Rockstar Energy Husqvarna’s Max Nagl for tenth. TC222 battled back to seventh in that race, which was enough for fourth overall.

Monster Energy Kawasaki Racing Team’s Clement Desalle is slowly but surely gaining momentum. The Belgian is starting to look more comfortable on the green machine as he inches closer to the box.

If Red Bull KTM Factory Racing’s Jeffrey Herlings has learned anything over the last few years, it’s definitely race craft. The former two-time world champion has developed a very mature approach to racing. He is now looking at the bigger picture and instead of panicking when he’s not up front off of the start, he just rides his own race. In both races today The Bullet started from behind and knuckled down, which rewarded him with two commendable race wins and a huge extension to his points lead. He also matched Joel Smets’ record of 57 grand prix wins and made some history of his own as the first three-time grand prix winner here on the clay of St. Jean d’Angely. He now leads the 2016 MX2 World Championship by a massive 134 points over Jeremy Seewer.

Take a bow Benoit Paturel! Kemea Yamaha Official MX Team’s Benoit Paturel was the break out star today when he led almost every lap in race one only to be passed by The Bullet with two laps to go. Paturel was serenaded with a standing ovation from his fanatical home fans, which was 100% deserved after such a hair-raising performance. Proving he’s not a one-race-wonder, The Frenchman backed race 1 up with yet another epic ride to land on the second step of the podium for the second time in succession.

Meanwhile, since Team Suzuki World MX2’s Jeremy Seewer made Herlings work for the win at the MXGP of Germany last month, he has been fired up to lead races. While his all-new aggressive approach to racing has been outstanding to watch, it’s not been an easy pace to run for the Swiss star. This weekend though, he managed to keep his Suzuki rubber side down, for the first time since Teutschenthal and finished third overall which is his seventh podium appearance this year.

Red Bull KTM Factory Racing’s Pauls Jonass lost 6 points to Seewer in the battle for the spot of vice-world champion while Monster Energy Kawasaki racing Team’s Dylan Ferrandis had to learn the hard way just how important starts are. It is common knowledge to most people within the sport that starts are the make or break of a race. Unfortunately, two bad starts made life difficult for the Frenchman, who should have been up front battling for the win, and he only finished in fifth overall here at his home grand prix.

Rockstar Energy Husqvarna Factory Racing’s Max Anstie took charge of the Fox Holeshot competition with a massive holey in race two. The Brit didn’t finish the first race but turned it all around with an epic ride in the second race for second place.