Febvre and Van Horebeek on their Qatar performances! 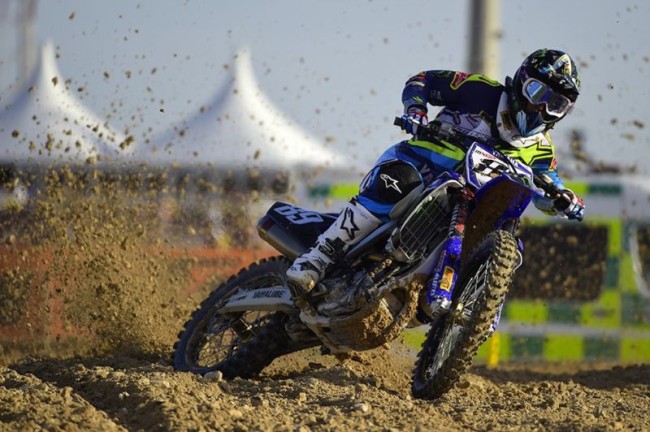 World Champion Romain Febvre opened his 2016 MXGP season in Qatar on Saturday during a smart, energetic set of races under the lights of Losail, with Monster Energy Yamaha Factory teammate Jeremy Van Horebeek joining him in the Top-5 at the end of the evening races.

In Friday’s qualifying race Febvre posted the fastest laptime at 1:45.805, quickly moving up from sixth to third. Van Horebeek’s speed on Friday showed distinct progress through a thick pack of riders, but had a small crash on the penultimate lap to drop back and earn a main event start just outside the Top-10. Kemea Yamaha Official MX rider Valentin Guillod pushed from 15th to 11th in the final laps of his MXGP debut.

Van Horebeek chose his first gate pick on Saturday wisely and passed through the early stages in 5th, where he held his lap times on the desert surface until midway through the race when the Belgian rider gained one spot to finish the early event in fourth.

Guillod managed a lesser start to find himself stuck early behind a large group of chasers before finally clearing a path for himself in a steady 13th until a slight bobble near the end dropped him one spot at the end of moto one.

Febvre’s first race of the evening resulted in a calculted third spot behind a lead duo that drifted back into him mid-race but provided little opportunity to pass on the wide lanes at Losail and the unpredictable dirt that provided changing lines from lap to lap.

In the second moto Febvre started in 4th but overestimated the length of a jump in the 4th lap and dropped his YZ450FM temporarily to lose a spot as the pack stretched out in a long line of riders all seeking to pounce on each other’s mistakes. In the space of two more laps however, Febvre more than compensated by overtaking two riders to race into second place, where he would finish for the night.

Valentin Guillod’s MXGP debut in Qatar was complicated by a start position that put the Swiss rider in 15th for the first moto and gave him very little room to stretch out and race at his own rhythm until much of the pack had cleared. He placed 14th in the early race but improved to 12th for the second moto and is now 12th overall in the Championship points classification ahead of next week’s race in Thailand.

In Suphan Buri the MXGP riders will again have to contend with heat, but unlike Qatar’s arid desert winds the southeast Asian race promises withering humidity and a burning tropical sun. Thanks to a winter of intense physical training and plenty of on-the-bike hours around Europe, Yamaha’s MXGP riders will likely carry their strong early-season form into the event.

“I had a slow start in the first moto, maybe 6th, and it was difficult after that to chase. In the second moto I was feeling much better, but I jumped too far and lost the front end in a crash. I didn’t lose much time, but I did lose two places, which I had to try to catch up.”

“We saw some progress here in Qatar, and hopefully we will see some more in Thailand.”

“I messed up my start position yesterday, but today I managed a pretty decent one in both motos.”

“It’s my best result here so far, and I’m stoked to leave in fourth position in the Championship. In 2014 I left here in fifth, and that year I came out vice World Champion, so we can take it step by step because I know I can do even better.”

“It’s a long season, and after Qatar we now have the information we needed at the start of the year and who the good riders are. I’m happy and I think the team is really happy to leave with 2nd and 4th.”