Fantic secure a podium on debut 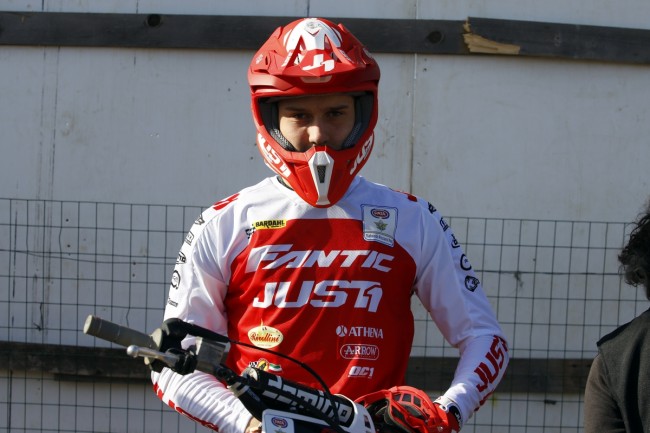 The first of the three races of the Internazionali d’Italia MX EICMA Series 2020 took place today on the sandy track of Riola Sardo (OR). The first round of the popular championship that traditionally opens the competitive season of the European motocross, saw the debut of the Fantic Motor Team, that is back at races after long time with the new bike XX125. In a warm and sunny day, the two riders, Andrea Bonacorsi and Andrea Rossi, went out on the tough and demanding Sardinian circuit with the right determination, motivated to do well. Fourth at the end of the timed practice session, Andrea Bonacorsi in the first heat was unable to make the most of the good gate pick, starting from in the middle of the pack but was made a good comeback that led him to grab the second place already in the third lap and third was his position until the finish line. In the second moto Bonacorsi started better but a crash with a lapped forced him to push hard to try coming back on the head of the race. The final third place hallow him to get on the second step on the podium of the day in the 125 class. Also Andrea Rossi’s day was positive, with the seventeenth fastest time in the timed practice session he was able to start in the top ten of race one, crossing the finish line after thirteen laps in fifth place. The second heat was also good as he was ninth at the end of the race after being last, due to a crash at the start of the moto. Next round of the Internazionali d’Italia series in seven days on the sandy track of Ottobiano.

Corrado Maddii, team manager: “It is the first race for us, for Fantic and for this beautiful project and I must say that I am satisfied. We certainly still have to work hard but this was obvious and we’re not afraid. This was an important starting point for all of us, now we know where we are and on what we have to work and we are happy with how things are going”.

Andrea Bonacorsi #32: “This race started immediately well with the good morning qualifying closed in fourth place. In race one the start was not the best but with a good comeback I finished second. Second start was better and in a short time I managed to get back close to the lead, unfortunately a contact with a lapped made me lose ground and even if in the end I came back it was not enough to attack for the lead. We continue to work hard as always and go to Ottobiano confident”.

Andrea Rossi #420: “I am happy with this first race of the season; in the first heat I started in the top ten and with a good rhythm I moved to fifth position. In the second moto, due to a contact with another rider in the very first corners, I went on the ground, regrouping from the last position and at the end I managed to recover up to the ninth place”.