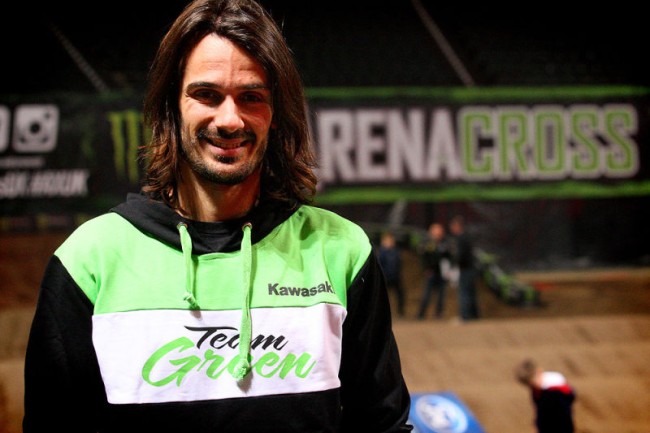 Bad news for Fabien Izoird as his team manager, Steve James has revealed that Fabien has broken his lower Tib and Fibula on his left leg.

Gatedrop would like to wish Fabien a speedy recovery and hope to see him back at the UKAX in 2017!

Steve James had the following to say on his Facebook page:

“Not where we wanted to end up tonight? I think you could say with one thing or another we’ve had the weekend from hell! Absolutely Gutted for Fabien & the whole Team he has broken his lower left leg Tib & fib. It’s been a crazy weekend even though Fabien crashed & didnt finish the final he still leads the championship but unfortunately the Championship is over for Fabien now? Its so hard to take but shit happens & its the part of racing that we all hate but have to accept! When Fabien was laid on the track all the other French Riders was straight there to check on their friend it’s so nice to see they have so much respect for each other the bond those guys have with each other is truly amazing Respect to Ramette #1 Coulon #5 Richier #2 they race hard bar to bar on track but care so much for each other x Flo & Jack getting a double Podium in the main event final tonight with 2nd & 3rd would usually be something to celebrate but it was a different feeling! But I am so proud of Flo & Jack & the whole team for stepping it up they did this for Fabien & the whole team well done guys plus everyone in the pits riders & teams were saddened by this tonight they all like Fabien because he is a class act has a huge following! Thank you to everyone who has sent messages he really appreciates it he’s in some pain but he’s ok he’s just pissed off that the Championship is over for him this year he wanted it so bad we all did but he will be back & we still have to finish the tour on a high we may not be able to take the title but Flo & Jack &the rest of the team will be back in Newcastle to do what we do best & give it our all”