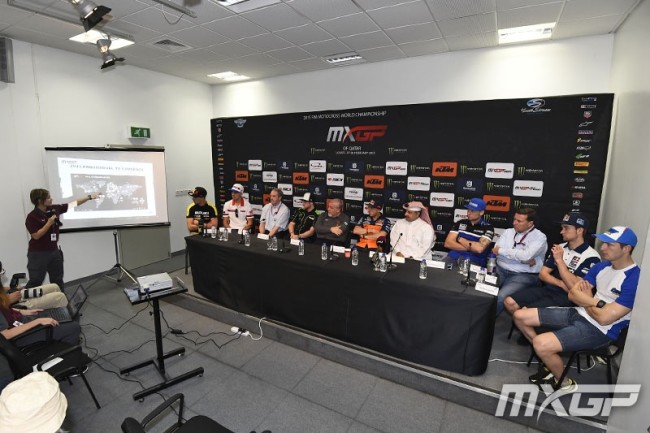 The whole world is watching the most anticipated World Championship season in history and it’s so far, so good for fans and MXGP promoter, Giuseppe Luongo.

So, we decided to speak to Giuseppe to get his take on the first three rounds of a season that features the two of the greatest riders in history going head to head with coverage all around the world, something that was only a dream ten years ago.

We also asked the Youthstream president if we will see more American riders in the world championship, asked why the Thailand track was changed for 2015 and if Lierop will ever get a Grand Prix again.

Read on to find some interesting answers in this exclusive interview with the man who helped get Ryan Villopoto to MXGP and generate such a mouth-watering world championship in 2015.

Gatedrop: Three rounds into a pulsating 2015 MXGP championship so far, how would you sum it up as a promoter?

Giuseppe Luongo: As foreseen everything is going very well; in the MXGP class there are 4 riders very close at the top, the rookie –Febvre- immediately showed his potential and the interest in MXGP is at its highest in the history of the Motocross World Championship.

Giuseppe Luongo: The biggest problem in Thailand was the heat and the humidity, but this is not something new because that’s the climate of Thailand.  Concerning the track, last year’s track was better but the local organizer decided to change the venue due to local subsidies and we could not impose to stay with the old one.

Gatedrop: Ryan Villopoto hasn’t been winning as easily as many expected but he is right there in the championship chase – what are your thoughts on his progress in MXGP?

Giuseppe Luongo: Before the Championship started everyone was excited to see the battle of the history between Cairoli and Villopoto, and that is something in fact we are seeing, but not only, as the unbelievable growth in MXGP was not considered by everyone and there are many other excellent riders.  Since Villopoto announced that he would come to race the MXGP we always said, ‘don’t forget Desalle, Nagl, Paulin and Van Horebeek’ and we see the World Championship unfolding in this way.  The MXGP season is a very long one with many surprises still to come, there are always some riders who are better prepared at the beginning and then there are others who get stronger during the season and are more performant nearer to the end.  The choice to have technical tracks and to let them develop during the race weekend, the choice to have completely different tracks at every venue, the choice to have the European 125 and 250 Championships racing on the same weekend and venue as the MXGP and the choice to stay with the 2 day race format allowing the riders a good amount of time on the circuit make the MXGP the best off-road series in the world and the MXGP riders the best in the world.  On top of that the MXoN show that over the last three years the 9 main MXoN heats were always won by MXGP riders, the last heat victory of a non-MXGP rider was 2011 with the last heat win by Villopoto, again proving the growth in MXGP riders.  To make a long story short we never thought it would be easy for Villopoto, he is a great talent and a very serious and professional rider, he will have the possibilities to win, like the other 4 or 5 riders, but he will have to work very hard for it.

Gatedrop: Having Ryan in the GPs have given the World Championship unprecedented coverage in the USA and the American fans really seem to be enjoying it and the respect for the GP riders have increased a lot. That must be a big step for the championship but is it important to have top US riders racing it from now on to maintain that interest – and the interest of the USA media?

Giuseppe Luongo: Having Ryan in MXGP is fantastic for MX as a whole, not only for MXGP but also for Motocross in America and in the rest of the world; in USA there is always a lot of talk and media coverage around SX and now it’s also about MX, and this is great for everyone. Now the door is open and I believe there will be a continuation of American riders interested in participating in MXGP.  US fans and media have finally found out what MXGP is about and they are starting to love it; I think they will continue to follow it.

Gatedrop: Have you been hearing of more interest from US riders since they have seen the success and prestige of MXGP now? Chad Reed has already mentioned he would be interested in coming back…

Giuseppe Luongo: Yes, there is a big interest.  I cannot tell you the names as it’s too early but we have several very good riders who are interested in taking part in the MXGP.

Gatedrop: I know a lot of fans would love to see Lierop back on the calendar, is there any chance of that track coming back into the championship?

Giuseppe Luongo: Never say ‘never’, but for the moment we already have 2 races in Holland and as we have many requests in other continents we cannot increase the number of events in Holland, so very much will depend on the organization in Valkenswaard and in Assen this year.  The door is never closed.

Gatedrop: Are you any closer to knowing a replacement venue for the Brazilian GP?

Giuseppe Luongo: Yes, we have already a replacement, but we are waiting until the end of the month to announce because we are still trying to find a solution in Brazil.

Gatedrop: The European championship have a huge entry for the first two rounds, it has been a complete success and produces great racing and fantastic talent, did you ever think it would be this popular? It is now the breeding ground for future GP champions and is more important than most National championship events within Europe!

Giuseppe Luongo: This was the plan from the beginning.  Behind the impressive development of the European Championship and the growth of all the riders there is no secret; it’s based on hard work, vision and investment from all partners, the plan was sown some years ago and finally we are beginning to see its fruit.  A pyramid was created with a base of the European 65cc, 85cc, 125cc 2 stroke, 150cc 4 stroke and 250cc 4 stroke Championships, then the 125cc, 150cc and 250cc were included into the GP event programs in Europe so that riders aged between 13 and 18 years would race on the same demanding race tracks to get used to these tracks and conditions in front of the same crowds so that they would be physically and mentally ready to one day compete on a high level on these tracks when they enter into the MX2 class.  The age limit of 23 years in the MX2 class allows mature riders to go to MXGP and leave places in the MX2 class for the European riders who are ready to come up.

Gatedrop: The critics still say you need money to make to GP level and get into a good team, what can you do to lessen that perception and make sure the best riders and not the richest get to MX2 and MXGP?

Giuseppe Luongo: The facts show that the fastest riders are in MXGP and in MX2. As we said above, the qualification to ascend into MX2 and MXGP is via the European Championships where the riders have the chance to show their talent.

Gatedrop: Jeffrey Herlings is still in MX2, do you wish he had moved up to race the Cairoli, Villopoto and the rest of the best in MXGP this season?

Giuseppe Luongo: Sure, I think everyone would like to see Herlings race together with Cairoli, Villopoto, Desalle, Paulin, Nagl, Van Horebeek, Febvre, etc, but this is his and KTM’s choice, and for sure we respect their choice.

Giuseppe Luongo: Yes, the diversity of the venue, of the track, of the climate, makes the World Championship the most difficult and for sure the greatest Motocross Championship in the world and also allows the Grand Prix riders to grow and to be the fastest on every type of track and in every kind of condition.

Gatedrop: The crowd in Argentina was huge and  for a lot of the European rounds crowds are rumoured to be massive as well,  is this the glory days of GP racing with two of the best of their generation going head to head  alongside the rest of the world class competition-can it get any better? The entire world of motocross is tuning in for this season!

Giuseppe Luongo: Sure it’s an extraordinary season but our dream and our work is to continue to try and make it even better, I think we still have a margin to make more events in other important countries around the world, still we have to increase the infrastructure to better welcome the fans, the teams and VIP to events, and based on the European Championships we have to start with other continental championships in Asia, Latin America, Middle East using the same principle as the European Championship so that we see more and more young talented riders coming up into MX2 and then into MXGP from other countries.

Gatedrop: Finally, who do you think will win the MXGP title?!