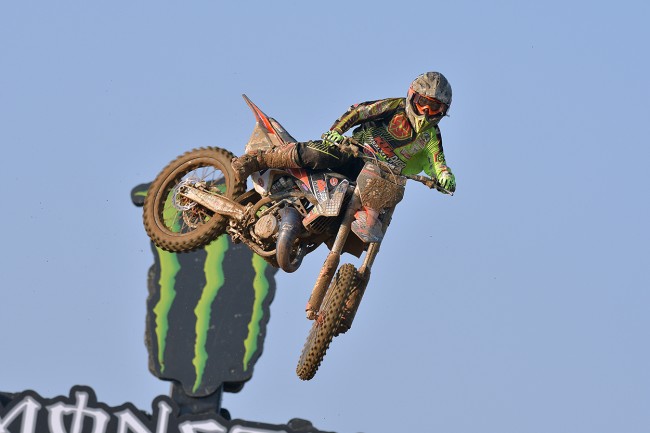 After a rollercoaster injury-marred 2017 that saw the team claim one EMX250 round with Miro Sihvonen and strong international results with Tomas Kohut the Belgian team decided to streamline their organisation. Even though the Dirk Saelen-managed crew maintains a strong focus on developing and guiding talented young motocross riders KTM Diga Junior Racing will support fewer riders than before. Placing the bar higher to concentrate on high potential talent is the next logical step.

Sihvonen, who just turned 19, hit the ground running this year. The fast Finn dominated the opening round of the ADAC Youngster Cup and rode to a podium in Trentino  and an impressive double moto win in Valkenswaard before he injured his shoulder in the ADAC Youngster Cup race of Jauer. Miro has learned a lot from his breakthrough season and aims to come back strong next year! Without a doubt the leading KTM Diga Junior Racing rider should be a strong title contender in the MX2 feeder class.

Two severe pre-season knee injuries knocked Tomas Kohut,18, completely off course. However the affable Slovakian returned strong without standout results in international races and flashes of speed in the few EMX250 rounds he competed in. For 2018 Tomas wants to establish himself as a top-10 regular.

Multi-year signing Emil Weckman, who just happened to turn sixteen today, completes KTM Diga Junior Racing’s lineup. The double EMX150 champion is one of the brightest up and coming riders in Europe. Admittedly the young Finn had a complicated first EMX125 season switching classes and was forced to move from a different team to KTM Diga Junior Racing during the season. The energetic and enthusiastic teenager put his head down and started to make headway near the end of the season when he adapted well to the KTM 125 SX. Weckman eventually might be joined by a second 125 rider as the team considers running a strong second EMX125 contender. Riders who think they have what it takes can reach the team here.

Dirk Saelen, KTM Diga Junior Racing team manager: “We’re thrilled to continue working with three talented young guys who have a great potential. Each of them has had his own challenges this season but we strongly believe in them and every elite athlete has experienced his or her sheer amount of adversity. Especially in motocross that seems to be what fuels any great performance!

“We also know how quickly things can change. This season Miro Sihvonen left Valkenswaard with the red plate and a 20-point lead over the second. In the end Miro finished 11th due to injury. For sure his goal is to fight for the top-three overall. Tomas Kohut was very unlucky in the sense that he couldn’t carry the pre-season momentum with him once he started riding again. We know what he’s capable of and we can’t wait to help bring out the best from his riding. Last but not least we’re very excited to start our longerm partnership with Emil Weckman and his family. Emil already showed us what he’s made of on a few occasions. Not only does he have great skills on the bike Emil is also a fierce competitor who never gives up. I wouldn’t be surprised to see Weckman regularly inside the top-5 next year.

On one hand our riders grab the limelight and we’re really pleased to have Miro (Sihvonen), Emil (Weckman) and Tomas (Kohut) with us again. On the other hand none of this would be possible without the loyal support of our sponsors, volunteers and of course our team staff. Their dedication and commitment speaks volumes about the quality of their work. Perhaps this is my biggest pride in a season where it was tough to reach our sporting goals. Regardless of what happened on track everyone put in a first-class effort. Thank you!”