Everts talks Lommel and the 2016 season 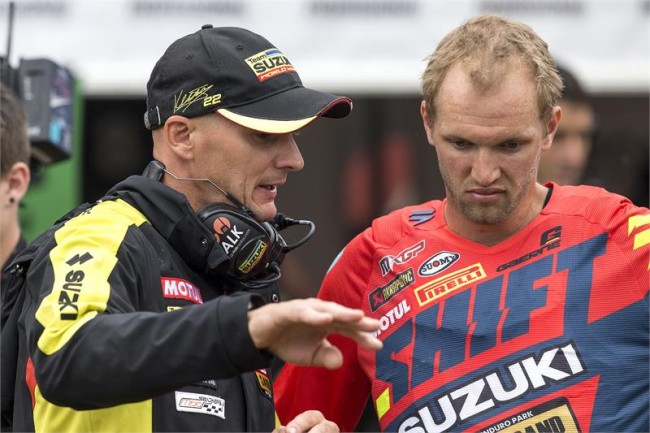 The Grand Prix of Belgium and the 13th round of 2016 MXGP heads into the sand of Lommel for the third year in a row and represents an eagerly anticipated home fixture for Team Suzuki World MXGP with their workshop and HQ mere kilometres away from the venue.

Lommel is revered and feared for the physical and technical demands of the sand, even if the track is well known to most of the Grand Prix collective due to it popularity for training and testing.

For General Manager Stefan Everts and his international crew, this weekend will be a memorable event both for the location, the nationality and the timing of the Grand Prix as the former 10-times World Champion nears almost one year in charge of the Suzuki Factory racing effort. “Of course we are excited for this Grand Prix perhaps more than any other,” he explained while putting the finishing touches to a presentation and surprise the team will host on Friday evening in the paddock. “Lommel has always been a special place and is so close for us and where we do a lot of work. It will be tough for the riders and has always been a place for the specialists, but the whole team is looking forward to going there and we will have something unique to show the fans; something I think they will like to share with their friends and on their social media.”

2016 and the first term of Everts’ stewardship of the Suzuki motocross wing has been through peaks and troughs; Jeremy Seewer is second in the MX2 world championship with eight podium finishes and is currently in the best form of his short career while Bas Vaessen has evolved to the point of being an EMX250 European Championship race winner. In the MXGP class, however, injuries to Ben Townley and Kevin Strijbos means it has been a frustrating time in the category that Everts used to haunt.

“Overall it has been very difficult but on one side it has also been really nice with what Jeremy has achieved so far in MX2 and the amount of progress Bas has made has been something really nice to see,” the Belgian concurred. “In MXGP it hasn’t been so easy, even if in GRP we are learning every day and discovering new things all the time. Our efforts haven’t shone in the results but there has been a lot happening behind the scenes and I’m happy. “

Everts is almost a decade into retirement and since he ripped the last tear-off from his goggles at the end of the 2006 season. The 43-year-old has waded through a deep pool of learning and experience since climbing the other side of a Grand Prix fence; from a team co-ordinator, tester, pioneer of fresh racing technology, rider coach and mentor; and now Team Manager and much more in yellow colours.

“I knew it wouldn’t be easy and the really good times might be months or even a year away but I took this challenge and I gave myself time to get things under control,” he reveals. “I’m not in a super-rush and didn’t ever expect to be going for the world championship in our first season; I think that level is something we have to build up to. Each season is long and it has been a tough time but we are pushing though; it is hard to have patience sometimes!

“Going through all those different periods has been nice and a real spread of things to do and to learn,” he continues. “I’m in good health and so is my family, so what more could you wish for? I still love racing and still enjoy coming to grands prix. I have a good feeling when I look back in the past; motocross is our passion.”

Everts can be frequently spotted around a Grand Prix circuit and the Suzuki trucks, awnings and impressive hospitality unit with wife Kelly, two children and father Harry in tow. His work at Suzuki means a real family effort as everybody pitches in. The record holder for wins and titles also is also trim and still looks like he could put a 450 through its paces at GP speed. How much is the yellow ’72’ turning wheels in anger?

“I don’t ride enough!” he admits. “Or that I have enough time! When I’m not on a bike then I still like to go to the track and watch and offer some words of advice to the guys. I find just being there sometimes is important. I was testing for two days after Mantova [Grand Prix of Lombardia and round 11 of MXGP] and my riding was good; my technique was still there and I had the feeling again of when I was racing. I enjoyed those two days. However, I’m past forty now and I’m starting to feel that!”

With Strijbos set for just his second Grand Prix since returning from a problematic left wrist and Arminas Jasikonis braced for his second appearance on the RM-Z450, the odds are long for Suzuki toasting victory at Lommel. The squad will, however, have high hopes for Seewer once more with the Swiss defending a sizeable gap over third place in the MX2 standings and Vaessen will bring his sand acumen to the fore: 2016 might not be the year for Everts and co to uncork champagne in pursuit of that elusive first triumph but with the winning mentality such a part of his fabric, it won’t be long before the champion gets that particular juice flowing again.

“Every victory has a different feeling,” he says. “Sometimes you have wins that feel unbelievably good and some others where you know you weren’t riding well. For me it has been quite a while since I had that feeling with a rider. When we manage the first one here it is going to be really special, a relief and something that brings a lot of emotion. I hope for it and I dream about it. Perhaps it seems far at the moment, but then it can also be just around the corner and that’s one of the great things about all and any sport and racing; I always say things change very quickly in ice hockey but also in motocross!”

The weather forecast for the weekend predicts warm temperatures but also showers.