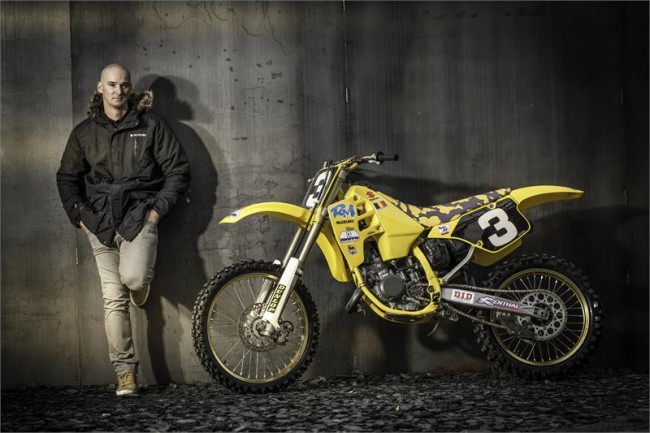 Almost a quarter of a century since they were last World Champions together Stefan Everts and Suzuki are once again collaborating to powerful effect as the sport’s most successful Grand Prix rider is now in control of the Suzuki World MXGP team and organisation.

Everts, 42 years old, has assumed the role of Team Principal after reaching an agreement with Geboers Racing Promotions’ Sylvain Geboers and the two Belgians will now steer Suzuki’s factory programme in the FIM MXGP Motocross World Championship with the RM-Z450 as well as the MX2 category and EMX250 European Championship (RM-Z250). Everts will be accompanied in the Lommel-based set-up with assistance from father (and another former Suzuki World Champion) Harry and will not only oversee racing operations involving a skilled and dedicated crew and six riders but also contribute to the development of Suzuki’s RM-Z technology. Everts will heavily promote the Suzuki name at the highest level of the sport and where the team have been championship contenders since the beginning of the century with the RM250 and the RM-Z450 from 2004.

Everts retired in 2006 with his 10th crown and a record 101 Grand Prix victories. He has since marshalled another manufacturer to world championship success, developed key motorcycle models and evolved junior racing talent with notable spoils. He is now ready to ally with Geboers after winning the first of his titles back in 1991 in ‘yellow’.

“It is a very big challenge and a big responsibility…but actually I think I am ready for it,” ‘#72’ commented. “I have the age and the knowledge. I have been retired for nine years and thanks to my former job I was able to build up some experience on the other side of the fence. I feel ready!

“I love this sport so much and I love to travel and be at the races,” he added. “I love finding new talent. I want success with this team. A lot of things need to change, to move and be pushed forward. I’d like to create a really strong team image. On the multimedia side we can work harder and expand our profile more. The interaction with the fans is important.”

Of his initial link to Suzuki while still a teenager and under the watchful gaze of father Harry he said: “They were my first love. Sylvain is the one who got me into Suzuki. That was where it all started for me. Those were some great years and I respected what Sylvain and Suzuki gave me.”

Geboers, a Suzuki stalwart across the decades and a name synonymous with the brand, is now into his seventies and will stay in place to assist with the transition and offering advice to Everts as GRP enters a new era. “What we have now is a good opportunity for GRP, Suzuki and Stefan,” he commented. “I think he can be a huge help to riders and knows what it takes to win and become champion. A few years ago we, as Suzuki, lost Roger [De Coster] and therefore a lot of our power. I believe this is now coming back through Stefan and all the experience he has.”

Suzuki World MXGP will attack the 2016 FIM Motocross World Championship with Kevin Strijbos and Ben Townley in the MXGP division. Jeremy Seewer and Brian Hsu will gun the RM-Z250 in MX2 while Bas Vaessen will enter the EMX250 European Championship.