Even Tomac doesn’t know what is going on in moto one! 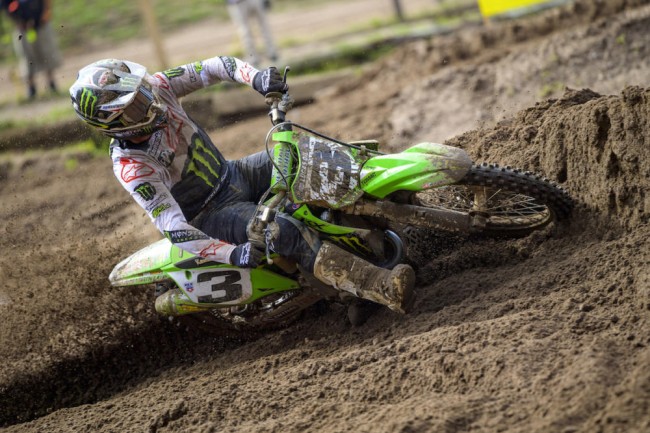 Even the man himself, Eli Tomac, is at a loss as to why his second motos are so much better than his first moto performances in the last three US outdoor rounds! The factory Kawasaki rider blitzed the opposition in race two at Southwick but in contrast, could only manage eighth in race one and despite moving into third in the championship thanks to Aaron Plessinger’s DNF, he is still 57 points back of Dylan Ferrandis as the series hits the halfway point at Millville tomorrow.

And Eli admitted in the press conference he isn’t sure what the answer is: “The second moto has been great. I look back at the last three weeks and I’m just like, “What’s going on in moto one?” I haven’t totally figured it out yet, other than maybe it’s a little bit of start position for the past two weeks. But this week there was no excuse. I started almost in the same spot in moto two and was able to come through people. So, I don’t know. I made a little bike change between one and two today, but I don’t know if it really did all that. Got to figure something out. At least I’m getting one of those wins in there. The way I’ve been riding the second moto, I’m like, dang, I want that overall but moto one is not cutting it. Got to figure it out.”

”My routine at home is the same. Nothing has changed riding-wise, training-wise. I’ve always done the same thing. But maybe that is something there. Like I said, nothing has changed. I can still get all the work in. Family time is great. If anything, it makes me more motivated as a racer. I’m just trying to figure out moto one. It seems like I’m always a little bit farther back on the start and then I just get stuck behind guys a little bit longer than moto two. That’s the only thing I can nail it down to right now.

“We weren’t far off. It was literally clickers between one and two. That was it. Like I was thinking about earlier, moto one, to me it was a little more one-lined. Maybe it wasn’t, but in my opinion it was  hard to get through guys and the roost was sticking to my goggles worse and that sort of thing. That was what happened today. That’s just how it goes.”

And Tomac says he isn’t thinking about the championship yet, “I’ll feel like I’m in it if I’m within a moto’s worth of points, or even if it was down to 30. 50 is a ways out. Basically at that point you’re just going for broke, going for everything. That’s not anywhere in the mindset. It’s like figure out moto one and try to get an overall first.”

Listen on iTunes here or Spotify or YouTube below and don’t forget to follow/subscribe: