Evans on his second GP podium of the season 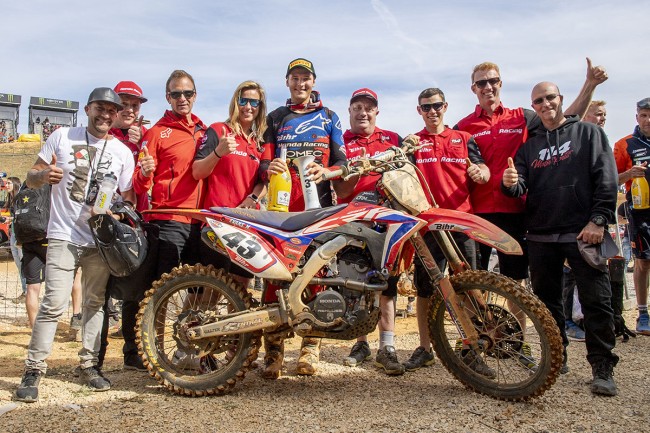 The Honda 114 Motorsports squad were at full-strength again at the sixth round of the 2019 FIM Motocross World Championship, as Zachary Pichon joined Mitchell Evans at the Portuguese Grand Prix. The pair were eager to jump onto the circuit, which is widely considered one of the best on the schedule, as the sun was beating down on the red soil of Agueda in the hours prior to the first session of the weekend.

Mitchell Evans immediately gelled with the Portuguese circuit, as he recorded a rather strong fourth in the qualifying heat on Saturday and nabbed a superb position on the starting line for the points-paying motos. Evans put that to good use in the first encounter at midday on Sunday, as he used the power in his CRF250R to rocket out of the gate and end lap one in fifth. It was immediately clear that he had the speed to contend for a position on the box, but the one-lined track made it tricky for him to move forward. Fourth was where he ultimately finished, which set him up well heading into the final encounter.

Although Mitchell Evans was already having a successful weekend, he reached new heights in race two. An incredible start put Evans in the top five, which was positive, and then he made quick progress and claimed the lead exiting turn three! Evans led for five laps, before losing a spot to the reigning world champion, but still kept things close in the laps that followed. A third in that second moto left him in the same position in the overall classification, therefore securing his second trip onto the podium in his short MX2 career. Evans now runs sixth in the current standings.

Zachary Pichon returned from the foot injury that sidelined him at the previous round to add points to his total. A crash on lap one of the first moto left him in an impossible spot, as he had to battle up from thirty-fourth and ultimately missed out on points. The second moto following a similar pattern, unfortunately, as he was left with work to do after a poor start and did not secure any points. Thirty-second is the where he runs in the championship standings.

The Honda 114 Motorsports team will now turn their attention to the Grand Prix of France, one of the biggest races of the season, which will be run next weekend. That will mark round seven of eighteen in the 2019 FIM Motocross World Championship.

Mitchell Evans: “The podium in Argentina did not quite sink in and I probably did not appreciate it as much as I appreciate this one, just from having a few tough weekends. We are finally getting back on top of the injuries and picking up my fitness again. I am feeling good. Starts are getting a lot better too, which is helping a lot. All smiles in this camp. We know what we need to work on and we are looking to just keep progressing throughout the year.”

Zachary Pichon: “It has been a rough weekend. Three starts and three crashes, which was not the best way to start every race. I still had a lot a fun on the bike and it was good to be back racing. My heel is feeling better, so I cannot wait to bounce back in France next weekend.”

Livia Lancelot (Team Manager): “It was a great weekend. I always really loved Agueda as a rider and I now I got to enjoy it as a manager too! Mitch did great the whole weekend and right from the first practice we saw that he was strong and confident. He had good starts and a good rhythm! It is the first time that he has had the pace to fight up front with [Jorge] Prado and [Thomas] Olsen. It is good to be back on the box! I am sad for Zach, because he was riding really well and was unfortunately involved in every crash on the start. It was really hard to come back on a track like Agueda, as it was really fast. Everyone was more or less the same speed. Now we are all focussed on next weekend for our home MXGP in France.