Europe’s best head to Arenacross in 2017! 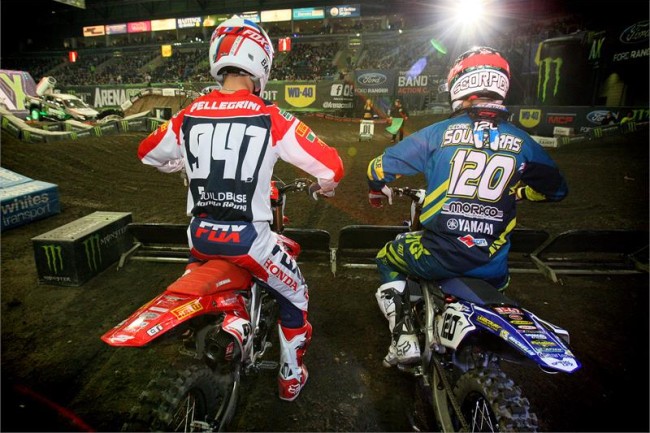 Race FX, the firm behind high-end products such as Bell, Seven and RFX to name but a few, has joined forces with St Blazey MX, the south west’s leading off-road dealership, to field an exciting new team in the 2017 Arenacross series.

RFX powered by St Blazey will enter the fray with none other than the, sometimes controversial but always quick, 2016 Pro class runner-up Cedric Soubeyras, and the equally talented Italian Angelo Pellegrini. Joining the Pros will be gutsy Pro Lite rider George Clarke, who impressed everyone with his never-give-up attitude earlier this year, particularly at the last round when a badly gashed elbow didn’t deter him from lining up with the Pros in the Last Chance Qualifier.

Commenting on this new initiative, Race FX boss Paul Irwin said; “As a company, we’re passionate about racing and are keen to support good racing. Arenacross is arguably the best racing you’ll see and so we view having hands-on involvement with a team as a good fit for us. This is our first time fielding a team and to have two top-class international racers on the books is a very exciting prospect. It will be interesting to work with them and I’m sure there will be fireworks.”

Lining up as team-manager, alongside Rob Stringer as head mechanic, is St Blazey boss Steve Annear. Having been involved from the start, he’s no stranger to AX and the dealership will continue to support MVR-D Husqvarna as well as the new Suzuki-mounted team. “It’s going to be a busy time as we will be working closely with our team riders to give them the tools to go out and do the job and we’ll also help out MVR-D. We have a long-standing relationship with the Chamberlain family who run MVR-D. It’s fair to say that indoor racing is in our blood as my dad, and Mark’s (Chamberlain) dad, ran one of the first indoor race events back in 1981 at a stadium in Cornwall.”

There are big changes on the MVR-D front too as popular Brit Kristian Whatley will spearhead the firm’s 2017 racing activities aboard Husqvarna machinery. The 2013 British motocross champion finished fifth in the 2014 Arenacross series and says he’s excited about the prospect of returning to the challenging AX circuit. “This is the start of a new chapter for me and one I’m itching to get underway. I’m hungry for another British title and am confident MVR-D will give me the support necessary to just go out and concentrate on racing.”

Whatley will race the Husky in the UK Arenacross championship.

MVR-D’s Gareth Chamberlain added; “We’ve done AX on and off since the start but it now represents a major part of our season and we’ll approach it accordingly. We have Kristian signed for next year and he will be doing the AX series for us as well as the full outdoor season. He has come off the back of a disappointing year and is highly motivated to show everyone what he is truly capable of which is exciting for us. Harri Kullas, who showed some great speed at times last year, has had to undergo a routine knee op which rules him out this year. This means our second rider is not yet confirmed but will be highly competitive and we hope to have it tied up by the end of the week.

“The racing at AX is unbelievably tight, you have an off night and you won’t make the final, get a good start and everything clicks you find yourself at the sharp end. We aim to be at the sharp end, it’s intense but that’s what makes it so much fun.”