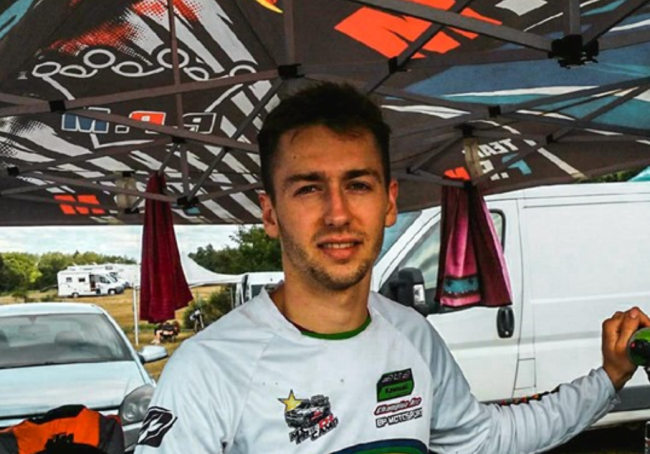 Very sad news came from France over the weekend as twenty three year old, Boris Prudhomme sadly passed away after crashing at the Supercross of La bosse de Bretagne.

Boris’ father, Eric has wrote an emotional statement on social media which we’ve translated below.

“I’m Boris’s dad.
I wanted to tell you what I had in my heart after the death of my son during the supercross of La bosse de Bretagne last weekend.
Currently Boris is the only dead driver at the place of a competition since Supercross exists worldwide.
There’s already been a lot of injured riders but it stopped there.
Boris died on the move following his crash, I hope he didn’t suffer.
A person sent me a video of his crash, of these last moments of life on earth, for me it was unbearable.
But I had to understand, I’ve watched it hundreds of times to end up understanding how he died.
There are 2 things that I do not accept in this fatal accident the way this is passing and the behaviour of the organizer.
For his accident, Boris is missed on the beginning of a routine is to try to correct his mistake by staying the longest possible on his bike then he lay on the ground on the side without wanting to drop the handlebars, the speed is not excessive the fall.
It meant he couldn’t have hit his bike and leave like he has already done hundreds of times.
Except it was just after the departure he was 5th in the race and that right behind him there were dozens of riders coming.
Two riders hit him on the ground, which caused his death. 1 rider that him but did all they could to avoid him, that is normal.
The second pilot on the other hand I don’t agree he did the same thing, he rode on his body but by remaining on the gas without any action to avoid him in order to stay in place of his race.
All supercross riders are professionals but the sport must remain a leisure and a passion. They must not do whatever it takes in order to win [in the sense when life is in danger].
This wont bring back my son but if this open letter can make things change and change mindset then i do it without thinking about the consequences.
A dirtbike is a weapon on a Supercross track and the right thing to do is to protect your and others life. Your position on the track is nothing in comparison to the choice of life and death.
When to the organizer without emotion and without any compassion in front of the rescue watching to get the race back while he knew it was really serious and fatal for my son, now that’s not normal. I’m sorry why not have stop the competition out of respect for Boris.
Yes, I am shocked by the circumstances of his death because this could have been avoided, a rider has to do everything to avoid a rider on the ground that is a normal action.
Yes, I am shocked by the slight way of the reaction of the organizer, because the life of a human must be stronger than a show,
We are more at the time of the gladiators in a arena.
For the rest when I see the comment of a great french driver like Adrien Lopez with these 15 years of high-level supercross that says that the Supercross of La bosse de Bretagne is “too dangerous”, it doesn’t reassure me for the future of this sport.
If the behaviour and the mindset of this sport can change in memory for my son.
My Son’s funeral will be held on Thursday start of the ceremony 14 pm.

Sorry for the spelling but I didn’t go to the big schools”.