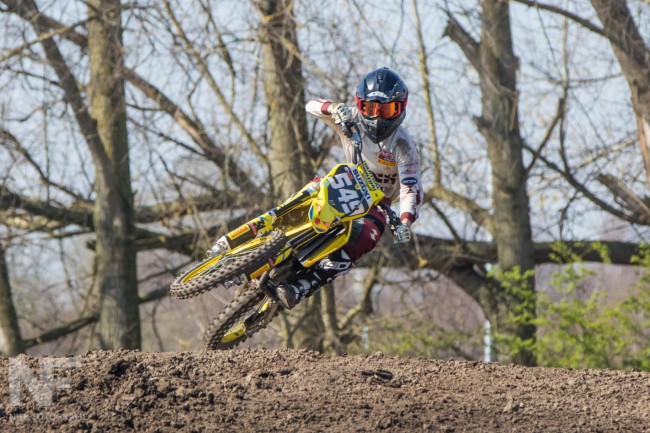 Championships will be won and lost this weekend during the MXGP of Loket as a lot of hungry kids will be competing in the EMX65 and EMX85 classes. It’s a good chance to see the next generation in action and start predicting the future world champions.  It’s also a great chance for the kids to race during the same weekend as the best riders in the world.

Last year Rene Hofer dominated the EMX85 class on his quest to becoming champion, someone is about to follow in the Austrian’s footsteps. This year it could be a lot closer as there’s no real clear favourite coming into the event.

However, if you had to pick one rider with a very good chance of winning the title then you’d probably put your money on Jett Lawrence. Jett made the move to Europe last year along with his brother, Hunter and has been showing everyone he can ride a bike too. He has been winning quite a lot this year on his Factory Suzuki and will come into the event confident so don’t be surprised to seeing him crowned champion this weekend.

Another rider that has a good chance of getting the job done this weekend is Kay De Wolf. He has been somewhat of a revelation this year on his Beursfoon KTM. At the start of the year Lawrence was beating him more often than not but De Wolf has stepped up his game and give him a run for his money.

De wolf competed in the event last year but had a DNF and a fourteenth spot in the second moto. I would be surprised if he doesn’t make the podium this weekend however, being a Dutchie he might not be quite as fast or as comfortable in the hard pack conditions at Loket.

Another Kay to look out for is Kay Karssemakers, this kid was sensational on a 65cc and is starting to find his feet on the 85cc. He’s spent most the season chasing down Lawrence and De Wolf but with a good start anything is possible so don’t rule him out. Last year he finished 16-25 in the moto’s as a rookie but he will be much strong this year, make no mistake about that.

The ADAC German Junior Cup has a lot of talent in it and Max Palsson currently leads that series. He has won one moto so far but has been very consistent and that’s why he finds himself leading the series.  The young Swede is capable of riding at the very front on his day so look out for him.

His team mate, Magnus Smith is another one to look out for as he has speed. The MEFO Sport rider has actually won more than Palsson as he has two moto wins to his name but just hasn’t been as consistent. He only sits thirteen points behind Palsson in the series and perhaps his raw speed is slightly better which could give him a slight edge over his team mate as the EMX85 series will be decided over two moto’s this weekend.

Danish youngster, Rasmus Pedersen is also one worth keeping an eye on. His results are a bit up and down but when he’s having a good day he can certainly run and challenge the best of his age group.

The 2015 EMX65 Champ, Scott Smulders is a bit of a dark horse heading into this weekend. He has got the experience of winning a title before so that could play into his hands as well.  However, he didn’t compete at the EMX85 series last year so this will be the first for him on the 85cc and as he’s Dutch he prefers the deep sand.

One rider to keep an eye on in future is Dave Kooiker. He is just eleven years old but usually finds himself in the top five during the 85cc KNMV ONK Dutch races.  He probably won’t challenge for the title this weekend but a top ten isn’t out of the question. He possibly has the most potential out of all the kids.

Last year Lewis Hall impressed for the Brit’s and this year Eddie Wade will be hoping to do the same. The Brit bases himself in Spain and has been impressive this year so far. If he gets a good start a top five overall is most definitely possible which would be a great result.

Swedish kid, Noel Nilsson could be one to keep an eye on. He competed last year and showed us a glimpse of what he could do finishing a strong fifteenth in the second moto. He will be hoping for better this weekend though as he’s much stronger and in better shape a year later.

Another very talented rider is Adam Zsolt Kovacs who comes from Hungary. At times he has been battling for top three positions in the ADAC Junior Cup. He only sits tenth in the series but that’s mainly due to three DNF’s. Without the DNF’s he would be battling for the top five. He has the speed to run in the top ten this weekend at the very least.

Last year Loket was very special for Edvards Bidzans as the Latvian won the EMX65 series. This is his rookie year on the 85cc so it’s a learning year for him. He will be looking to learn as much as possible this year but the future is very bright from him. He will look to follow in Pauls Jonass’ footsteps in becoming a top GP rider.

BUD Kawasaki have young Spanish kid, David Braceras Martinez in their ranks and he could be one to cause a surprise. You don’t get a ride with BUD unless you show some sort of talent. He could be the next big Spanish talent after Jorge Prado.

Also worth a mention is French youngster, Florian Miot. He is highly rated in France and they have high hopes for him. A good result in Loket might just kick start his career.

In the EMX65 series, Ivano Van Erp comes into the event as heavy favourite to lift the title. You might remember Van Erp competing in the EMX65 series at Loket last year. The Dutch talent won the first moto of the day and it looked like he’d grab the title but a DNF in the second moto ruined any chances he had. However, he’s looking to set the record straight this year and grab the title. Van Erp only lost one moto during the qualifying races so it really will be an upset if he loses the title this year.

There are a few young talents from Denmark to keep an eye on.  Mads Fredsoe is in good form and managed to beat Van Erp once this year to stop his unbeaten run. Fredsoe is strong in the hard pack so if he can take a good start then you just never know. Fredsoe just missed out on the podium last year but actually finished second in the first moto, he will be hoping for at least a podium this weekend.

The other Danish talent worth keeping an eye on is Nicolai Skovbjerg. He finished third overall in the NW qualifying races so he will want to get on the box this weekend. It’s not impossible for two Danish riders to get on the podium!

Another young Dutch talent is Damien Knuiman. He’s a solid rider and could be good in the future with the right guidance. If he can end up in the top five this weekend that would be a superb result.

Belgian talent, Sacha Coenen is one rider that could cause an upset if he’s in the mood. He battled quite a lot with Fredsoe this year but had a few bad days which meant he only ended up fifth after the qualifying races. If he can bring his A game to Loket he could be right at the front though.

Kovacs isn’t the only fast Hungarian coming through the ranks as Noel Zanocz could be one to watch on his Husqvarna. He finished eleventh at Loket last year but will be looking to improve on that result this year.

Young Latvian, Karlis Alberts Reisulis was also in action at the event last year and he finished an impressive sixth overall. A year later and he’s much stronger so if he can bring good starts then a podium isn’t totally out of the question.

The Czech fans can get behind their home rider, Matej Skorepa as he could surprise with some good results and the home crowd getting behind him. Unfortunately, he has been injured so has only been back on the bike for one week but here’s hoping he can ride to his true potential.

The winner of the NE zone was Polish kid, Maksymilian Chwalik. He has won plenty of moto’s this year so will hope to bring that confidence to Loket with him. With the two zone’s together it will be much harder for him to win but a good result is most definitely possible.

One thing for sure it’s set to be good racing between the new generation this weekend. We can’t wait to find out the two youngsters who are about to be crowned champions!