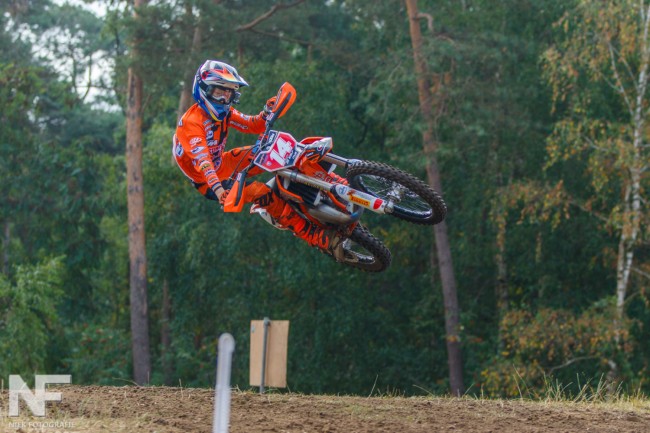 The young generation of tomorrow have a big weekend ahead of them with the EMX finals taking place this weekend, a lot of anxious kids will want their hands on the title!

De Wolf has spent most of the season battling with another Kay, in the form of Kay Karssemakers. The young Dutch rider was pretty much unbeatable on the 65cc but hasn’t got it all his own way on the 85cc mostly due to de Wolf but despite missing out on the Dutch title he’ll want to get one over on de Wolf this weekend by grabbing European glory.

Another Dutch youngster to watch out for is Dave Kooiker, at the moment he’s just a little bit off the two Kay’s but he’s a year younger so in the long run he might catch up with them. Kooiker has also just recently got his hands on the 2019 Yamaha which is thought to be much better than the 2018 model.

Kay de Wolf’s team mate is also pretty good – Scott Smulders is particularly good at putting in one fast lap during timed qualifying. Smulders has really improved since the 2017 season and has been one of the most improved riders. Smulders is also good in the hard pack, in fact even though he’s Dutch he prefers the hard pack so this weekend it might just all click for him.

Cas Valk is another Dutch rider to look out for, it’s his first year on the 85cc but he’s been pretty good considering that’s the case. This year he’ll learn as much as possible from the event but he could be a future winner if everything goes to plan.

Stefan Everts has ten world titles to his name and this year he’s been pushing his son, Liam Everts and he’s really stepped up this year. Everts has competed quite a lot in the sand of Holland this year as well as the hard pack tracks in Germany. He’s been quite smart and prepared himself well for Loket, he could definitely win this weekend if it clicks for him on the day. Everts sits second in the 85cc German Championship after four rounds but has won two moto’s so don’t be surprised if he wins this weekend.

South Africa have another talent coming through the ranks in the form of Camden Mc Lellan. The Kosak KTM rider currently leads the ADAC German 85cc series as he has a 9 points gap. This weekend is a big one and one that matters, Mc Lellan could have all the answers to win the European title.

There’s also a young German to look out for with Constantin Piller having a good season, he sits third in the German championship but in truth there’s not much to separate the top three. Piller has won three moto’s so actually won one more moto than Everts but hasn’t been as consistent. The one-day format might suit the young German if he can get good starts.

Young Czech rider, Radek Vetrovsky is another one to keep tabs on, he sits fourth in the German championship despite missing a round of the series. Vetrovsky is under the watchful eye of the JD Gunnex KTM team and they’ll be hoping he shines this weekend. His team mate, Tomas Pikart is also one to watch out for.

Someone who knows what it takes to win an EMX title is, Edvards Bidzans as he won the EMX65 championship in 2016. He’s still trying to get to grips with the 85cc but he’ll be hoping to learn plenty this weekend.

In the SE zone, it was Patrik Ujcic from Croatia that won the championship, he’ll be hoping to bang bars with the best youngsters in Europe this weekend. Ujcic just edged out Luke Kunic for that title – Bence Pergel is also one to watch out for, he didn’t contest all the rounds but could have won the title if he did.

In the NE zone, Aleksey Orlov edged out young Spaniard, Romeo Karu for the title. Both of them will want to be competitive in Loket for the final.

In the EMX65, there’s a highly rated girl to look out for. Ten-year-old, Lotte van Drunen is highly rated and it’s to no surprise, she’s been beating the younger males on a regular basis this year. One girl will go up against 39 guys this weekend and one thing for sure is she could have a great future ahead of her!

Last year, Damian Knuiman finished second overall in the EMX65 Championship and will be looking to go one better this weekend. Knuiman has rode a Yamaha all season but parted with his team this week so we will have to see what bike he turns up on this weekend.

Another Dutch talent to look out for is Bradley Mesters who’s highly rated, he should be at the sharp end on his Husqvarna.

In the NE zone, Janis Martins Reisulis won the title, he’ll be looking to follow in his country man’s footsteps, Mads Fredsøe Sørensen as he won the EMX65 title last year. Lithuanian Adomaitis Marius is another to look out for as he edged out Spaniard, Pikand Romeo for second.

In the SE zone it was Romanian talent, Zoltan Ordog who was pretty dominate so he’ll want to have a successful weekend in Loket.