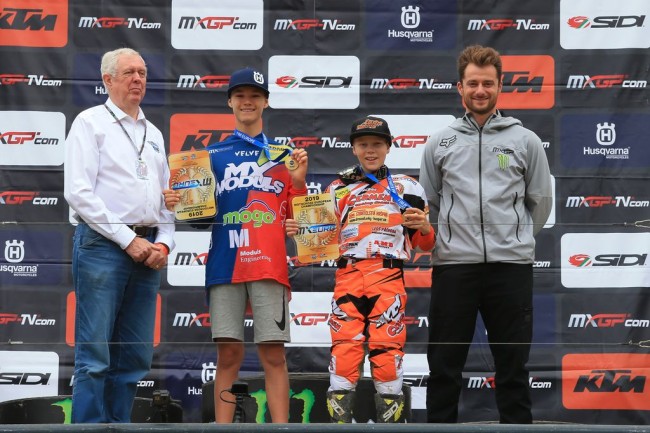 The hillside circuit of Loket witnessed the future of motocross in action as the Finals of the European Championships EMX65 and EMX85 were held together with the premiere classes.

The opening EMX85 race saw a great performance from Latvian Edvards Bidzans as the he did not have a good start but could manage to be in fourth position in lap one and worked his way through the field to move into first place on lap three and controlled the race from there, winning ahead of Quentin Marc Prugnieres and Marchetti Racing KTM’s Valerio Lata.

For Prugnieres, who led the race on the first lap had to settle for second after being passed by Bidzans early and rode a steady race for second. The 2019 85cc Junior World Champion Valerio Lata also rode an incredible race from his third position. After starting in around 15th position moved into 12th on lap one, then slowly passed a bunch of riders to move into third place on the final lap of the race.

When the gate dropped for early in the morning today it was the French Maxime Grau who took the early lead in the second EMX85 race from Prugnieres, and Latvian Alberts Karlis Reisulis. After a lap the lead by Grau was nearly three seconds. Valerio Lata moved into third place on lap two when he passed Reisulis, on lap three the lead was three seconds, but it was Lata in second place as he also moved past Prugnieres. KTM held the top four places on lap three, with Grau, Lata, Prugnieres and Reisulis.

Race 1 winner Bidzans moved into third place on lap five while Prugnieres dropped another place as he went back to fourth place. 85cc Junior World Champion Valerio Lata was on fire as he moved right up on Grau for the lead.

Lata moved into the lead and Bidzans also moved past early leader Prugnieres to relegate the French youngster to third place. Lata won the race by three seconds to Bidzans, but it was second overall Bidzans who was crowned champion. Third was Prugnieres, fourth Reisulis and fifth Grau.

Young Latvian rider Edvards Bidzans has won the 2019 EMX85 championship today in Loket after going 1-2 and scoring 47 points. Bidzans who was crowned 2016 EMX65 champion is now a two-time European champion at the age of 14. Second overall was the 2019 World Junior 85cc champion Marchetti Racing KTM’sValerio Lata with 3-1 scores and 45 points, while third placed was Quentin Marc Prugnieres 2-3 and 42 points

Edvards Bidzans: “I am really happy about the weekend. I can’t express what I am feeling. I won the first race and I didn’t have a good start in the second one, but I passed nearly everyone in the first corner, and then I passed for second and I knew that was enough to win it, because Lata was third in the first race. The weekend has been perfect. The starts were not great, but I was able to win it.”

In the opening EMX65 race it was local hero Vitezslav Marek who held the early lead ahead of Marius Adomaitis, Anton Isaksson, and Joel Canadas. Nobody was going to stop Marek as he never gave up his lead, topping every single lap of the race. In second Adomaitis did pretty much the same thing, holding second all race long, but in third Semen Rybakov just had to pass Isaksson to get his third-place finish.

Marek was in a class of his own as he extended the lead to 10 seconds on lap two, while Van Drunen showed amazing speed in fourth place, and Adomaitis dropped into sixth place on lap two, then into fifth when he passed Gregor Kuusk.

Rybakov was also pushing through the field after an early crash, as he came from well back in the pack to move into seventh place on lap four. Van Drunen moved into third place as the Dutch girl proved more than a match for the boys.

Marek was just cruising up front with a 16 second lead as the race got close to its completion. Adomaitis was all over Van Drunen for third place, he moved into third place and soon after Van Drunen was relegated to fifth as Rybakov also moved past the Netherlander. Marek won it from Martinelli and Adomaitis.

No one had an impressive riding as Local hero and 65cc World Cup winner Vitezslav Marek did, he has put the Loket crowd into a frenzy as he added the EMX65 championship to his trophy cabinet with a very dominant 1-1 performance. Second overall was Marius Adomaitis with 2-3 scores and third place Semen Rybakov with 3-4 scores.

Vitezslav Marek: “I am very happy about my racing, it was a very good weekend, thanks to my sponsors, my family and my fans.”