EMX250: Who impressed in Germany? 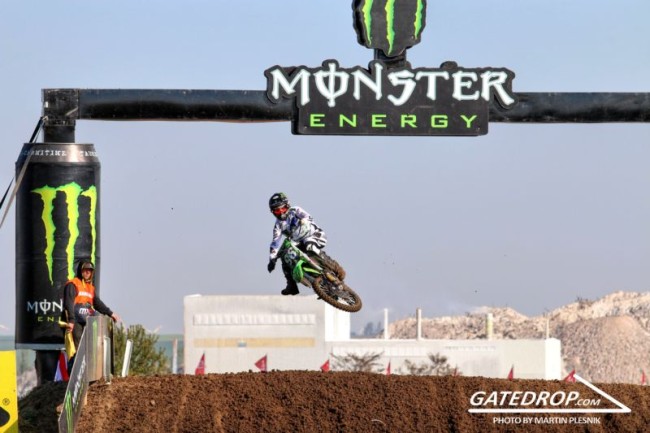 Germany, Teutschenthal held the third round of the EMX250 championship. After trips to Holland and Latvia for the first two rounds it was nice time for the riders to face the hard pack conditions.

It was a perfect weekend for Hunter Lawrence. The Aussie started the weekend in good form by going quickest in his group during timed practice. He then won both the moto’s and simply dominated during the course of the weekend.  In the first moto he got the hole-shot, Thomas Kjer caught him but Hunter responded and pulled away. He ended up winning the first moto by fifteen seconds. In the second moto, Sanayei got the hole-shot but Hunter didn’t panic and made his move for the lead at around the half way mark of the moto and had a ten second gap at the end of the moto.  Hunter is now twelve points behind the championship leader as he builds up his momentum in the run for the title.

Consistency is what gets you titles and Thomas Kjer Olsen is being consistent so far this year. Thomas has always had the speed to win moto’s but consistency has always let him down. This year is bringing better things for the Danish rider, he went 2-3 for second overall. Thomas admitted after the second moto that Hunter was too good for him in Germany but it was good that he realised this and settle for good points for the championship. With only twelve points in the championship race it is hotting up to be a good battle. There is one thing for sure, Thomas really wants this EMX250 championship before moving up to the MX2 class.

He is yet to put two really good moto’s together but things are clicking into place for Darian Sanayei. He didn’t have the best of starts in the first moto but made a few passes and ended up in sixth at the chequered flag. The second moto was much better for the American, he got the hole-shot and led half of the moto eventually finishing up in second.  A strong second moto and that is his second podium on the bounce – things are going good for the American at the moment!

One rider who really stepped up this weekend is Anton Gole. He has plenty of EMX experience as he competed in the series last year but didn’t have great results. Anton ended up in twenty-eighth in the championship last year with a best result of a fifteenth in the moto. The Swedish rider switched from a Honda to a Husqvarna machine for this year and looks to have gelled with it.  He got a good start in the first moto and manage to cross the line in a fantastic third position, what a ride! The second moto didn’t go so well as he finished twelfth but he ended up fifth overall. I am sure he is well pleased with that and it should give him plenty of confidence.

One rider who has been very consistent in the EMX250 class this year is Kevin Wouts.  The Belgian finished fifth and fourth in the moto’s for fourth overall. He is third in the championship with just three points over Sanayei. Kevin has been very solid so far this season but I am sure he is capable of a win if it all clicks together!