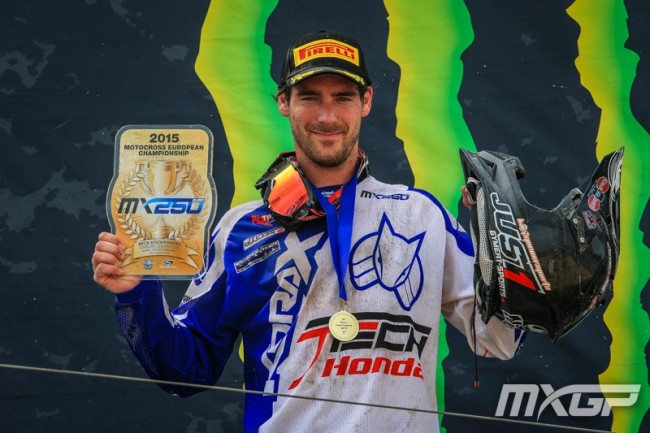 The first round of the 2016 EMX250 Championship kicks off on Sunday at Valkenswaard. A lot of new riders will race the class this year. Romain Febvre is an ex EMX250 championship, with plenty of fast kids in this class who can step in his footsteps by winning the title and then moving onto bigger and better things in the World Championship? We will discuss who to look out for during the course of the 2016 season!

No better place to start than with last year’s championship winner, Nick Kouwenberg. Everything is the same for Nick this year, same team as he stays with JTech Honda and the same goal to regain the championship. Nick might not be the fastest rider in the class but he has the experience and that could help him massively in the championship race. Nick is strong in the sandy conditions so shouldn’t be too far away from the front at Valkenswaard. Last year he ended up eighth overall after a problem in the second moto so he will be looking to improve on that result this year!

With Valkenswaard being sand, who else should be expect to see at the front?

Well, Bas Vaessen is strong in the sand and showed that during the 2015 season. He has prepared well for the season and did well in the first Dutch championship of the year, he ended up fifth overall and the best EMX250 guy competing at that race. Bas will certainly be near the front at the sand races however, he needs to improve his hard pack riding. He is more of a 10th place guy in hard pack so he will need to work on that before becoming a championship contender.

Thomas Olsen will be one to watch out for in 2016 on-board his Bobo Schmidt Husqvarna. This marks Thomas’ third year in the EMX250 championship and he wants the title before moving up to MX2. He ended up sixth in 2015 but missed a few rounds due to injuries but he will certainly be looking to improve on his sixth position!

2016 welcomes a lot of new rookies in the EMX250 class for 2016 and I expect them to be fast and open a few eyes during the course of the year. I believe a few of them could end up battling for the title.

The two new rookies I see battling for race wins and possibly the title are, Maxime Renaux and Hunter Lawrence.

Maxime was leading the EMX125 championship in 2015 before picking up an injury which ruled him out of Lommel and Assen. Even though he is French he is actually a very good sand rider as well as obviously being good in hard pack. His pre-season results have been pretty good, especially at Valence and the first round of the Dutch championship. Maxime is a big guy and will suit the 250 more than the 125 machine. I am tipping him for big things in the future – a possible future world champion if it all clicks together.

Hunter Lawrence is an extremely fast Australian who has been signed by the factory Monster Kawasaki outfit, Ben Townley recommended Hunter and his brother Jett to the team. Hunter has only been living in Holland for a few months and putting the hours in on the sand. He competed at the first round of the Dutch master’s championship and finished 9th in both the moto’s. That is a fantastic result for someone who has only spent a few months in the sand, he is clearly a very fast learner. There is no doubt he is very talented and he could potentially win races this year.

The 2015 EMX125 championship winner, Jorge Prado moves up to EMX250 for the 2016 season. Jorge hasn’t had the best of pre-season races as he adjusts to the bigger bike and it just got worse as he broke his collarbone at the third round of the Spanish championship. Unfortunately, he will miss Valkenswaard but hopefully he can make the second round. He should be near the front when he reaches his potential on the 250 and gets more strength for the bigger bike. Also, he spent a lot of time in USA riding Supercross, perhaps not the best way to prepare for your rookie season in EMX250. However, when it all clicks he has the talent to be right in the mix.

I wasn’t sure how Conrad Mewse would do in his first year on the 250 but he looks to be absolutely flying. At the first round of the British championship he comfortably finished second behind Max Anstie in both the moto’s – it just goes too show how much talent is competing at the European level.  Conrad also set the quickest lap in both the moto’s which is impressive. Conrad has very good machinery for the 2016 as Jacky Martens snapped him up. Last year, Conrad wasn’t great at Valkenswaard, it is a hard one too call but at worst he should be in the top ten which will give him something to build on.

Josiah Natzke just lost out on the EMX125 title last year too his team mate, Jorge Prado. Again, Josiah has the talent to get good results during the course of the season. However, he hasn’t had the best results during his pre-season so could start the season slowly. Josiah also had Ben Townley working with him during the 2015 season, he may miss working with him! Like Conrad, Josiah wasn’t great at Valkenswaard last year so I am not expecting him to set the world on fire but he will improve as the season goes on and has the potential for race podiums.

American rider, Darian Sanayei should be good and run at the front. Darian rode the EMX250 round at Matterley Basin last year for Steve Dixon and went 1-12 so he has the speed to win.  He could be a bit up and down as he will have to deal with a variety of different tracks which he won’t be used too. Darian got injured while practicing Supercross in US so has only been back on the bike for a few weeks so Valkenswaard could be a tough one for him. However, he did win a moto of the French Championship on his Bud Kawasaki, which is pleasing to see.

Darian’s team mate, Nicolas Decourt currently leads the French MX2 championship and spent a lot of time riding with Jeffrey Herlings earlier in the winter. He would have learnt a lot riding with him and should be a consistent top ten rider in the class this year now he has last year behind him which was a valuable learning year.

French rider, Mathys Boisrame could be one too watch out for on-board his TipTop Racing Yamaha. Towards the end of the 2015 season he started to show good speed in the EMX125 class but he is big guy so should suit the 250 much better. However, he isn’t great in sand so those races could be tough for him but he could certainly surprise on the hard pack conditions.

Diga Racing have signed hot prospect from Finland, Miro Sihvonen. Miro finished fifth overall in the EMX125 championship during the 2015 season. When he was on it he really was on it last season, he just seemed to struggle with consistency during the course of the season although his starts weren’t helping him. However, he is a very big guy with a heavy build so he should suit the 250 better than the 125. Miro crashed nearly three weeks ago and hurt his wrist but continued to ride, the injury is now more serious which means he needs to take painkillers for the race. He will just need to get through Valkenswaard and improve at future rounds.

Cyrill Genot is yet another rookie moving up from the EMX125 having been signed by the Silver Action KTM squad. He is absolutely brilliant in sand – he won the EMX125 round in Lommel last year. He should be strong at Valkenswaard and the sand tracks but he needs to work hard in the hard pack conditions, hopefully that is something he has worked on over winter as he has a lovely style on the bike.

There are some riders that haven’t even been mentioned that will add depth to the class, guys like Wouts, Heibye, Sileika, Klein Kromhof, Fernandez, Karka, Bengtsson, Renkens, Adams, Meier and Engelen ensures that there is plenty of depth in the class.

It is worth noting the Brits that will contest the series; Bintcliffe, Desoer, Tombs, Knight, Douglas, Norris, Dunn, Banks, Putnam, Dixon, Neal and Carpenter will all take to the line in Valkenswaard.

Some of the faster riders in the class could end up doing what Pauls Jonass, Tim Gajser and Davy Pootjes did, by moving up into the MX2 class before the end of the year if they realise they can’t win the title – they can learn more by moving up and competing in the World Championship, so don’t be surprised to see that happening. A few of these guys should really be in the MX2 class anyway, I would have liked to have seen Renaux and Lawrence make the move straight up as I feel they could be competitive straight away.

This could be the most competitive EMX250 class ever as it seems to keep improving year after year. I, for one, love this series, it’s a pleasure watching the kids getting stronger and faster as the year progresses. Last year Nick Kouwenberg ended up winning the title, can he keep hold of his title? Can a rookie snatch it off him? Can a relatively unknown rider come out of no were and surprise everyone? So many questions to be answered during the course of the season!

I can’t wait for the gate to drop at the first round in Valkenswaard. It’s going to be an exciting season, possibility the most exciting EMX250 championship chase ever!