EMX125: Who impressed in France? 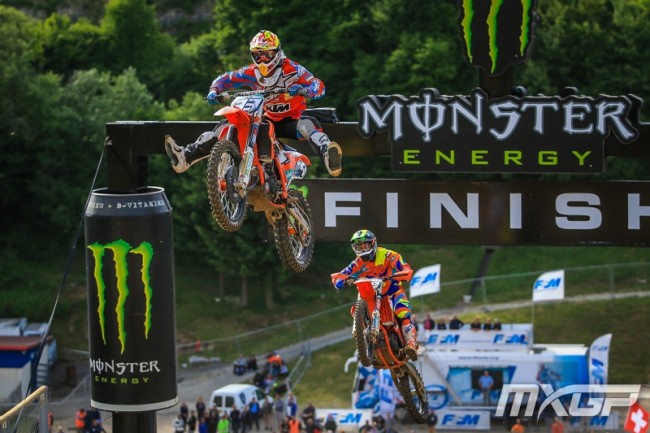 The EMX125 class has produced some great racing this year with rising stars and the future of the sport riding in this class. Gatedrop will take a look at the riders that impressed in France this weekend.

The first few rounds didn’t go so well Josiah Natzke but he has got it together after Valkenswaard as his speed and results have improved. His qualifying had been making it hard for moto’s but he seems to have got that sorted out as he was quickest in qualifying on Saturday meaning he had his best gate pick of the season. It was pretty clear he was the quickest rider in the class this weekend, he took both moto wins in devastating fashion. His recent run of results means he has caught up points on Prado and Renaux. He is now only ten points behind Renaux and fifteen points behind Prado, the momentum is clearly with Natzke at the moment. Will he be able to win the championship? I think Lommel will be the only stumbling block for him, if he can finish in the top five there then he could definitely win this title!

Belgian rider, Nathan Renkens has always been able to put fast laps in on qualifying but he struggled to put two good moto’s together this season. He is a pretty big guy for the 125 machine so he struggles getting out of the gate and that hinders him. However, in France he was able to put two good moto’s together which I am sure he will be pleased about. He was able to get a good start in the first moto, in sixth, but he was able to progress and he finished fourth in the first moto, his best moto of the year! In the second moto he good a decent start, in eight and just like the first moto he progressed another two positions to end up in sixth spot. It was a really good weekend for the Belgian as he finished fourth overall and this could give him the confidence to push on this season and achieve even better results.

Last weekend in England, Fillippo Zonta had his best ride of the season after the season didn’t start so well for him. Last week I asked the question if he could push on for a top five after a solid weekend in UK? He did just that as he finished ninth and fifth to give him a fifth overall. It looks as though the result in the UK has given him the confidence he needed in order to break into the top five. France was definitely the best we have seen him ride this season on board his Ricci Husqvarna, a podium could be possible before the end of the season if he can keep improving.

Mickeal Pichon in back in the GP paddock with his son, Zachery Pichon. Zachery rode the British round and did his home round this weekend. He is only 14 years old and had no European experience before Matterley Basin. He finished an impressive twelfth in the first moto which is really good for him. It will be interesting to see if he does any more rounds this year, if he does the rest of the series then that will give him some European experience for next year when he could be a front runner in the class.