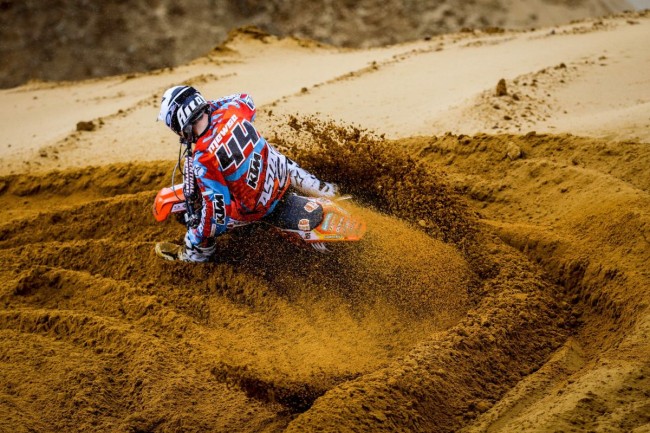 Youthstream have been putting a lot of work into the European championships in recent years and every year the series keeps getting better. At the start the emx125 championship wasn’t all that interesting but these last few years it has been great with a lot of talent arising from the class. Gatedrop will now preview this year’s championship.

The emx125 championship is a bit like a KTM championship this year, so many fast kids riding KTM’s in the class. Let’s start with the KTM factory team, they are running three riders in the class this year as they are starting put a lot of effort in the youth, Stefen Everts is working with them in order to get the best out of them!

Josiah Natzke came over from New Zealand last year and did the last two rounds and got support from the Standing Construct team. He was a bit of an unknown before Czech Republic but he managed to get an overall podium at the first round he done which was a surprise, the kid has talent! He struggled in Lommel which is no surprise as he has never seen a track like that in his life. Factory KTM were impressed with him and signed him, I feel he could be the main man for the title this year, time will tell!

It was Conrad Mewse’ first year in the class last year and he didn’t have the best of seasons but it’s a make or break year for him, he is back working with Justin Morris this year and he has always been great for him. I believe Conrad will come good this year, will he win the title? Time will tell, if this year goes well for him we might have another Brit in mx2 for 2016; that would be exciting!

Factory KTM also have Spanish wonder kid Jorge Prado, it will be his first year in the class but has been riding well in the pre-season races. He has been a similar speed to Conrad and he’s only 14 years old, this kid is definitely going to be big in the future!

One rider who really impressed me at the Italian championship races was Gabriel Chetnicki, he looked awesome, it is going to be a big year for him and he should be at the front. I can’t remember the last time a rider from Poland was successful in the GP’s so Gabriel is the next big hope from that country, it would be good to see him do well.  Unfortunately, Gabriel broke his collarbone in Germany at the weekend so he will miss the first few rounds but should be back in the UK!

Ivan Petrov missed most of last season due to injury but he will be fast, he has a good team in Marchetti Racing. I expect him to be solid and consistently finish between fifth and tenth which I am sure the team will be happy with. It will be interesting to see if he has the speed to get podiums or even win the odd moto.

There are a few fast rookies moving into the class this year as they are moving up from the 85’s and this is the next step for them.  The 2014 85cc Junior World champion Kim Savaste makes the step into the class; he has signed to ride for Marchetti racing and will receive factory support. He was a bit of the pace in the Italian championship races, but that’s to be expected! He will only get quicker as he keeps getting used to the bike, this will be a learning year for him and I expect him to go for the title in 2016.

The 2014 85cc European champion Jago Geerts also makes the step into the emx125 class, he stays with Sahkar racing for the season. I expect Jago to be fast in the sand races like Valkenswaard as he is a bit of a sand man but just like Kim he will need time to adjust to the bike, he will get quicker as the season goes on.

Claudio De Carlio set up a European team last year as he had Joakin Furbetta riding the class but now he has moved up to the emx250 class. Claudio has signed Gianluca Facchetti for the 125’s this year, watching this kid ride is so awesome! He’s still quite small but just pins it on the 125, when he grows he really will be a force to be reckoned with. Gianluca is the kid that goes crazy on the start line, save some energy for the races kid! I believe that Gianluca and Jorge Prado are the most exciting riders in the class, they are the future!

The amount of fast kids riding KTM’s is crazy; now let’s see what the other manufacturer’s chances are!

Holland have a good few talents coming up, Roan Van De Moosdijk is another one that will make the step into the class this year on a Husky. As there is so much new talent it really is hard to know how he will do but he loves sand that is for sure!

Cyril Genot rode for Kemea Yamaha last year but although he has an awesome style on the bike he was quite disappointing on the hard pack tracks.  He will ride the series for his own team this year on a Husky, if he can improve his hard pack riding I feel he can be at the front, it’s a make or break year for the Belgian.

Maxime Renaux should be good this year, he rode the first round of the ONK championship to try and improve his sand riding which is a good move. Maxime could have the upper hand in the hard pack as he’s French and he is used to those conditions. He’s riding for Kemea Yamaha this year and they will be expecting better results than what Genot delivered last year. Mathys Boisrame also deserves a mention as he is currently leading the French championship from Maxime.

Filippo Zonta is one of the most experienced riders in the class, this will be his third year in the class and he has got a good ride with Ricci Racing on a Husky. It will be interesting to see if he can step up this year and be in the top five more regularly or if he will still be a solid top ten rider.

Harry Nolte is now running his own team and he has signed Spaniard Sergi Notaria who comes in as a bit of an unknown but Harry has a good eye for talent so it wouldn’t surprise me if he did well in his rookie year.

One thing I have noticed is that there are a lot of riders from a number of different countries around the world, Youthsteam deserve a lot of credit for that and this championship as it makes for some great racing.

The thing I like about the emx125 championship is that a kid that has worked hard over the winter that I haven’t even mentioned could surprise everyone and go 1-1 in Italy. It’s going to be a great championship this year; the future is bright with the amount of talent coming through!