EMX125: The Champ to be decided this weekend! 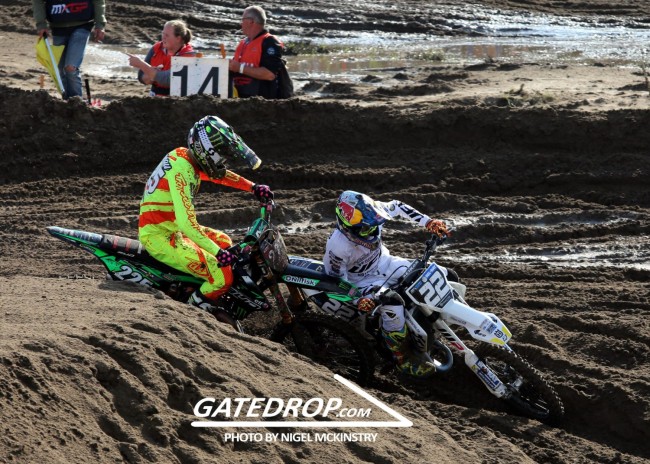 The final round of the EMX125 Championship takes place in Sweden this weekend when this years Champion will be revealed.

Heading into the last round, Brian Moreau is looking odds on favourite to clinch the title. After Lommel the momentum was with Mikkel Haarup as he went 1-1 and got to within eight points of the French rider. However, Haarup had a disaster during the second moto in Switzerland after a crash and didn’t collect any championship points. He went from challenging for the title to slipping down to third in the standings.

Moreau is an impressive young talent and has been very consistent this year. They say you win the championship on your bad days and Moreau’s worst race result was during the first moto in France when he finished in fifth. The BUD Kawasaki rider still managed to get on the podium that day too despite his worst moto result.

In fact, Moreau has only missed the overall podium once so far this year as two fourth place finishes in Ottobiano wasn’t good enough to get him on the box but his consistency has been very impressive.

Now sitting second in the series is young Italian, Gianluca Facchetti. The Maddii Husqvarna rider didn’t have a great start to the season but has improved significantly over the course of the season. Facchetti is nineteen points behind Moreau in the championship chase, perhaps if he started the season stronger things would be much closer now.

Considering Moreau’s consistency it’s going to be hard to gain nineteen points in one weekend but if something happens the French rider then anything is possible! However, Facchetti can be happy with his speed at the moment as he has proved he’s one of the fastest riders in the class and also won the World title earlier in the season which is a huge achievement.

There is no doubting Mikkel Haarup’s talent as he had some great races this year. He has actually won seven moto’s this year which is more than Moreau’s three! Haarup picked up an injury after the first round in Valkenswaard which meant he had a few difficult rounds, that is where he lost points in the championship chase. It’s a blow that Haarup won’t win any titles this year as he certainly had the speed but he has a great future in store, there’s no doubting that.

Outside the top three Kevin Horgmo has had a good season on his CreyMert KTM, he looks to have fourth secured in the championship chase. The rookie of the year award goes to Rene Hofer who sits an impressive fifth, he could be the guy to watch out for in 2018!