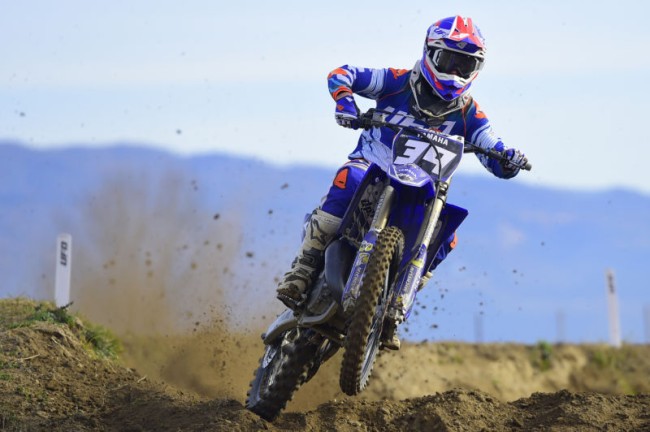 Latvia hosts the first round of the EMX125 championship this year. The series is starting rather late but that has given the kids a chance to ride plenty of warm up races to prepare for this weekend.

This time last year I predicted that Natzke would end up the series winner in 2015, I was close! Jorge Prado went on to win the series from his team mate, who would have thought that a year ago? It’s not easy to go straight into the class as a rookie and win like Prado did.

Heading into the 2016 season, Jago Geerts is looking very impressive on his Sahkar KTM machine. During the warm up races before Latvia no one can get close to him, he is a massive talent. I can’t see him not winning the title unless he gets injured. Unfortunately, his 2015 season didn’t go so well because of an injury but he showed at the end of the last year that he has the speed. Jago is the man to beat going into the season.

Who will Jago’s closest competitors be? One rider that I believe has the speed is Stephen Rubini. Stephen came into the 2015 as a privateer and a bit of an unknown. However, he showed some great speed throughout the course of the season. He missed a round and had bad luck at the last round in Assen but he still managed to secure tenth in the standings. The Silver Action KTM outfit have spotted the potential in him and signed him for this season. He goes into the 2016 season as one of the favourites and they will be hoping he can land them the EMX125 title. Being from France he is strong on hardpack and could challenge Geerts for race wins.

Roan Van de Moosdijk was a rookie in 2015 but this year will bring better things for the Dutch kid. He showed some good speed last season but his speed didn’t translate into amazing results, a bit similar to Conrad Mewse’ first season in the class. However, David Phillipaerts has spotted the kids potential and signed him for the approaching season. Roan now has good support from Yamaha and looks to have gelled with the bike in pre-season winning a few races in Italy and Dutch Nationals.  I expect to see Roan run in the top five this season now he has his rookie year behind him.

Bud Kawasaki have a great line up for the EMX125 championship. It is easy to forget about Kim Savaste but he is a guy with talent. Kim is a former 85 World champion as he won it in 2014. Last year was going to be his rookie year in EMX125 but he unfortunately picked up a knee injury. Changes for Kim as he has switched to the Kawasaki from the KTM for the approaching season. Let’s hope his knee injuries are behind him and he can work on being a front runner in the class.

Kim has a rookie as a team mate in Frenchie, Brian Moreau. Brian has been with BUD for many years now as they want to nature his talent and make him a top rider. I rate this kid highly; he will be very fast in hard pack conditions so don’t expect him to set the world on fire in Latvia but could be a front runner in hard pack. BUD Kawasaki will have a competitive team; Kim certainly won’t want his rookie team mate beating him!

Every year we have rookies entering the class as they want to chase European glory. The 2015 European and World 85 Champion, Raivo Dankers is one to keep a close eye on. So far in his career he has pretty much won everything there is to win in the 65 and 85 classes, he will want to add the 125 championship to his list. The HSF Logistics rider is still quite small and needs to grow so I think he will need a learning year before challenging for wins but the kid is seriously gifted.

ICE One Husqvarna have signed Mikkel Haarup for the approaching season, Mikkel looked awesome on the bike in Italy at the start of the year even beating Rubini who has a lot more experience. Mikkel would have challenged Dankers for the 85 titles last year but unfortunately broke his leg so this year marks his return. Unfortunately, at the first round of the Dutch Masters championship Mikkel crashed and hurt his rub so won’t be 100% fit for Latvia. However, when he gets his fitness back he could be a front runner. He might not be far away from what Prado done in his rookie year!

MJC Yamaha racing have a pair of fast rookies. Rick Elzinga – you may remember him competing with Albie Wilkie for the EMX150 championship a few years back when he was just twelve years old. The time now comes for Rick to move up into the EMX125 class, he will know some of the tracks that could help him. During the pre-season races he has had some up and done races. He could be similar to Dankers and need a year to learn everything then challenge in the 2017 season.

His team mate, Ex World Champion, Mikeal Pichon is back in the paddock working with his son. Zachery Pichon is starting to take motocross seriously and being pushed by his father all the time. He rode a 125 last year but only in France and two EMX rounds. He won’t need time to adapt to the bike and has been working really hard in the sand over winter, he has speed and could be a front runner. He is one to watch throughout the season as he wants to follow in his father’s footsteps.

Harry Nolte is running a rookie in the EMX125 class this year with the signing of Bastian Boegh Damm from Denmark. Bastian podium’d at the second round of the Dutch Masters championship showing that he is adapting to the 125 machine with ease – he ended up second overall. Denmark have a lot of talented kids coming up through the ranks and Bastian will want to be running at the front when the gate drops in Latvia.

Dutch privateer, Marcel Conijn is looking good during pre-season putting in some good results. The 2015 season wasn’t the best for him but it looks like he has stepped it up throughout winter and could surprise some this year. He is fast in the sand but it will be interesting to see his speed in the hard pack conditions.

Another rider who didn’t have the best 2015 season but looks good this year is TM rider, Sander Agard-Michelsen. Sander even won a Dutch National race a few weeks ago as he looks to build for the 2016 season.

One rider I am intrigued to see back in action is Italian’s Gianluca Facchetti. Unfortunately, he was involved in a very bad car accident last year so missed most of the season. It is great to see that he has made a full recovery and will be back in Latvia. He is definitely a rider with talent and it will be interesting to see where he fits in the class during the course of the year.

Britain’s main hope lies in Christopher Mills who is trying to follow in Mewse’ footsteps. Christopher hasn’t rode in the UK all that much as he has been racing more in Holland. Harry Kimber will also line up in Latvia with Taylor Hammal competing at four of the rounds.

The best thing about this series is that so many fast kids could surprise us all. During the first round in Italy last year Luca Milec went quickest in free practice and Glen Meier won a moto, who would have thought that?

Other riders to look out for are Raf Meuwissen, Szymon Staszkiewicz, Jeremy Sydow, Jakub Teresak, Jeremy Hauquier, Emilio Scuteri, Jan Pancar, Yuri Quarti and Petr Polak – any of these kids could surprise us with European glory when the gate drops in Latvia this weekend for the first round of the series.